Accessibility links
New Republic: From Hope To Hardball If, as Mario Cuomo once said, you campaign in poetry and govern in prose, then Noam Scheiber of The New Republic describes how running for reelection may be something akin to grunting at regular intervals.

New Republic: From Hope To Hardball

New Republic: From Hope To Hardball 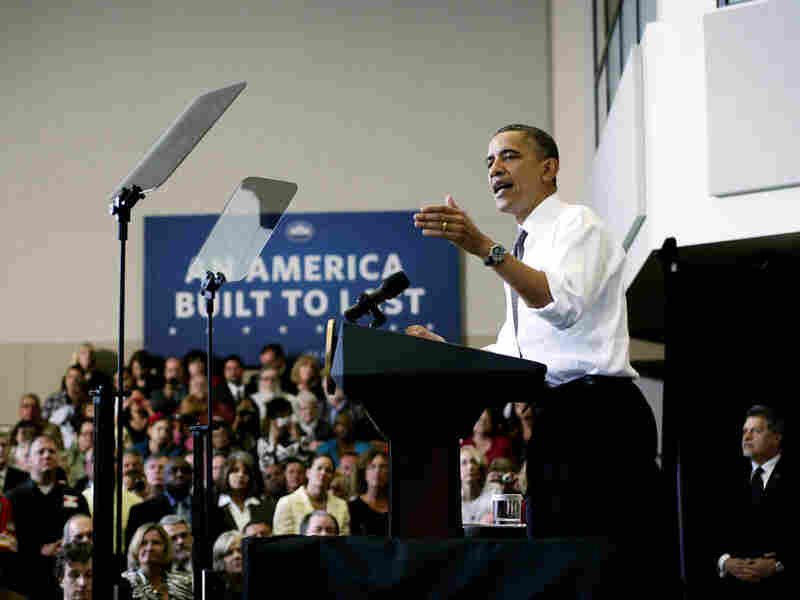 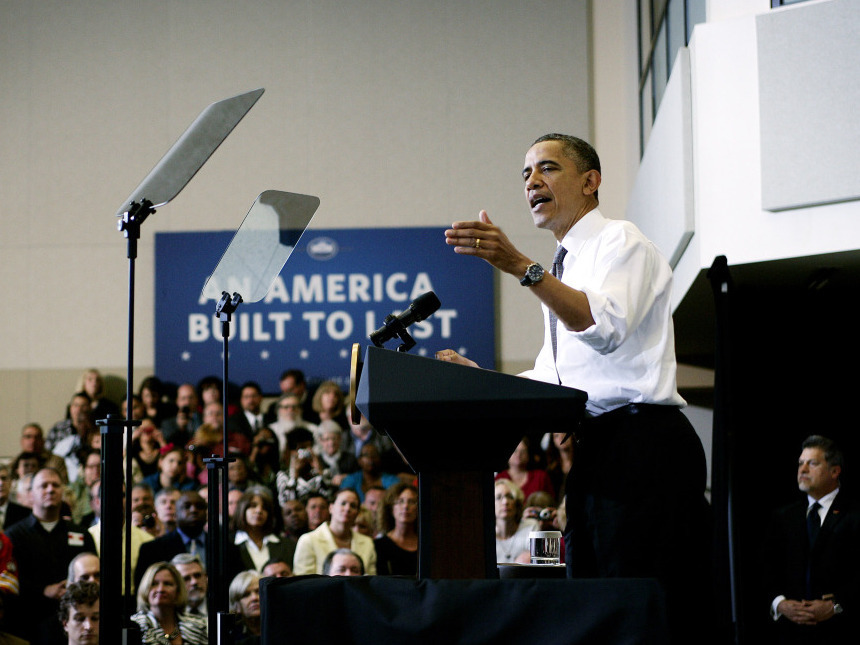 Read Another Opinion On The 2012 Presidential Campaign

Noam Scheiber is a senior editor at The New Republic and a Schwartz Fellow at The New America Foundation.

Though it was obvious to almost no one at the time, Thursday, April 5, may have certified a momentous change in contemporary politics. It was that day when Republican National Committee (RNC) Chairman Reince Priebus was quoted saying that the Republican "war on women," a favorite liberal talking point, was a creation of Democrats and the media — no more reality-based than a Republican "war on caterpillars." It probably wasn't the most outlandish comment a GOP operative uttered that hour. Yet, by lunchtime, Obama Deputy Campaign Manager Stephanie Cutter had denounced Priebus for suggesting that reproductive-health issues had all the cosmic significance of larva. Soon Cutter's aggrieved response was all over the Internet and cable television. When I spoke with one strategist close to the White House the next day, he was utterly disbelieving: "The-war-on-caterpillars thing, I'm shocked it's getting any legs."

Welcome to the Obama campaign, version 2.0. If, as Mario Cuomo once said, you campaign in poetry and govern in prose, then running for reelection may be something akin to grunting at regular intervals. In 2008, Obamaland prided itself on rejecting such brass-knuckle politicking, much of it perfected by Bill Clinton. "We don't do war rooms," was a Team Obama mantra, as one veteran of the campaign and the administration recalls. These days, by contrast, there are dozens of operatives raring to pounce on the slightest Republican misstep.

The outsized war-room capabilities are hardly the only Clintonite technique the Obama apparatus has adopted. President Obama has rewarded his mega-donors with frequent trips to the White House. And, just as Clinton did in 1995 and 1996, Team Obama has lashed a moderate GOP front-runner to right-wingers in Congress and portrayed him as a mortal threat to the welfare state.

Far from a badge of dishonor, though, the new ruthlessness is actually a sign of maturity. "It's not like Bill Clinton created a war room because he had the personality for a war room," says the Obama administration veteran. "He did it because that's what you have to do today to respond to the crazy shit that comes your way." What Obama and his team have accepted is that, while there's a lot to be said for changing politics and elevating the discourse, your most important job as president is to defend your priorities. And the way to do that is to win.

BECAUSE OF Clinton's reputation as the father of the permanent campaign and Obamaland's disavowals of his techniques, it's tempting to regard the two most recent Democratic presidents as diametric opposites. In many ways, however, Obama's presidency has followed a remarkably Clintonian trajectory. Clinton also came into office hoping to bridge Washington's partisan divide. As Bob Woodward reported in his book The Choice, Clinton was stunned when Republicans told him they would vote en masse against his deficit plan only hours into his presidency. "I didn't run for president to be a bare-fanged partisan," he told Woodward, before confessing that Republicans had turned him into one.

Both men initially responded to their respective midterm routs in similar ways. Clinton, as Obama subsequently did, blamed the defeat on the overly legislative focus of his first two years in office ("I was a prime minister, not a president," he told Woodward) and on his troubles marketing his health care plan. (Of course, Obama's plan actually passed.)

The major difference between the two after the midterms was their posture toward Republicans. Clinton went for the jugular early. By August of 1995, he had launched a major ad campaign attacking the Republican Congress for its designs on Medicare and vowing to defend the program from $270 billion in cuts. Almost daily beginning in late 1995, Clinton and his surrogates repeated their mantra of protecting "Medicare, Medicaid, education, and the environment" — that is, the programs Republicans threatened to decimate. The White House even had a nickname for the refrain: "M2E2." "It wasn't elegant — I wouldn't etch it in marble. But people fucking knew what was at stake," recalls Paul Begala, a former Clinton strategist. When Bob Dole emerged as the Republican presidential nominee the following spring, he had little hope of separating himself from his party's government-slashing ethos.

Obama, on the other hand, spent more of his third year striking conciliatory notes as he negotiated with the GOP over the deficit. With the exception of a tough, high-profile speech that April, his White House consciously avoided flaying Republicans over their proposed cuts to Medicaid and Medicare. He didn't dwell on their anti-government nihilism until a speech in December, and even then he did so in broad strokes.

The relative civility came to a clear end this month, however, when Obama turned up at an Associated Press luncheon and proceeded to lacerate the GOP over the handiwork of Representative Paul Ryan, whose budget proposal the House had recently passed. Obama talked, Clinton-style, about how the Ryan budget would squeeze seniors who depend on Medicare and bump as many as 19 million poor and disabled Americans off Medicaid. He argued that Ryan's plan would cut 200,000 children from Head Start, roll back financial aid to ten million college students, and make it harder to "protect the air we breathe, the water we drink, or the food that we eat." It was "M2E2" all over again. For good measure, Obama held Mitt Romney responsible for every letter of the Ryan plan, gleefully noting that the presumptive nominee had pronounced it to be "marvelous."

Continued At The New Republic