Accessibility links
Slowly, Myanmar Dares To Believe Change Is Real The pace of political reform in Myanmar has surprised many and, coupled with recent election results, has led to an easing of economic and political sanctions by the West. But the reforms are by no means irreversible, nor are the poor nation's myriad problem easily solved. 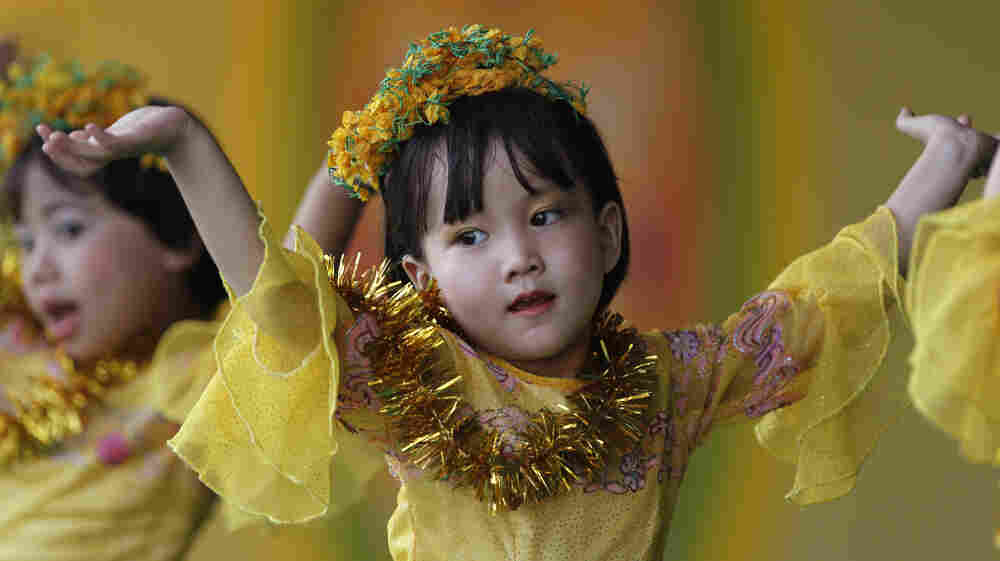 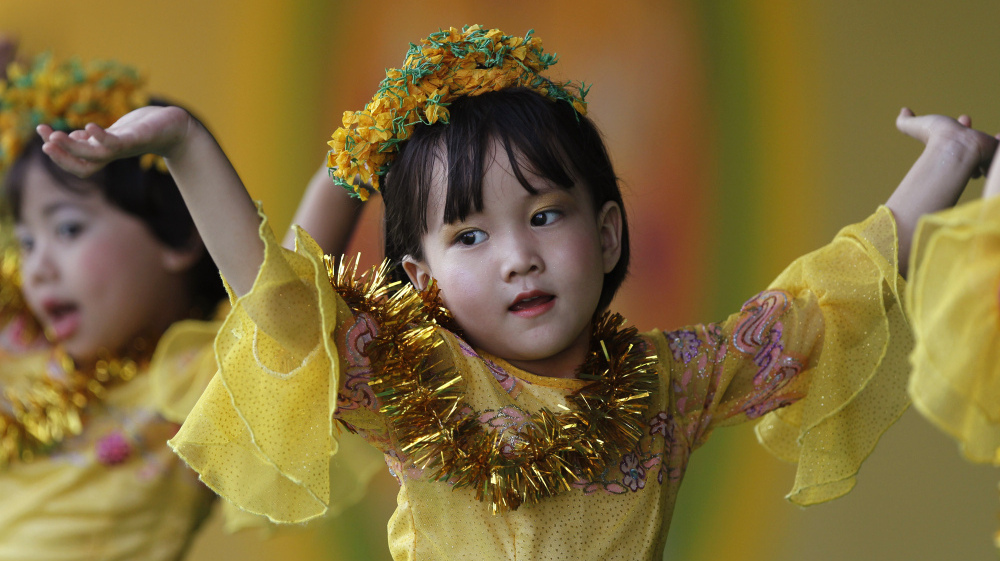 In Myanmar, there are signs in the most unlikely places that people are starting to believe recent political reforms are for real, and aren't just a trick.

Take a recent performance of the Moustache Brothers vaudeville troupe in the northern city of Mandalay.

The troupe performs in the family home — it's not allowed to perform in public. Its biting political satire, aimed at the generals and their cronies, has made the troupe a favorite of Western tourists and diplomats.

But these days, there's more music and less politics to the act, though brother Lu Maw still manages to get in a few shots, much to the delight of his audience.

"While you are [here in] Burma, please, don't take anything, don't steal anything. Government? They don't like competition," he says to laughter.

In fact, competition has played a key role during a busy month in Myanmar, also known as Burma. In by-elections on April 1, democracy activist and Nobel laureate Aung San Suu Kyi's National League for Democracy won 43 of the 45 parliamentary seats up for grabs. 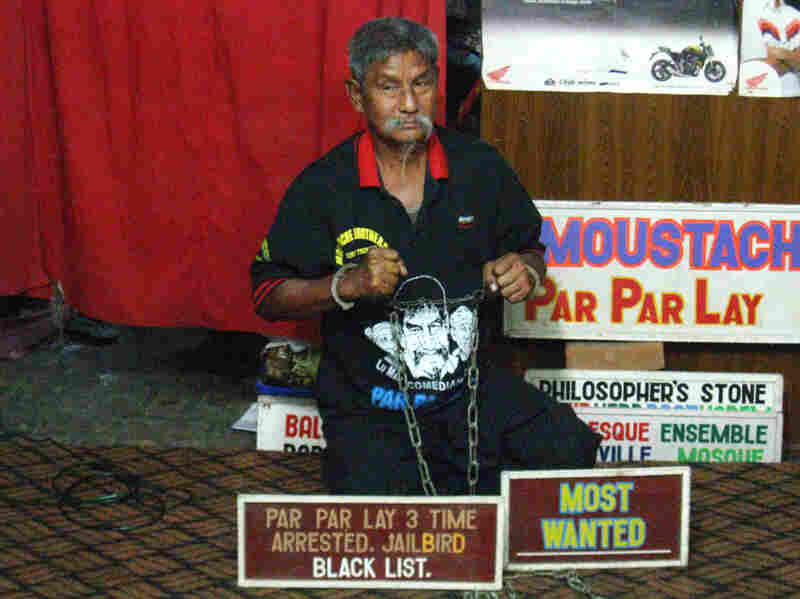 Par Par Lay, a member of the Moustache Brothers vaudeville troupe whose show includes biting political satire, performs recently in Mandalay, in northern Myanmar. Par Par Lay, who had been imprisoned, says he is not yet convinced the reforms are real. Michael Sullivan for NPR hide caption 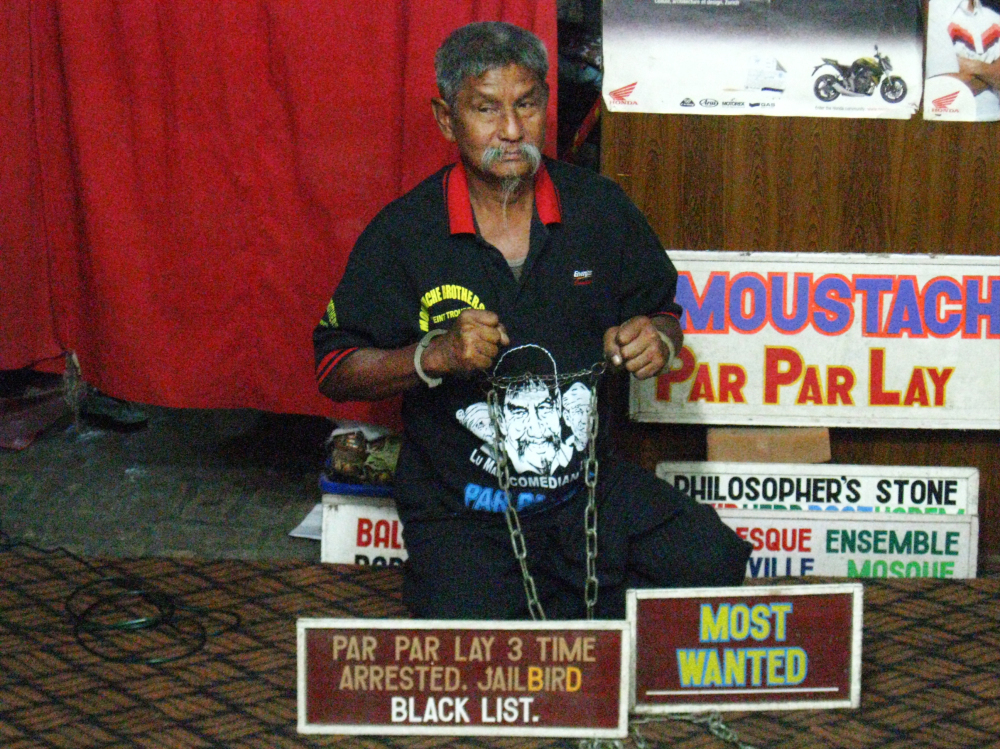 Par Par Lay, a member of the Moustache Brothers vaudeville troupe whose show includes biting political satire, performs recently in Mandalay, in northern Myanmar. Par Par Lay, who had been imprisoned, says he is not yet convinced the reforms are real.

The dizzying pace of political reform by Myanmar's military-backed government has surprised many and, coupled with the election result, has led to an easing of economic and political sanctions by the West.

But the reforms are by no means irreversible, nor are Myanmar's myriad problems easily solved.

In this new political environment, brother Par Par Lay admits the Moustache Brothers are easing up a bit. But he, for one, still isn't convinced the reforms are real.

The same guys are still in power — they've just taken off their uniforms, he says. He agrees that the changes so far have been good but notes there are many political prisoners still behind bars. Locked up by the military on three separate occasions, Par Par Lay has reason to be suspicious.

Ko Ko Gyi, a leader of the 88 Generation Students Group who spent 18 years in prison, is more optimistic. Ko Ko Gyi was one of the political prisoners released earlier this year and says he believes Myanmar's president, Thein Sein, is a "good man" and sincere about reform. He's not as sure about the rest of the military.

"Nobody knows," he says. "But we think the present government of former military leaders, they realized themselves they will have to change, they cannot go on like this."

Some say they couldn't go on because the generals feared the Arab Spring would come to Myanmar and because of their international isolation and the growing influence of neighboring China, one of Myanmar's few foreign allies.

Maung Wuntha, another former political prisoner and onetime parliamentarian with the NLD, spent eight years in jail and now publishes a weekly newspaper, The People's Age.

"They have no foreign assistance, and they are facing sanctions. And at the same time, they know the danger of China. They have awareness that Chinese exploitation in the economic field is very dangerous for the country," he says. "So this feeling probably pushed some ideas to change their mind about reforms." 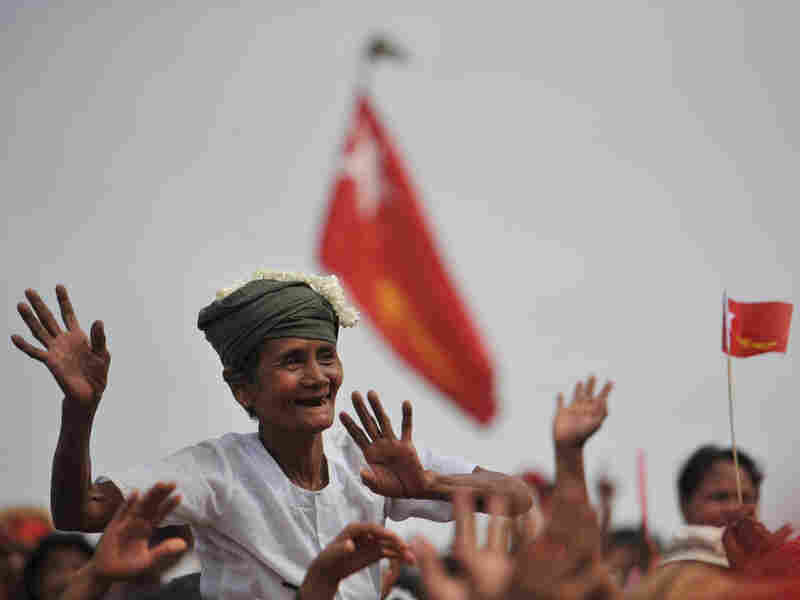 A supporter cheers on Aung San Suu Kyi, Myanmar opposition leader, as she visits her constituency during new year festivities in Kawhmu outside Yangon on April 17. Soe Than Win/AFP/Getty Images hide caption 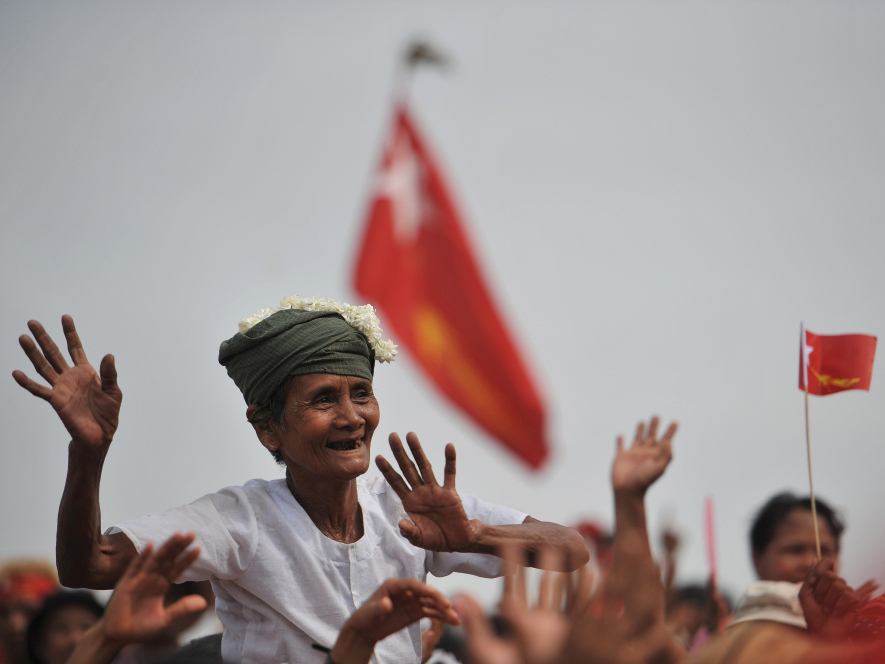 A supporter cheers on Aung San Suu Kyi, Myanmar opposition leader, as she visits her constituency during new year festivities in Kawhmu outside Yangon on April 17.

The easing of sanctions that has followed the reforms may help placate hard-liners in the military and their supporters. And it should have a positive effect when it comes to investment in the country, which is near the bottom of the United Nations Human Development Index.

The 46 countries in the low Human Development Index category receive an average of $77 in assistance per person annually, according to Andrew Kirkwood, a U.N. official. By comparison, Myanmar gets $8.

Kirkwood is director of the Livelihoods and Food Security Trust Fund, or LIFT, a U.N. project aimed at the country's rural poor. Before that, he spent six years as Myanmar country director for Save the Children.

"The children die at a faster rate here than in any other country in Asia after Afghanistan," Kirkwood says. "About 10 children under 5 die every hour, and they die of three main causes — malaria, pneumonia and diarrhea — three things that we know how to prevent and we certainly know how to cure in the 21st century."

Kirkwood says the international community has neglected the people of Myanmar for too long. He is hopeful political reforms will lead to an increase in aid but says he hopes it won't be tied to the continuation of the political process. It's not fair to withhold aid to a country's people, he says, just because you don't like its government.

"I think maybe slow or fast, but the direction is going on, going forward," he says. "This is the first step forward."

And if he's right, the Moustache Brothers may have to retool their act even further. They might even be allowed to take it on the road.