Accessibility links
'Steinbeck In Vietnam': A Great Writer's Last Reports The last piece of published writing from one of America's greatest writers was a series of letters he sent back from the front lines of war at the age of 64. John Steinbeck's dispatches shocked readers and family so much that they've never been reprinted — until now. 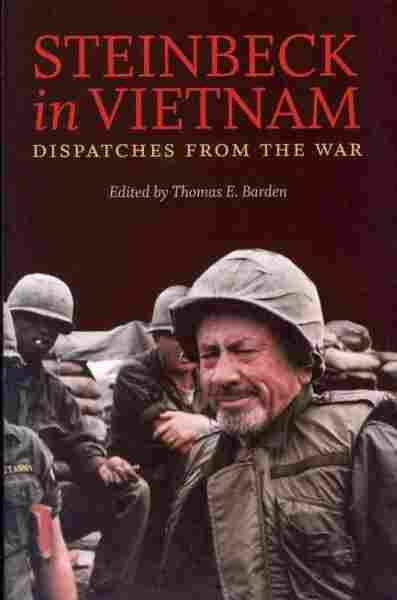 Dispatches From The War 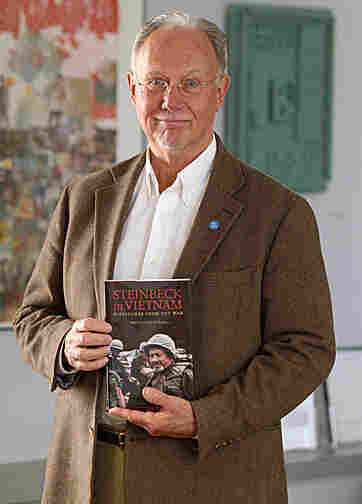 The last piece of published writing from one of America's greatest writers was a series of letters he sent back from the front lines of war at the age of 64.

John Steinbeck's reports shocked readers and family so much that they've never been reprinted — until now.

Steinbeck won the Nobel Prize for Literature in 1962 for a life's work writing about those who had been roughed up by history — most notably his Depression-era novels, Of Mice And Men and The Grapes of Wrath. Four years later, Steinbeck left for Vietnam to cover the war firsthand.

His dispatches appeared in Newsday in 1966 and 1967 and are now collected in a volume called Steinbeck in Vietnam: Dispatches from the War.

University of Toledo professor Thomas E. Barden curated the collection. He tells Weekend Edition Saturday host Scott Simon that Steinbeck's public support for the Vietnam War was too much for fans to accept — a reaction so overwhelming that the letters were kept out of public view for years.

"People worried about his reputation, saying maybe we should just never speak of these again. A lot of people on the left felt that it was a deep betrayal," Barden says. "That attitude sort of went on for a long time — including within his family. I think his widow really didn't want them out."

At first, Steinbeck had been dubious about working for Newsday, which was owned by his friend Harry Guggenheim, Barden says.

"But then the war in Vietnam heated up, and one of Steinbeck's sons was in it, and his other son was going to it, and then suddenly he wanted to be there," Barden says. "So he made this arrangement with Guggenheim that he would go on behalf of Newsday."

Steinbeck had another high-profile friend — President Lyndon B. Johnson — who also wanted him to report on what was happening in Vietnam, but Steinbeck was adamant that he wasn't going there on Johnson's behalf; he was his own man and not involved with the government. His reports, however, did seem to support the war.

"If you read the dispatches, it's as if he truly believes it as much as Lyndon Johnson did — Domino Theory, the winnability," Barden says. Even Steinbeck's own son confronted him — in Vietnam — to argue that the war was wrong — "that all the troops were stoned, that the body count wasn't accurate, that it was a mess and we ought to get out. So they went at it right there from when they met in the hotel in Saigon."

But Steinbeck did have doubts about American involvement — he just didn't publicize them.

"In private letters, which he was writing at the same time, he was sort of indicating, this is kind of a mess," Barden says.

"He's going to be around forever. High school students still love him. And I see a sense of completeness. I just want ... everything this man wrote should be on the shelf. And now it is."

Read an excerpt of Steinbeck in Vietnam