Accessibility links
In 'Veep,' Washington Is Viewed With A Skeptical Eye Julia Louis-Dreyfus returns to series television in HBO's new series, Veep. From the creators of the well-regarded political satire In The Loop, it sees American politics with a clever, doubting eye.

In 'Veep,' Washington Is Viewed With A Skeptical Eye

In 'Veep,' Washington Is Viewed With A Skeptical Eye 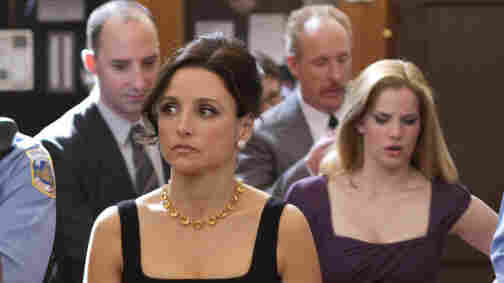 There are two ways to go with television shows about politics. You can go aspirational — that's the tradition that gives us political drama and gave us The West Wing, which suggested that for all its flaws, government is a fundamentally honorable and decent place in which many fundamentally honorable and decent people are trying to do the right thing. The other way to go is cynical and mocking. That's the tradition that gives us political satire and gives us Veep, the new HBO comedy starring Julia Louis-Dreyfus as Vice President Selina Meyer.

Veep comes from Armando Ianucci and Simon Blackwell, who have worked extensively in British television and are best-known to American audiences who know them at all as two of the men behind the wonderfully funny, spectacularly profane In The Loop, which was also about the gruesome workings of politics – in that case, British and American politics simultaneously.

To the many people who love In The Loop, seeing Ianucci and Blackwell sink their teeth – their sharp, angry teeth – into American political operatives so close to the president is a delicious proposition, as is the return of Julia Louis-Dreyfus to series television. Louis-Dreyfus turns out to be a marvelous fit for their particular form of spat-out dialogue, in which everyone with even a glimmer of intelligence is constantly irritated, in part because they're ever-aware of both the amorality and the mundaneness of everything they're saying. The supporting cast includes Anna Chlumsky (a veteran of In The Loop), Tony Hale (Arrested Development), Reid Scott (My Boys), and Matt Walsh, who's been in everything from The Hangover and The Daily Show to Community and Happy Endings.

Veep isn't a mockumentary, with the hand-held style and the talking heads to camera, but it is shot in a very unadorned fashion that does have a documentary feel. That leaves room for the constant chatter to feel less choreographed than it would in most similar comedies; it plays with both precision and naturalism, which is a challenging balance. [Note that this trailer contains some strong language.]

Note: In this trailer for Veep, some language is bleeped, but some is not. Specifically, they seem to think F-words need bleeping, but S-words do not. Go figure the logic of these things.

Most of all, it's consistently funny. The comedy comes primarily from the fact that everyone involved – both Selina and every member of her staff – is both freakishly dedicated and at least partially incompetent. Selina expects the staff to protect her from making mistakes, undo mistakes she makes in spite of their efforts, and take the blame for any mistakes that can't be undone. It makes her rather loathsome, except that that's the way they see their jobs as well. It's just the way it's done, and it's the same for everyone in their world. There's very little grumbling on display, despite the fact that everyone here seems to have a terrible job; they're so deeply buried in the Washington power structure that they can think of nothing except advancing within it, presumably so they can be mistreated by a better and better class of people.

It's quite brilliant to set a comedy in the vice president's office. It leaves open the opportunity to get into the minutiae of log-rolling and boring meetings and drab receptions, but it doesn't require the kind of attention to detail that would be called for if you were trying to depict the daily activities of the president. It is an underlying theme of Veep that the vice president doesn't have a lot that she absolutely needs to do, and she therefore spends a lot of time in a very purely distilled political world, in which she has almost no policy to think about at all. She has only the polishing of her personal brand to consider. And there's a lot of pressure there, because her pride is under constant assault, as she tries in vain to get senators to show up for her receptions and asks her assistant over and over whether the president has called. (He hasn't. He doesn't. Ever. He is, you might say, her Great Pumpkin.)

Everyone here gets to be both the buffoon and the buffoon's victim, depending on the moment. Sometimes, Selina is demanding that her staff do the impossible and they are frustrated; sometimes, her personal aide Gary (Hale) is being overly attentive and she is frustrated. There's enough back and forth that you feel for everyone sometimes, and that prevents it from being just an abusive boss and a saintly staff or a harried boss with nothing but idiots on her team.

The strong cast, great writing and appealingly loose style make Veep yet another strong entry in the Sunday night television races. And I'll make this prediction right now: Look for Julia Louis-Dreyfus to nudge her way into the Emmy nominations this fall.

Programming note: Check back Sunday for an interview on Weekend Edition with Julia Louis-Dreyfus, who talks about Selina Meyer, "kind of" having authority, and lots more.