Accessibility links
What Zac Efron's Beard Means For Men And Women In Hollywood Zac Efron really wants to be taken seriously, and six years after High School Musical, he makes an interesting case study in sexy movie stars for girls and for women.

What Zac Efron's Beard Means For Men And Women In Hollywood

What Zac Efron's Beard Means For Men And Women In Hollywood 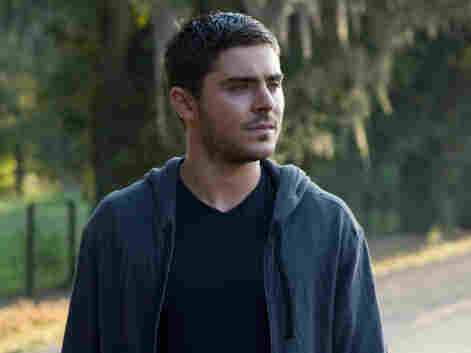 Zac Efron plays Logan, a former Marine with all kinds of feelings, in the new film The Lucky One. Patti Perret/Warner Brothers Pictures hide caption

This is the weekend they try to make Zac Efron a grown-up movie star.

Efron has made a lot of money for a lot of people; he was an industry before he was 20. High School Musical, which aired when he was 18, is a comically bad piece of film, but it was a jaw-droppingly successful product that later led to a TV sequel and then a theatrical sequel that made more money at the box office than musicals of which somewhat more is thought, including Evita, Yentl, Moulin Rouge!, or Little Shop Of Horrors.

In a savvy maneuver that repositioned him – but not too much – Efron shimmied over from the first High School Musical in 2006 to Hairspray in 2007, which put a stake in the ground early that his plans went beyond the Disney Channel. He made the same point in 2008, when he made his biggest-yet grab for respectability in Me And Orson Welles, which cast him as a high school student (again) who gets a job with Welles in 1937. In Welles, he was directed by Richard Linklater and danced with Claire Danes in a movie almost no one saw.

After that came the comedy 17 Again, in which he played a man trapped in the body of his high school self. It was largely scoffed at by critics but it made decent money and is not terrible, which about sums up what was going on in Efron's career at that point in terms of recognition versus respect: A headline that said "Zac Efron Vehicle Not Terrible!" was useful. He then made the corny Charlie St. Cloud, a piece of treacly magical realism that pumped him up a little bit physically but took him right back to a very Disney kind of place and petered out commercially. 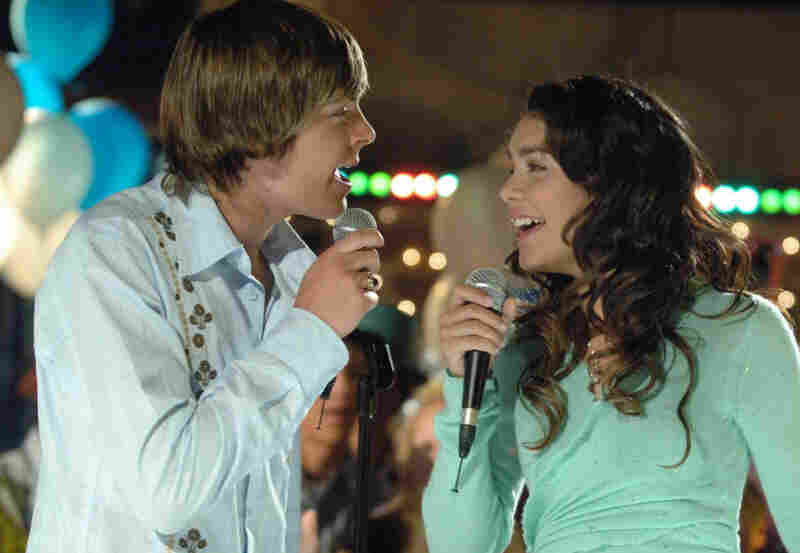 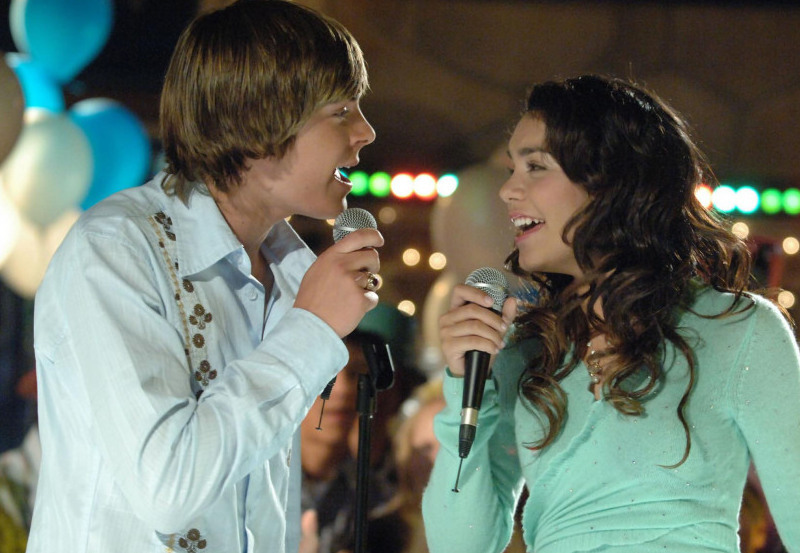 And it starts with the face. Efron's face in High School Musical was nearly featureless. Aside from bright blue eyes, all you get from that face is a beige thing with teeth. A year or two later, he'd develop a taste for tailwind hair – the same style Justin Bieber long sported, where the hair sticks in pieces to the cheeks, as if a stiff wind is forever at your back. But at first, it was just shaggy and unformed. And, of course, beige. He would later show cheekbones, but they belong to his angularity, to the way he showed up in 17 Again all narrow in the hips and slender in the limbs, and when he puts on muscle — as he has for The Lucky One — they vanish again. Back then, he didn't seem to have them at all.

A funny thing happened in Hairspray: his eyebrows came of age, cinematically speaking.

Dark eyebrows and dark hair made Zac Efron look completely different. He never went back to the dirty blond, and he never went back to the unstructured cut. After that, it was all darker and always very much constructed: his '30s period hair in Me And Orson Welles, his literally clean-cut good boy style in Charlie St. Cloud, and the precisely sculpted high-school dreamboat 'do in 17 Again.

In The Lucky One, his first fully adult role, he's added a thick, dark scruff to go with the short cut of an ex-Marine. (Yes. Zac Efron is an ex-Marine.) With his long lashes, dark brows, dark hair, and sad o'clock shadow (every hour is sad o'clock in a Nicholas Sparks movie), he's gone from a wash of beige to something that's supposed to communicate substantially more brooding complexity. All the secondary sex characteristics are cranked up to Extra High, just in case you still see the hairless basketball player who wiggled around on the Disney Channel. He's also bulked up – USA Today recently reported he put on 20 pounds of muscle, and it shows. He's gone from being a boy that girls watch when he dances to a guy you're meant to admire as he tosses heavy things off a truck. He even physically overpowers another guy in this movie; in a past role, he got thrown against a light pole by a guy playing Orson Welles. 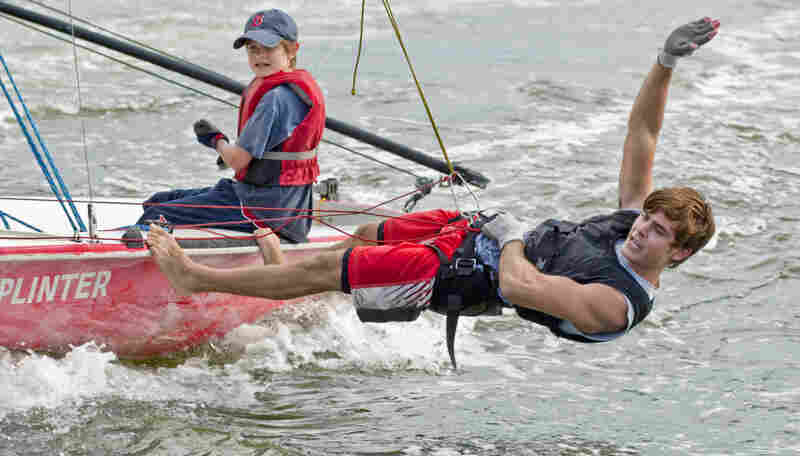 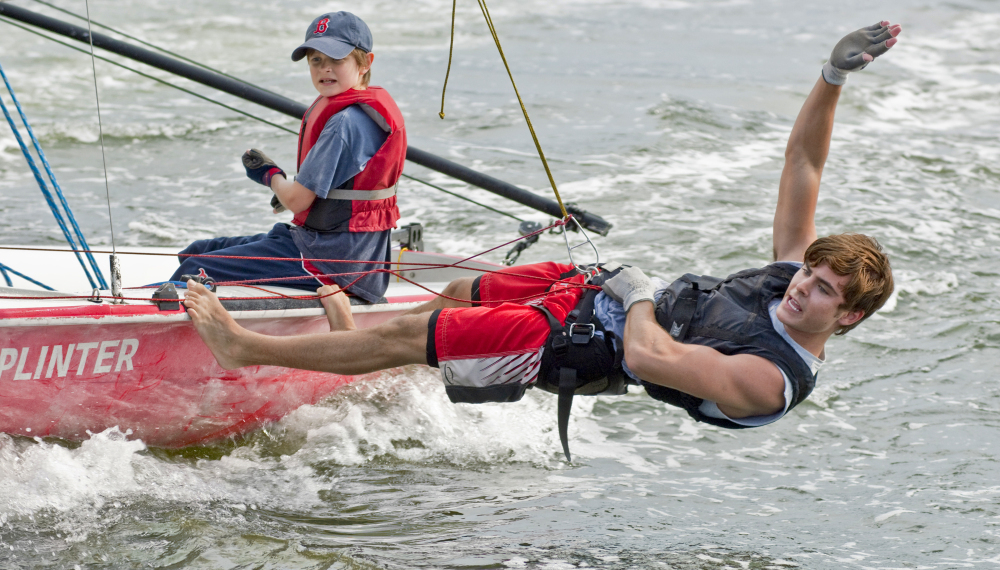 And then, of course, there is sex. The Lucky One is Efron's first on-screen sex scene, really – his sex life was off-screen in Me And Orson Welles and limited to a kiss-and-fade-to-black scene in Charlie St. Cloud. And that one was with a girl who was not, in a strict, corporeal sense, present at the time. (Remember, magical realism!)

Here, he gets a fairly steamy shower scene in which – hold your breath, High School Musical fans – mouths do not remain exclusively on mouths, and arms and hands do not remain energetically wrapped around necks and shoulders. As important as it is to appear uninterested in sex if you're going to be a Disney hero, that's how important it is to appear very good at sex if you're going to be a Sparks hero.

Sex isn't the only thing high school romantic heroes do not have in common with their older counterparts, of course. As recently as 17 Again, Efron was all about emotional fragility. He'd been that way to a fault since High School Musical, in which a lot of his emoting – his terrible, regrettable emoting – consists of repeat appearances of this face. 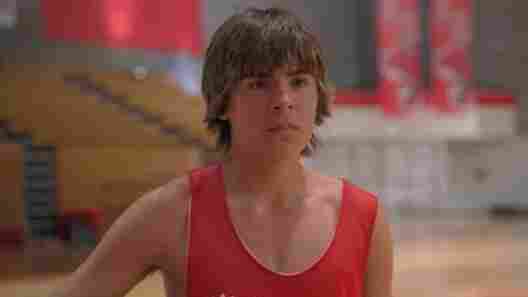 While The Lucky One is not a good movie at all, it does have the advantage of demonstrating that Efron has learned to emote inward, a little. Even when he's been pretty good, which he was in Hairspray, 17 Again and Me And Orson Welles, he's tended to express emotion by quavering gorgeously. Here, the quavering is kept to a minimum. The pain is more the "I'm crying on the inside; my tattoo and I aren't too happy you had to see us this way" kind of pain. 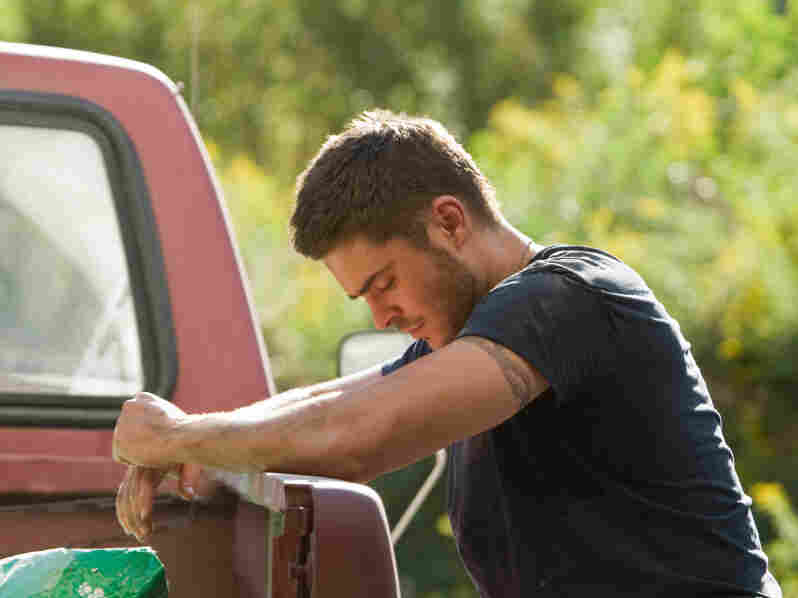 Zac Efron feels something about something in The Lucky One. Alan Markfield/Warner Brothers Pictures hide caption 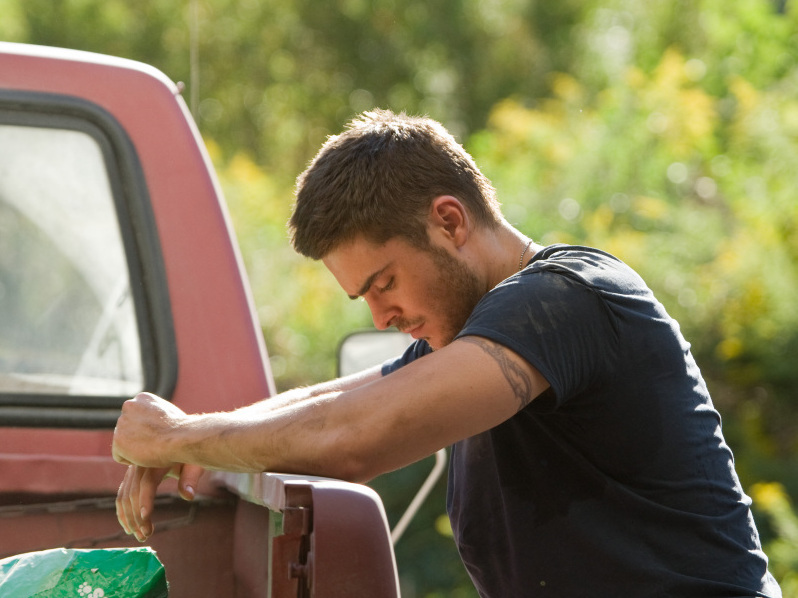 Zac Efron feels something about something in The Lucky One.

In his early films, of course, vulnerability wasn't the problem; he was all kinds of vulnerable. His romantic moments came from finding courage to stand up to his father, or the school bullies, or his disapproving friends, or (in the case of Hairspray) racist television executives.

In The Lucky One, on the other hand, he plays it very steely (or as steely as he gets) for most of the film. He's a man of few words, this Logan the ex-Marine. What eventually warms the heart of Beth (Taylor Schilling) is the precise mix of revelations of sweetness that every other movie like this contains: he's good with animals and children, and he has a hidden artistic talent (here, it's playing the piano). There have to be lots of big emotional moments, of course — Sparks writes books in which only love and grief are truly transformative. But in the movies, those moments are a bit harder to come by than they are with soft-cheeked teenagers.

For Hollywood, romancing 12- and 13-year-old girls means seeming like the world's nicest boy who, underneath it all, has the guts to stick up for you and do the right thing. But romancing 18-to-49-year-old women means seeming like the world's toughest, strongest guy (a Marine!) who, underneath it all, is also gentle and kind. Girls young enough to be watching movies on the Disney Channel get the sweetness first and the hidden strength second; women old enough for a shower sex scene get the strength first and the big heart second.

Believe it or not, the play Zac Efron is making here, the play he wants to make, is the Ryan Gosling play. Gosling, too, started out as a Disney kid (on the Mickey Mouse Club) and got his first movie-star moment in a Nicholas Sparks movie, The Notebook. Of course, Gosling had spent a couple of years in between being recognized as a huge talent in a way that has absolutely not yet happened with Efron, and there's no reason yet to believe it's ever going to.

His next big project is his starring role in The Paperboy, directed by Lee Daniels (Precious) and co-starring John Cusack, Nicole Kidman, and Matthew McConaughey, which will be at the Cannes Film Festival in May. It cannot be denied that that's a lot better than a lot of people were expecting from him just six years ago, when he was a newly minted Disney Channel star.

He's been successfully sold to girls for years, and now they're trying to sell him to the same women who, just a couple of months ago, made The Vow a $124 million hit. Don't be too shocked if the beard helps Zac Efron make the leap.