Accessibility links
Made In The USA: An Export Boom Two years ago, President Obama laid out a goal to double American exports in five years. Today, American products and services are in demand around the world, but that's not the only reason the U.S. is on pace to meet Obama's goal. 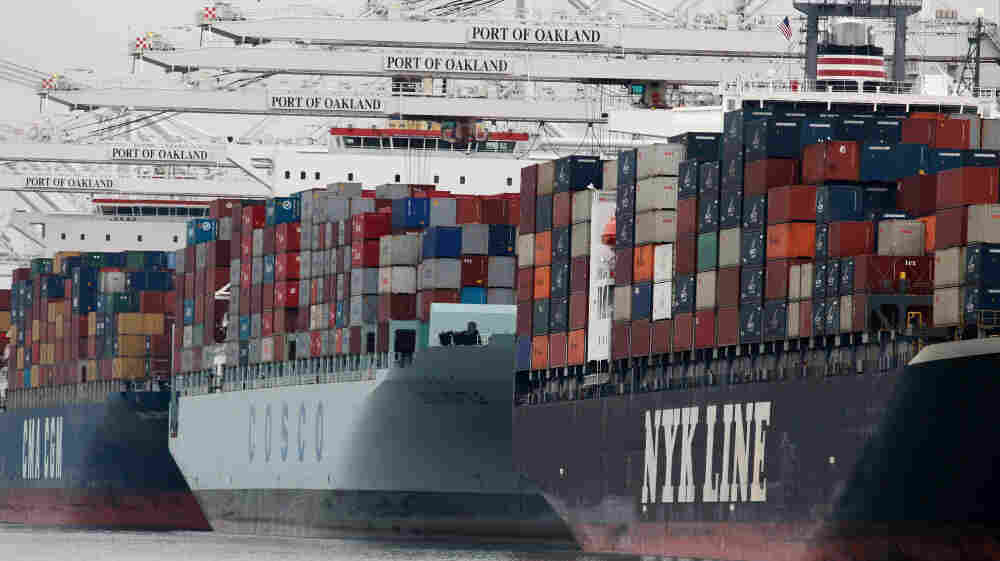 Container ships are positioned under cranes at the Port of Oakland in California. U.S. exports are up more than 30 percent from just two years ago, when President Obama set a goal of doubling U.S. exports in five years. Justin Sullivan/Getty Images hide caption 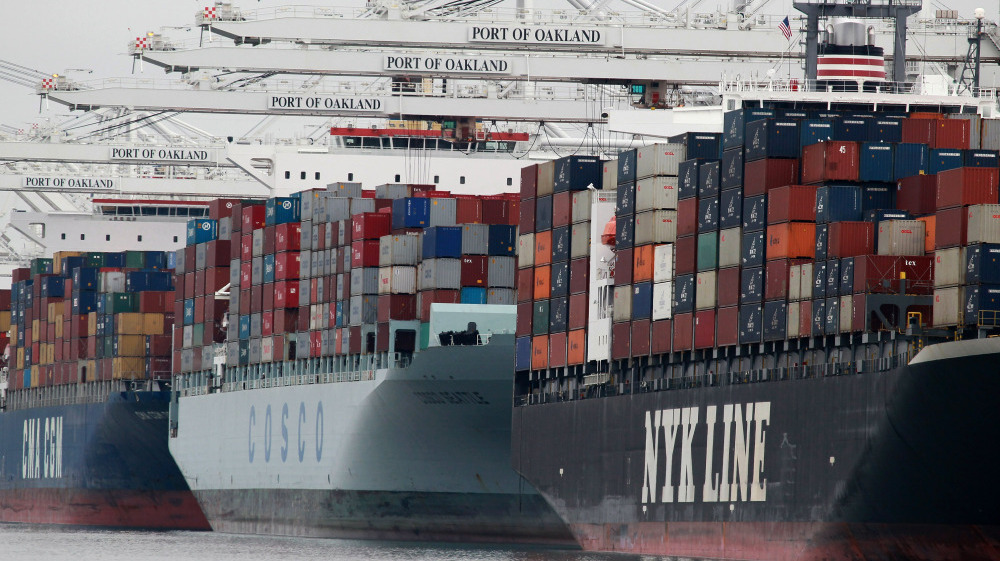 Container ships are positioned under cranes at the Port of Oakland in California. U.S. exports are up more than 30 percent from just two years ago, when President Obama set a goal of doubling U.S. exports in five years.

In his State of the Union address two years ago, President Obama argued there were a few things the U.S. needed to do in order to recover from the economic recession: One of them was to export more of goods around the world.

"The more products we make and sell to other countries, the more jobs we support right here in America," Obama said.

That night, the president unveiled a new goal: to double U.S. exports over the next five years. It would be an increase the president said would "support 2 million jobs in America."

Most economists dismissed the pledge at the time as somewhat quixotic, but two years later, the U.S. is on pace to meet that goal. American exports are up 34 percent since the president gave that speech, and the number continues to rise.

Competitive In A Global Market

Marlin Steel, a metal working business in Baltimore, employs about 30 people and makes parts that ship all across the world.

Greenblatt says his business has almost doubled. It made $5 million in revenue last year, and much of that business was in exports, he says. This year, he's hoping for $8 million.

It's not just advanced manufacturing exports on the rise, but pork, cattle and all kinds of agricultural exportsl. Even American craft beer has found an export market.

Flying Dog CEO Jim Caruso says that increasingly, people all over the world are trying the beer from the Maryland-based brewery.

"We ship to Amsterdam; from there it goes to 19 countries," Caruso says. "The top countries for us are England, Sweden, Italy and the Netherlands."

Even in those top beer-producing countries, a competitive American product is finding a market.

Services Are Exports, Too

Another place exports are coming from is New York City — in particular, the 30th floor of a Manhattan skyscraper on 5th Avenue and 52nd Street.

That's where the consulting firm Kurt Solomon employs about 75 to 100 people. The firm doesn't actually produce a product for export; it provides management advice and strategy — and its overseas clientele is growing.

"In the past five years, we've seen significant increases," Managing Director Madison Riley says. The company is very active in China, Singapore and Japan, but also does business in Canada, Mexico, the U.K., Germany and France."

Of course, when you think exports, you probably don't think of consulting. As doing business globally becomes easier, the future of U.S. exports is just as invested in services as in the things Americans make, says the nation's top trade official, Ron Kirk.

"Four out of every five Americans is now employed in the service sector," Kirk tells Raz. "Services are a critical component of our exports, and make up about a quarter of our exported goods."

These services can include everything from legal consulting, finance, architecture, information technology and even engineering. Compared to hard goods and agriculture, it's harder to track service exports, so Kirk says the numbers might even be higher than what's reported.

And There Are Other Factors

So why, across the entire economy, has there been an increase of more than 30 percent for exports in everything from management consulting to craft beer?

Part of the increase, at least for the manufacturing side, is due to better technology, says Tyler Cowen, an economist at George Mason University who has written about the American export boom.

"A lot of it is being driven by smart machines," he tells Raz, "The U.S. has high wage rates, which is a disadvantage, but if machines are doing a lot of the work, that doesn't matter."

China factors a lot in America's export economy, too.

"As China continues to grow, America will become a bigger winner," Cowen wrote in a recent article in The American Interest.

Wages in China have been going up as the country becomes more productive, Cowen says. More production may be good, but it's diminishing the cheap labor advantage China has held for some time.

"Those days are somewhat in the past," Cowen says," so the United States and Mexico will become, in relative terms, more competitive. This will mean that we export more."

Will Jobs Grow, Too?

Now remember, the president's secondary goal with the increase in exports was to also add 2 million jobs. Cowen says growth there has been a bit more sluggish.

"Companies have become more productive by shedding workers and lowering costs," he says. "So I don't, at the moment, view exporting as a way of creating a very large number of jobs, but it will create a lot of output and profits."

So not every business or worker is necessarily benefiting from the export boom in the U.S., and Cowen says that could ultimately lead to a polarization of economic outcomes.

"If you're an owner of capital, a business ... or someone with technical skills that works with smart machines, I'm extremely optimistic," he says. "[But] if you're someone that is not that skilled and faced with dysfunctional education and healthcare systems, then I'd say I'm fairly pessimistic."