Accessibility links
Wartime Translator Explores Her 'Father's Country' Saima Wahab left Afghanistan for the United States as a young girl, but she returned to her home country as a Pashto translator for the U.S. military. In her memoir In My Father's Country, Wahab describes the difficulty of straddling two nations at war. 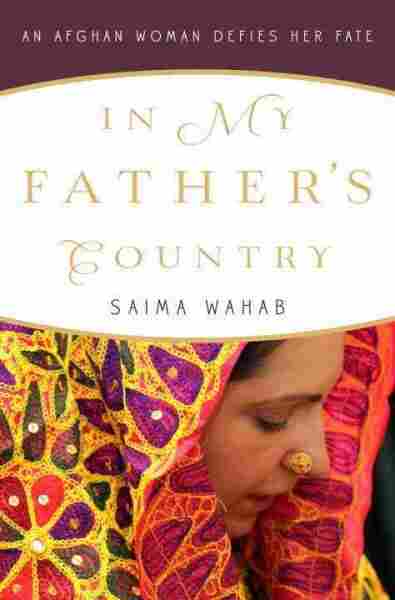 In My Father's Country

An Afghan Woman Defies Her Fate

As an Afghan-American woman, Saima Wahab straddles two worlds — disparate places that have been brought together over the past decade by war.

Wahab has literally mediated those two worlds. As a Pashto translator and cultural adviser for the U.S. military in Afghanistan, she often found herself standing between American soldiers and Afghan civilians.

In her new memoir, In My Father's Country: An Afghan Woman Defies Her Fate, Wahab writes about leaving Afghanistan as a young girl, growing up in the United States and later returning to her birth country.

Wahab says she titled the book in reference to her father because he was always incredibly supportive of her. Traditionally, Pashtun men fire gunshots into the air when their wives deliver a son. But Wahab's father fired his gun when she was born, too.

"When he came out and did that, people assumed automatically that it was another son," Wahab says. "And he just told them, no, it was a daughter. To this day I talk about it very proudly, because he was so ahead of his times."

Wahab says she was afraid to return to her father's country, but not for the reasons one might expect. The perils of war didn't trouble her as much as the prospect of reconnecting with a country she left long ago.

"I was afraid I might have changed so much that I would go to the country of Afghanistan and hate it," she says. "I was never afraid for my safety. I was afraid of what I might find out about myself and my connection with Afghan people."

Wahab recently joined NPR's Rachel Martin to discuss exactly what she found out about herself, straddling cultures, Afghanistan and war.

Read an excerpt of In My Father's Country

As an Afghan-American, Saima Wahab has roots in two disparate worlds, places that have been brought together over the past decade by war. And Wahab has quite literally lived in between.

SAIMA WAHAB: I'm sitting with the Americans on one side and the Afghans will be sitting on the other side. And I'm the Afghan female who's talking to both sides.

MARTIN: Wahab was in Afghanistan on and off from 2004 to 2009 working as a Pashto translator and cultural advisor for the U.S. military in Afghanistan. In a new memoir called "In My Father's Country," she's written about leaving Afghanistan as a young girl, growing up in the U.S. as an outsider and later returning to her birth country, again feeling like an outsider. Wahab admits she was afraid of going back to Afghanistan, but not for obvious reasons.

WAHAB: I was never afraid for my safety. I was afraid of what I might find out about myself and my connection with Afghan people. I felt these are my father's people. These are the people I come from. But what if I have changed so much in my normal life, the more American life that I was leading here? I was afraid I would go to the country of Afghanistan and hate it. And also how this was going to damage my family's image in the Pashtun society, because this is not something women - not even - men don't even do this.

MARTIN: And what this was, you were being asked to return to Afghanistan as a translator for the U.S. military, the occupying power in Afghanistan. That's how they were perceived.

WAHAB: Exactly. That's how they were perceived. Now, that was not the way I saw myself or the way I saw the soldiers I was working with. But it doesn't matter what I think and what I know. What matters is what the Afghans perceive to be the reality.

MARTIN: So, what was your work like? What was a typical day, if such a thing existed?

WAHAB: A typical day in a combat zone. There were a lot of meetings with governmental officials, trying to make them realize what we could offer and maybe ask them what they need help with. But then we would also go into a lot of villages in which we would hear people's complaints about everything - about life and us and the Pakistanis, the Iranians and God and everything you can imagine.

MARTIN: It was such a rarity, you, a Pashtun Afghan-American in this military climate working with the U.S. military in Afghanistan. How did Afghans respond to you when they saw you?

MARTIN: And this was the name that you used, kind of a pseudonym to protect yourself.

WAHAB: Yes, to protect myself, right. I never used my real name there. And so they would say, Mariam, they would shake their head and they would say you shouldn't be doing that.

MARTIN: Can you give us an example of a moment of a situation where you thought, oh no, this is not going to go well. They're not taking me seriously.

WAHAB: My favorite part from the book was a scene with the Malaz that were in Jalalabad, when Sherzai invites a whole bunch of...

MARTIN: He's the governor of...

WAHAB: He's the governor of Jalalabad. And he invited a whole bunch of mullah to the governor palace and then he invites myself. And one of the mullah came up to me afterwards - and this is one time when I did cover my hair - but that wasn't even enough for him, because he came up to me and he basically said, Mariam, you're going to go to hell. I'm just telling you. And he was very nice about it.

WAHAB: Yeah, like, he knew. I was like how do you know? But he basically was like, what you're doing, it is going to take you to hell. So, I...

MARTIN: What did you say?

WAHAB: I actually thanked him for his concern, because he was an older man and he was a man of God. So, I basically said thank you. I know you did your part as a fellow Muslim. You told me and you made me aware and the rest is up to me, because your duty is done. And whatever else happens, God will hold me accountable to it.

MARTIN: It has been 10 years - more than - since the U.S. war in Afghanistan began. I wonder from your perspective as someone with a role of trying to bring American troops and Afghan civilians together to bridge this big divide, where does that relationship stand today?

WAHAB: I was there in the beginning, and I remember being able to go outside and to the Afghan bazaar, for example, and being able to buy something in the store. I can't imagine doing that now, and not just because I'm female but because I would be considered an American female. So, I would say the relationship has not improved. It's actually gotten worse. But I feel that if we still take the right steps, we can still redeem it. One thing about Afghan people, about Pashtun people, is that we forgive very easily. But it has to be done in a sincere way, it has to be done so we understand and we believe that you really mean to apologize for what happened and you want to make amends.

MARTIN: Saima Wahab. Her new memoir is called "In My Father's Country: An Afghan Woman Defies Her Fate." She joined us in our D.C. studios. Saima, thanks so much for coming in.

WAHAB: You're welcome. Thank you.

MARTIN: And you're listening to WEEKEND EDITION from NPR News.