Accessibility links
Movie Interview - Jason Segel Talks Creating Comedy With The Tone Of Life Weekend Edition's Rachel Martin talks with actor and writer Jason Segel about his new film The Five-Year Engagement. They discuss Segel's take on the romantic comedy genre, his love of puppets, and the evolution of his affable onscreen persona. 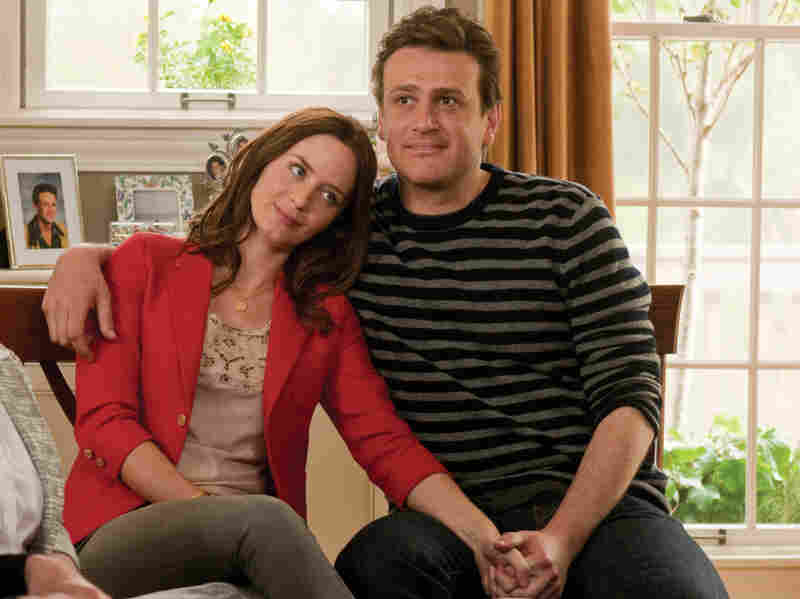 In The Five-Year Engagement, which Jason Segel co-wrote, he plays Tom, the devoted fiance to Violet (Emily Blunt), who agrees to postpone the wedding day as life continues to throw obstacles their way. Universal Pictures hide caption

More and more, audiences are getting to know Jason Segel. After featured roles in Judd Apatow projects like Freaks and Geeks and Knocked Up, Segel has gone on to star in Forgetting Sarah Marshall and The Muppets -- both of which he wrote — and he also plays a lead on the hit sitcom How I Met Your Mother.

But even as Segel is an increasingly leading man, his characters don't exactly fit the leading-man mold. They're more beta than alpha males — tall but unassuming, likeable and understanding.

It's not a stretch then that in the new comedy The Five-Year Engagement, which he co-wrote with Sarah Marshall director Nicholas Stoller, Segel plays the kind of guy who would postpone, postpone, and then keep postponing his wedding to accommodate his fiancee's career changes. Opening with a proposal, it's a premise for a romantic comedy that begins where others might end. But then since going nude in the opening break-up scene of Sarah Marshall, Segel has been known to experiment with the rom-com formula.

"The movies that I love and model after — like Annie Hall, When Harry Met Sally, and, in particular for me, Broadcast News -- [have] the tone of life, which isn't a set-up/punch line every two minutes. I think you get bored of that movie."

Segel highlights Broadcast News as a movie where there wasn't a villain, yet it worked.

"You didn't know if you wanted [Holly Hunter] to end up with Albert Brooks or with William Hurt or either," Segel says, "whereas romantic comedies today have been overly simplified — 'She's a scientist! He hates science! What will happen?'"

With Five-Year Engagement, Segel says he and Stoller aimed to make a movie about what life is like for a couple earnestly trying to figure out how to make it work while managing the logistics of jobs, moving and (eventually) wedding plans. In striking a semi-realistic tone, Segel says, they found ways to balance heaviness and sentimentality with humor.

"Just by nature of us being funny and the movie being largely improv, whenever we felt it going too far in that direction we would do something outlandish," Segel says. "There's a scene that is my favorite in the movie that we call the 'all-night fight' that is painfully real in terms of the way people fight — it's not perfectly worded. It's sloppy. It's the fight where [Emily Blunt] tells me we're going to be staying in Michigan."

"We could feel that it was getting heavy, and so I told her I needed some time alone, and then so she goes to leave, and I say 'No, I want to be alone with you here. Can you just lay here and be quiet like a normal person?'"

On the inspiration for that 'Sarah Marshall' breakup scene

"I was dating this woman for a few years, and she went away to go work, and she was gone for about six months, and when she came back she called me from the airport and said, 'Hey, I've just landed, I need to come see you.' So she drives over, and I'm like, 'This will be cute': I'm waiting on the couch completely naked in, like, a sexy pose, like the Burt Reynolds pose on the carpet, and she walks in because she has a key to my house, and I say, 'Hey, I've got a surprise for you.' And then she said, 'We need to talk.'"

"It's never, 'We need to talk: I love you so much' – I knew what was happening. And then this breakup commences while I'm completely nude."

"Picking out an outfit for the second half of a breakup is the hardest outfit you'll ever pick out in your life. And I came out in khaki pants and a blue button-up shirt like a schoolboy on fancy dress day, and I said, 'I'm wearing your favorite outfit.' And then she looked at me, she's like, 'You've never worn that outfit before.'"

On his life with puppets

"[The Muppets] were my first comic influences as a child and to a kid, they're Monty Python or Saturday Night Live. Pardon the expression, they're the gateway drug to comedy for a child.

Jason Segel: The Best Man For The Job

"More than funny, I think there's a sense of magic to it. At some point, you lose the sense of magic you're born with when you realize the world is a tough place. But puppets, you forget it's puppetry in Tim Burton movies — Nightmare Before Christmas and even Beetlejuice and things like that. It just reminded me of believing that anything could happen.

"I have a room full of puppets, but recently the puppets have been finally put in cupboards, because I realized it was off-putting to women. I think there was an intentional but subconscious signal I was sending out like, 'Hey, I'm still a kid! Don't expect me to be a full adult!' So now I decided to keep that for my private time."

On the lack of puppets in Five-Year Engagement

"There was a puppet in this, but we ended up cutting out the puppetry. Someone else made the decision because I would have fought for it, I would have fought so hard. I don't want to give too much away, but at one point I'm dating a woman who's too young for me, and she convinces me to take hallucinogenic mushrooms on Thanksgiving, and all of the food came to life, but it was too broad — it was a different movie."

On his lovable and quirky characters

"I would love to play a villain someday, in that I think that what I've done with my whole career is walk this tightrope between charming and creepy, and I always fall on the charming side — I'd like to fall on the creepy side and be like one of those very charming Gary Oldman villains."

"But I think the common denominator of all the characters is that I think it's very important to be nice in life. When I left the house, my mom said to me, 'Please don't ever forget the person you are out there is a reflection of the job I did as a mother.' So I always think the thing of paramount importance is to be kind to people."