Accessibility links
Think Tiki's Tacky? Grab A Cocktail And Think Again In Ft. Lauderdale, it's a weekend for carved wooden idols, Hawaiian shirts and tropical drinks. It's the Hukilau, an annual gathering of fans of all things tiki — as in faux-Polynesia — a fad that a dedicated legion of devotees say is back. 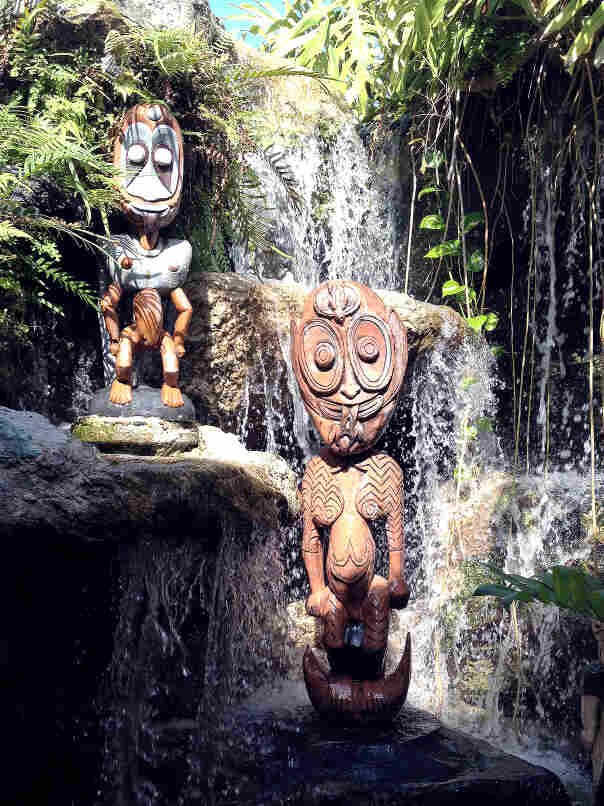 Classic tiki figures sit outside the Mai Kai restaurant in Fort Lauderdale, Fla. The restaurant is home to the annual Hukilau, a gathering of fans of Polynesian culture and all things tiki. Greg Allen/NPR hide caption 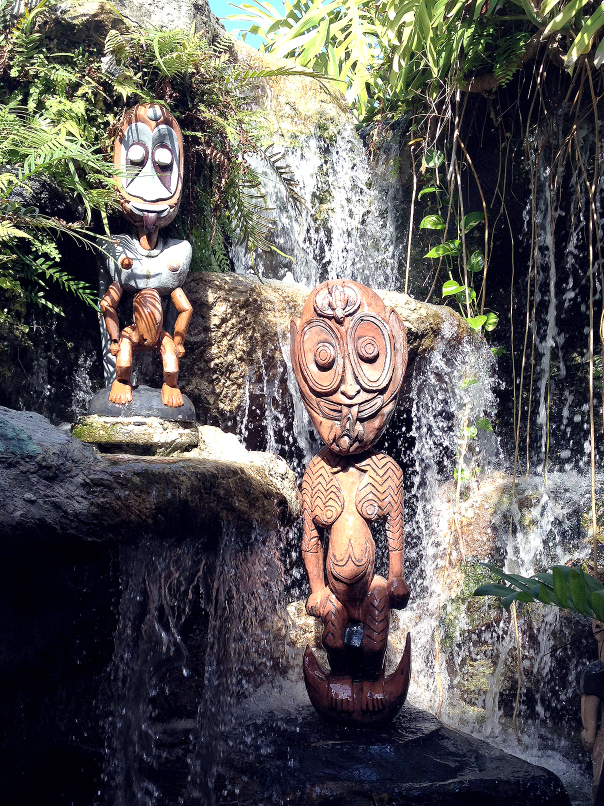 Classic tiki figures sit outside the Mai Kai restaurant in Fort Lauderdale, Fla. The restaurant is home to the annual Hukilau, a gathering of fans of Polynesian culture and all things tiki.

If you thought the heyday of Polynesian restaurants had passed, then clearly you haven't been to the Mai Kai in Fort Lauderdale.

It's a throwback, and to Tim Glazner, a treasure.

"This place could never be built again," Glazner says. "The millions they spent building it; you couldn't put this stuff together. No one could even imagine trying it now."

Glazner is one of the founders of the Hukilau, an annual convention of people devoted to tiki culture. In Hawaiian tradition, a hukilau is sort of a big festival of family and community.

For this annual Hukilau, the Mai Kai Restaurant is home. Its walls are covered by Polynesian masks, a dugout canoe is suspended from the ceiling in one dining room, and the posts and railings are intricately carved with tiki designs. When you enter the cocktail bar, the Molokai, you're suddenly on the deck of an 18th century ship, complete with three masts, sails and rigging.

This weekend, the Hukilau brought tiki fans to the Mai Kai, and also some of the restaurant's alumni, back to look at old photos and to reminisce. Dee Miller first visited the Mai Kai on spring break and soon moved here from Chicago to take a job back in the 1960s.

"We worked here in the Molokai in our little sarongs," Miller says. "We made a lot of money, and spent a lot of money. It was the place to be."

With its American interpretation of Polynesian culture, the Mai Kai still does a good business in Fort Lauderdale, serving over 1,000 customers on a typical night, says Glazner. There are no customers more devoted, however, than those who attend the Hukilau.

The event pulls in several hundred tiki fans from across the country and Europe, many of them collectors. "I would say that most of us are interested in tiki because of the vintage cocktails, the vintage clothing and the retro aspect of it," says Christie June White, who has been organizing the Hukilau for more than a decade, "but there are some people who just love the aesthetic."

The heart of tiki, it turns out, is in its cocktails. It's a world that all began about 80 years ago, with a visionary restaurateur named Donn Beach. As Prohibition was ending, he opened the world's first tiki bar, Don the Beachcomber, in Hollywood, Calif.

Place everything in an electric blender. Blend at high speed for 3 to 5 seconds. Pour into a double old-fashioned glass partly filled with ice cubes.

*Honey syrup: 2 parts clover honey to 1 part warm water. Stir until honey is thoroughly dissolved. Let cool, bottle it and store in the refrigerator. Will keep for up to 2 weeks.

It was an instant hit that spawned a host of imitators and competitors. Its main attraction was the bar's exotic and powerful drinks, with names like Missionary's Downfall, Cobra's Fang and the Zombie.

In the service bar at the Mai Kai, Berry demonstrates what made Don the Beachcomber's drinks so popular by mixing one using the original recipe — the Navy Grog.

What Berry considers the genius of the cocktail is the shots of three different types of rum: one dark, one light and one of a smoky type called Demerara. All of the ingredients are added to a blender and "flash blended" for three seconds.

"We've created something that looks great in the glass with a really nice kind of foamy head," Berry says.

At the Hukilau, another drinks connoisseur, Steve Remsburg, says the appeal of Polynesian restaurants and tiki is clear, to him at least.

"You hear the island music, you hear water dripping, the imagination takes over and then you have one of these drinks and, they're frequently potent," Remsburg says. "So, you just lose further grip on what exists outside the front door."

From the 1930s until now, tiki represents escape, a chance to get away, if just for an evening, to an exotic paradise. And at the Hukilau, tiki fans say that's an idea that will never go out of fashion.