Accessibility links
Chicago Wants Longer School Day; Foes Want Details Most Chicago public schools have less-than-six-hour school days — some of the shortest in the country. And many have no recess. Mayor Rahm Emanuel is pushing to lengthen the day to at least seven hours. But critics say some crucial details are missing — especially, how much a longer school day would cost. 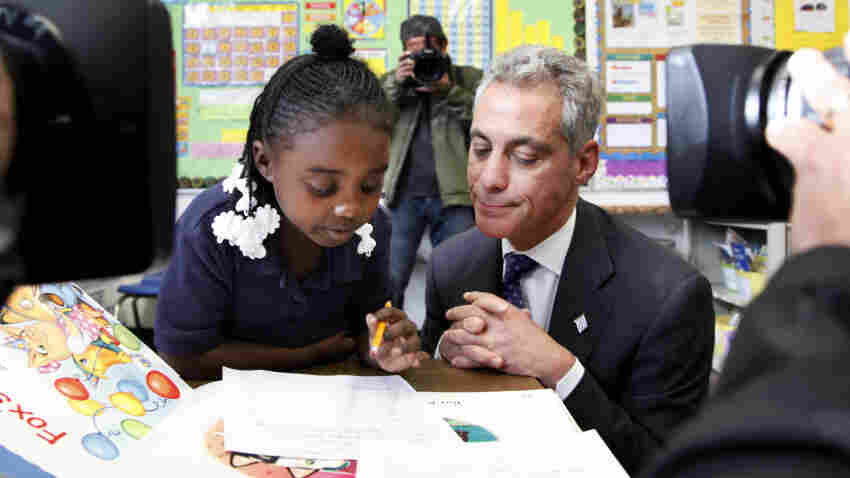 Most kids in Chicago's public schools spend just five hours and 45 minutes in school a day. It's one of the shortest school days in the country.

That's why more than half of the city's public elementary schools have no recess. At those that do, it's shockingly short.

"We have a 10-minute recess and a 10-minute lunch at our school," says Wendy Katten, mother of a third-grader at Burley Elementary School in Chicago. "It's not sufficient."

The city's mayor, Rahm Emanuel, wants to change that. Since taking office last year, he has been pushing to lengthen the day to 7 1/2 hours in every school, which would make Chicago's elementary school days among the country's longest.

At some city schools, parents, teachers and principals have agreed to a longer day. Jonathan Goldman sends his elementary-age kids to one of them, Drummond School. And the payoff for Drummond's 6 1/2-hour day? Recess, and plenty of it.

"There's a huge body of research that shows, in terms of the physical activity, that it does directly improve educational outcomes for the rest of the stuff that the kids are doing during the day," says Goldman, who is on the local school council. "They spend less time fidgeting or getting distracted in class. And they are better able to spend time on tasks for the rest of the time they're in school because they've had a few minutes to run around and burn off some energy."

Speaking recently at a magnet school that has voluntarily lengthened its day to 7 1/2 hours, Emanuel said the shorter days at most public schools create "false choices."

"And that is the notion," he said, "that teachers and principals and parents and students have to pick between social studies versus science; math versus music; reading versus recess."

But Emanuel's plan to lengthen the school day has run into resistance. Teachers balked: The Chicago Teachers Union says that while it doesn't oppose a longer day, teachers should be paid more for the extra time, they need more classroom resources, and more teachers and staff need to be hired.

And many parents complain that lengthening the school day by 30 percent is too much. So Emanuel is backing down a bit, saying the nation's third-largest school system will adopt a seven-hour day for elementary schools next year — 7 1/2 hours for high schools, with one shorter day each week — and extend the school year by 10 days.

"That comes to 40 additional days of instruction," Emanuel says. "On a five-day week, that's eight weeks more of learning." 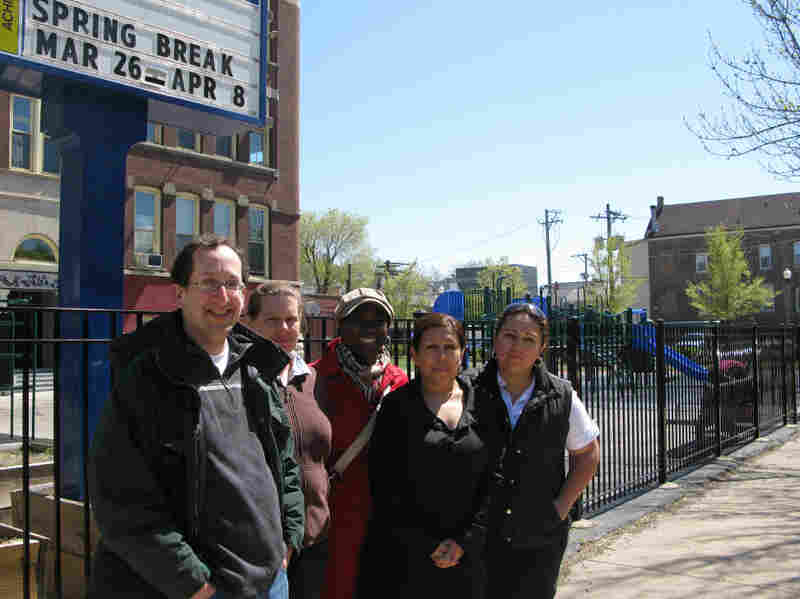 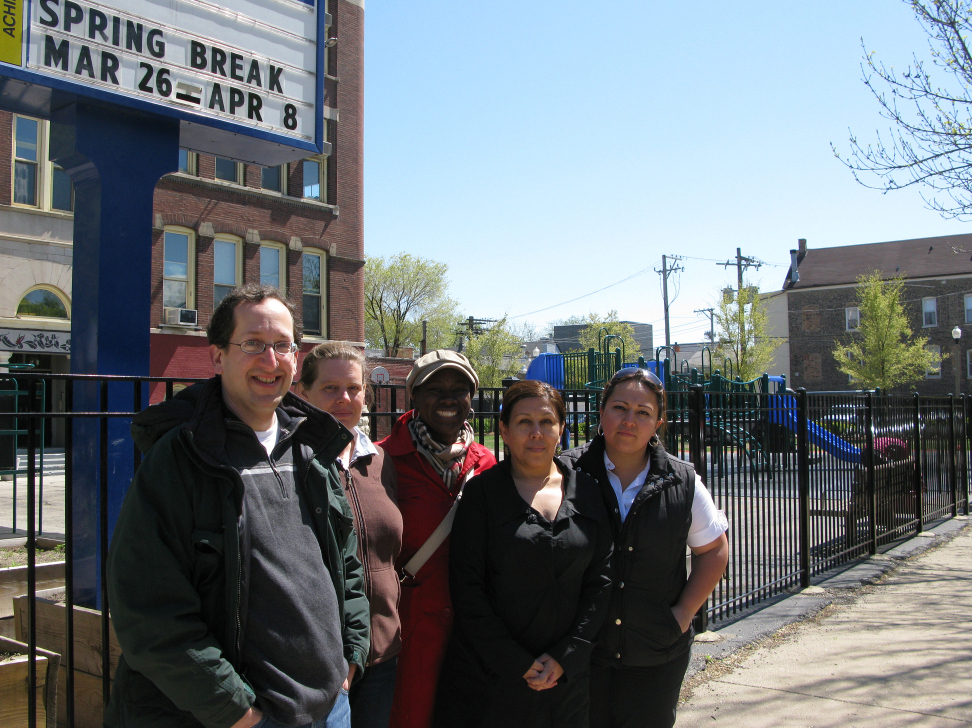 Emanuel and his school administrators say more time in the classroom is critical to improving student performance and will lead to better test scores and higher graduation rates — which, in Chicago, lag far behind the national averages.

But there is some debate, in Chicago and around the country, about whether more class time automatically produces better results.

Almost a year after Emanuel began his push for a longer day, Chicago school officials provide few details about what exactly they'll do with the extra time, or how they'll pay for it.

And that has upset many parents.

School officials have been holding neighborhood forums about the longer day, promising, without specifics, that the additional time will be quality time.

But after one such meeting, Carmen Rodriguez, who's on the local school council, PTA and several other committees at Peterson Elementary, questions the quality of the time students have now.

"I feel like it's so chaotic," she says. It's so lacking in organization. ... I just don't think 30 minutes or 60 minutes changes that. I just think it's just 30 or 60 minutes of more chaos and disorganization and poor management."

Wendy Katten co-founded a parents group pushing for equitable and sustainable funding in public schools called Raise Your Hand. She says time and quality are interrelated. She complains that Emanuel and his administrators can't just declare seven or 7 1/2 hours better, without addressing quality and the lack of resources in Chicago's schools.

"People want to know," she says, "seven hours of what? What are we getting in seven hours if they're adding this hour and 15 minutes? What's the content?"

In response to the push for a longer day, other parents around the city have created grass-roots organizations: 6.5 to Thrive, Chicago Parents for Quality Education and others. Almost all support some kind of longer school day and insist that it be a quality day — but they disagree over what length of day is ideal.

Many, including Michelle Bever of the 19th Ward Parents, are pushing for more arts, music, foreign languages and other educational enrichment opportunities. But she fears that the extra time will only be used for more standardized test prep.

"I truly, truly worry that all it's going to be is more drill and pill, and just more math and reading shoved down their throats, and none of the science and art and all the extras that should be done," Bever says.

In Chicago, few schools have the time to offer both art and music; it's often one or the other, and with part-time teachers at that. Science and social studies, once everyday subjects, are now taught only a couple of times a week, because those subjects are not tested as much as math, reading and writing.

Mayor Emanuel and Chicago school officials insist they want to add more art, music and foreign languages to the curriculum in a longer day, too, but they won't say where they'll get the money to pay for it.

The chronically cash-strapped Chicago public school system is already projecting a budget deficit as high as $700 million next year, without a longer day.

Nellie Cotton believes her kids could benefit from a longer school day, "if there were resources, if there was more funding." But she says the school her children attend, Grimes-Fleming, is already underfunded.

"As it stands, we don't have a gym that's adequate for a recess period, we don't have a playground where we can have our kids out," she says. "I mean, it's just ridiculous. I mean, there is nothing. There is no library, no art."

Of Mayor Emanuel and his frequent refrain about the longer day — that more time produces better opportunities for students — Cotton says, "He's offering opportunities. Well, I have the opportunity to go to Nordstrom's; it doesn't mean I have the money to buy anything."

Chicago school principals have until the end of the month to submit plans for what they'd like to do with the extra class time. But they've been given no idea what their budgets for the extra time will be.