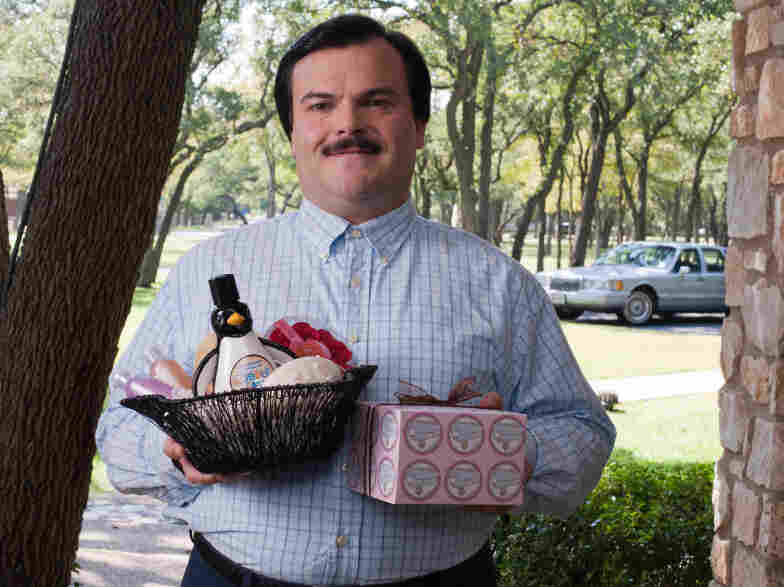 In Bernie, Jack Black plays a local mortician who murders his live-in companion after she won't stop nagging him. The movie is based on a true story. Deana Newcomb/Wind Dancer Films hide caption 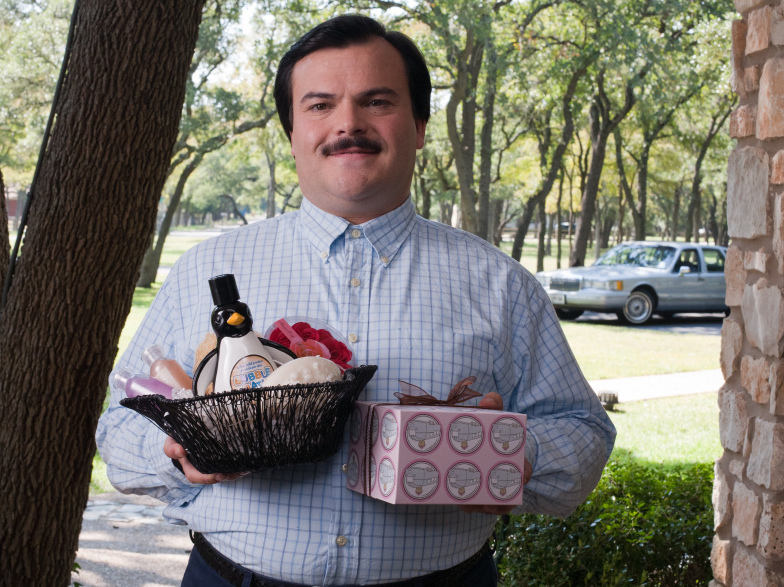 In Bernie, Jack Black plays a local mortician who murders his live-in companion after she won't stop nagging him. The movie is based on a true story.

Actor Jack Black is best known for his comedic performances in films like Nacho Libre and School of Rock. In his latest film, Bernie, Black goes to a darker place: He plays a serious small-town funeral director who uncharacteristically murders his live-in companion, a wealthy widow played by Shirley MacLaine.

The film is based on a true story. In 1996, 39-year-old Bernie Tiede of Carthage, Texas, murdered his 81-year-old companion, Marjorie Nugent, shooting her in the back four times with a rifle. A lengthy Texas Monthly article about the case notes that "what made the story peculiar was that Mrs. Nugent had been dead for almost nine months before people began searching for her. What made the story truly bizarre was the way many of the townspeople rallied around the 39-year-old man who had admitted to killing her and stealing her money — the soft-spoken, chubby-cheeked Tiede, the former assistant funeral director at Hawthorn Funeral Home who had gotten close to Mrs. Nugent when he supervised her husband's funeral."

Tiede, currently serving life in prison, met with Black for 45 minutes at his maximum-security prison before filming began.

"What was crucial was that he was really likable," Black tells Fresh Air's Terry Gross. "You could really believe that the whole town could be in love with Bernie."

Black has made a career of playing likable characters, from a substitute teacher in School of Rock to a superficial man obsessed with physical beauty in Shallow Hal. He has also simultaneously pursued a music career, performing as one-half of the satirical rock band Tenacious D.

The band's new album, Rize of the Fenix, is a heavy metal-influenced album about the power of redemption. It includes tracks like "How to Be the Best," an upbeat song reminiscent of the Flashdance theme that Black says is supposed to "inspire you to do push-ups and sit-ups and run around like Rocky."

"All those great '80s rock things — there's something so funny about that now," he says. "No one's really doing that particular brand of cheese, so we thought the world needed that right now."

The album is heavily influenced by bands like Led Zeppelin and Van Halen. Black says he grew up listening to Van Halen, but also enjoyed the vocal scat stylings of Bobby McFerrin, who became famous for his ability to sing various voices and instrumentations.

"I was obsessed with him, because I had always imagined going out on stage by myself and blowing people's minds just with the power of my singing voice," says Black. "Long before [McFerrin made] 'Don't Worry, Be Happy,' he was blowing people's minds with incredible covers of Beatles songs. ... His voice would sound like all of the different instruments."

Black says he went to every McFerrin concert he could, even running onstage when McFerrin asked for audience volunteers.

"I think I was a little too aggressive with my enthusiasm," he says. "Because he did one time tell me to tone it down. Not with words, but just with a look in his eye and a shake of his head. I knew that I had crossed the line and I wasn't supposed to be slapping my chest. That's his job."

"I don't have any real spirituality in my life — I'm kind of an atheist — but when music can take me to the highest heights, it's almost like a spiritual feeling. It fills that void for me."

"It's comedy folk rock. We're two acoustic guitars at our core and singing like Simon and Garfunkel, but then we're most heavily influenced by heavy metal bands of the '80s. And we used to make fun of the devil because the devil's influence on '80s metal is so prevalent, and now it just seems so ridiculous and hilarious. But [our] new album is more about redemption. It's a comeback-themed album."

On his first role in a commercial for a video game

"That was my big break, my first paying gig. I was so proud of that. Before I got that commercial, I just prayed to the heavens that if I could just be on television and the kids could see me from school, that would be the answer to all my prayers and I wouldn't need anything more. And I got it. I went on the auditions, and I got the part in an Activision commercial for the Atari 2600 — the original video-game system. It was for a game called Pitfall. And I remember all the lines still, to this day. I was only 13 years old."

"I've had so many hot, cheesy, corny loves of music in my life. I had a very intense Billy Joel period. So once you've really Joeled it up — there's some good periods of Joel; it's not all hot cheese. But I can't judge anyone else for their cheese. I've deep-sea dived in the Gouda."