Accessibility links
Bankrupt American Airlines Spars With Unions American Airlines is asking a judge to revamp its labor contracts. The company says it needs to drastically reduce costs to exit bankruptcy and remain competitive. The airline's unions, on the other hand, are hoping to push a merger with US Airways that may save their labor pacts. 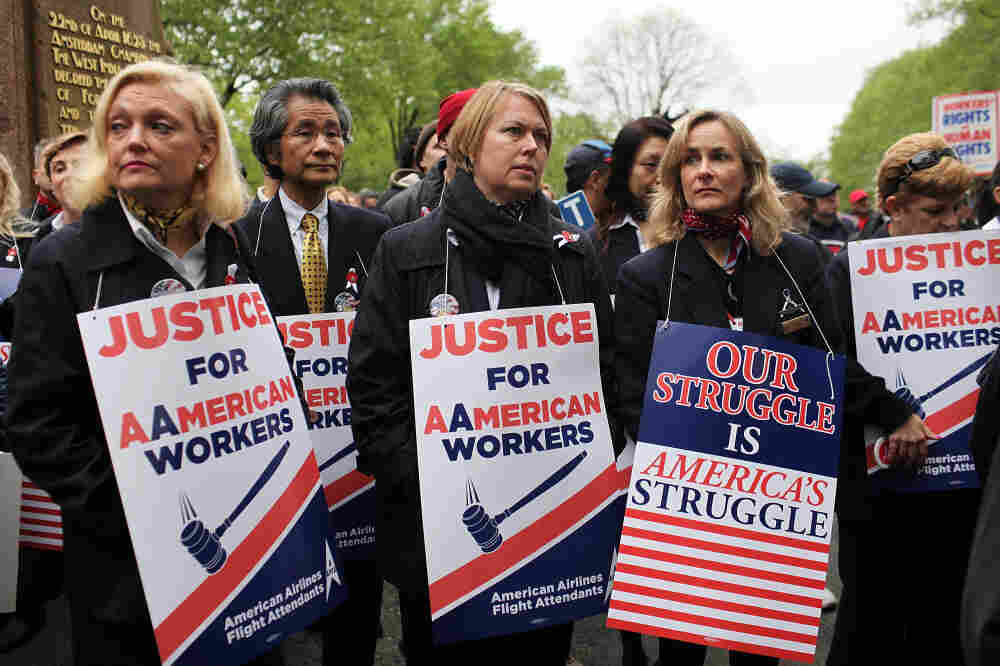 American Airlines and American Eagle employees protest Monday in New York City against American's plans to cut jobs and labor costs while under bankruptcy court protection. American is seeking permission to break up union contracts and cut expenses, but the unions oppose those plans and support a potential takeover bid by US Airways. Spencer Platt/Getty Images hide caption

With US Airways breathing down its neck, making nice with its unions as well as its creditors, American Airlines came to New York City on Monday to ask a federal bankruptcy judge for relief. Mostly, American wants relief from its unions — 13,000 jobs would be eliminated under its reorganization proposal. American has been hemorrhaging money for years and wants to lower its costs to compete.

"The fact is that our labor costs are the highest in the industry," says American spokesman Bruce Hicks. "While other airlines have gone through the same restructuring process over the last 10 years and are all sustainably profitable now, we continue to be the only major airline losing money. We've lost $10 billion in the last 10 years."

The response from American's labor unions is: "Don't blame us; blame yourselves." In 2003, the pilots, mechanics and flight attendants gave back $1.8 billion in wages and benefits. They were furious when they later discovered that American Airlines' management would keep its million-dollar bonuses unchanged. And then, of course, there's Southwest Airlines, down the block in Dallas. Southwest is the most unionized airline in the country and pays its pilots some of the industry's highest wages — and it has been making a profit every quarter for decades. Hicks admits that's true, but he says American's situation is different.

"Southwest has a number of great advantages, particularly on their work rules and productivity side," he says. "As well as a single fleet type. They're a terrific airline with great results, but that's not the contracts that we have."

Last week came a potential game-changer: US Airways made a sudden uninvited appearance and began successfully courting American's unions and its creditors. US Airways told the unions there was no need for the labor cuts to be so draconian. After 30 years of contentious relations between management and its unions, it's not going to take much to persuade American's pilots, mechanics and flight attendants to open their collective arms to a new suitor.

At a rally outside the courthouse Monday morning, Angelo Cucuzza, a ramp worker for 21 years, clarified his feelings.

"It's a sad day, it really is a sad day, and I'm still struggling to understand why we've become the bad guy," Cucuzza says. "And I mean, union workers in general, in this society, it doesn't make any sense to me. Like many of my brothers and sisters, I've got a family, I've got three children at home, you know. We struggle to make ends meet here in New York City, but we do OK. And then you've got this company here that wants to take 9,000 of my TW [transport workers] brothers' jobs — that's one-third of our workforce."

As workers protested in front of the courthouse and $1,000-an-hour lawyers made opening statements inside, American's customers were passing by. Sarah Hartong, who has preferred customer status, wants the workers to keep their jobs and for the airline to be profitable. Can she have both?

"You know, it's a hard industry," Hartong says. "They keep raising prices on consumers, but their bottom line is not looking great. Less travelers, [higher] gas prices. I don't envy them. I don't envy either position."

This week, American management will make its case to the bankruptcy judge, and then the case will take a two-week break while management and labor make one last stab at an agreement. American has until September to work this out. If the company doesn't meet the deadline, all other offers will be considered. A decision is expected by early summer.