Accessibility links
Part 2: Preparing For A Future That Includes Aging Parents Nearly 10 million adult children are caring for aging parents today, according to a study by the MetLife Mature Market Institute. But, while aging is inevitable, planning for the costs associated with dependency in the latter phase of life doesn't come easily to most Americans.

Planning a wedding is exciting.

Mapping out a vacation is fun.

Figuring how to afford care for your confused, elderly father? That one may never cross your mind — at least, not until you need more money to care for him.

"Never thought about it," Natasha Shamone-Gilmore, 58, says about her younger self. "Never ever."

She thinks about it a lot these days. Shamone-Gilmore, a computer trainer in Maryland, now shares a modest home with her husband, 24-year-old son and 81-year-old father.

Like millions of other middle-aged Americans, she had long regarded her parents as robust adults, more than capable of managing their own affairs. "My mom was a very active woman; my dad ... was a Safeway employee for 40-something years," she said.

But time does what it does, and today, her father needs a caretaker. So she has had to step into that role and figure out how to make it all work financially. 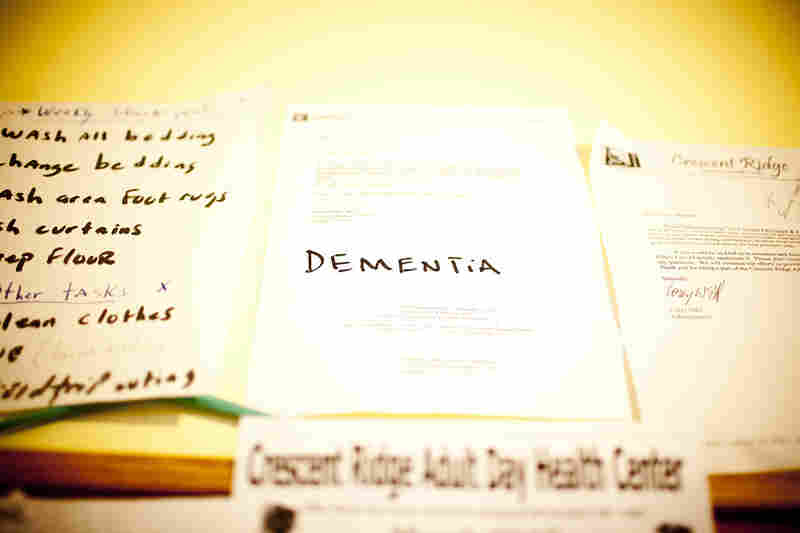 Natasha Shamone-Gilmore keeps a letter from her father's doctor diagnosing him with dementia on a wall in her kitchen. She uses it at times to remind Franklin Brunson of his condition. Kainaz Amaria/NPR hide caption 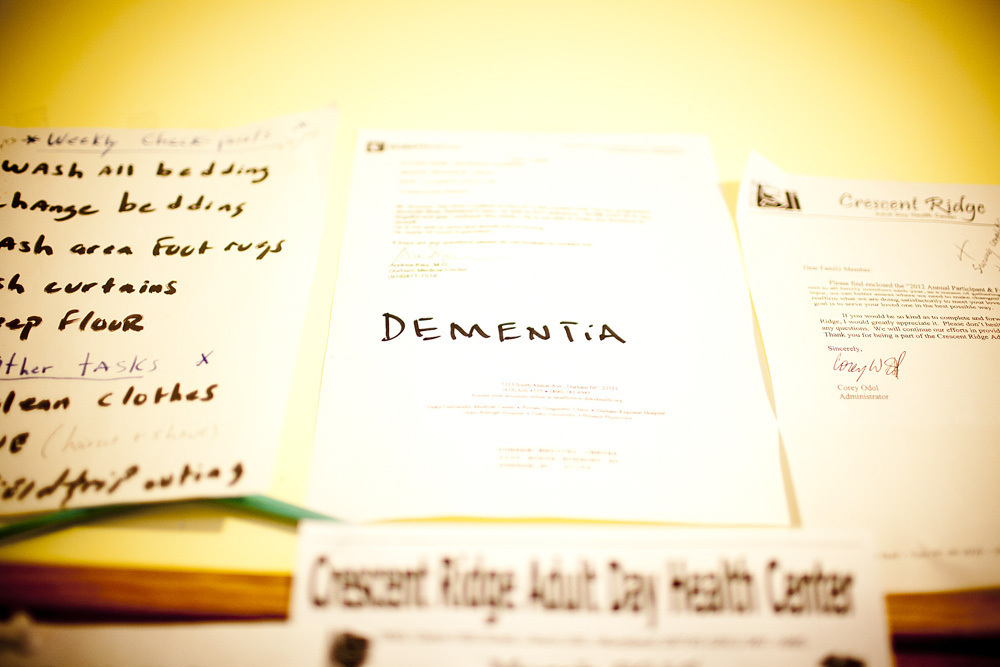 Natasha Shamone-Gilmore keeps a letter from her father's doctor diagnosing him with dementia on a wall in her kitchen. She uses it at times to remind Franklin Brunson of his condition.

Shamone-Gilmore's family is one of three multigenerational households being profiled by NPR this spring. Their stories will help highlight the importance of family financial planning. The series, Family Matters, began last week and will continue in installments each Tuesday into June.

While aging is inevitable, planning for the costs associated with dependency in the latter phase of life doesn't come easily to most Americans.

"People dread talking about it because we don't like to face our mortality," says Jack Hetherington, a certified elder-law attorney in suburban Philadelphia. He estimates that fewer than 1 person in 5 takes even the first steps needed to prepare legally and financially for taking care of an incapacitated parent.

Consider this contrast between expectations and reality:

Only 13 percent of some 4,000 U.S. workers surveyed for the 2011 Aflac WorkForces Report believe that the need for long-term care would affect their families.

The Cost Of Elder Care

Adults have been providing an increasing percentage of financial assistance to their parents in recent years. Below are the national average annual costs and daily rates paid for various types of adult care.

And yet providing long-term care is, in fact, common. Nearly 10 million adult children are caring for aging parents, according to the MetLife Mature Market Institute. Other adult children are contributing to the cost of a parent's assisted-living care, which MetLife says averages about $3,500 a month.

"The percentage of adult children providing personal care and/or financial assistance to a parent has more than tripled over the past 15 years," the research group found.

Of course, in today's tough economy, it also is common for elderly adults to be supporting their adult children. But in some ways, that's easier to accept: Parents often plan to leave whatever wealth they have to their children anyway. The flow of wealth from older to younger generation feels natural to many.

But with Americans living so much longer now, the younger generation has to do more thinking about how they might care for parents who have exhausted their savings.

"That's a tough one," says Paul Taylor, director of the Pew Research Center's Social and Demographic Trends project. "You have lots of uncertainties in your own life, let alone worrying about paying for your parents' care."

Can You Pay For Yourself, Your Kids, Your Parents?

Can You Pay For Yourself, Your Kids, Your Parents?

So like many other baby boomers, Shamone-Gilmore is struggling with bills, and hoping to reform her family for the future.

"Now that it's happened to us, and I am the household coordinator, I am now trying to educate the entire family that: You guys need to get in line," she says. "We're not thinking. No one is thinking."

Experts say any serious plan for caring for aging parents must begin — not with discussions about money — but with a legal document designating someone as having "power of attorney." That paperwork grants authority to another individual to handle decisions if a loved one can't make them as a result of illness or memory loss.

"The purpose is to provide a safety net in case of incapacity," Hetherington says. "If you wait too long and you don't have the capacity to make decisions, you end up in guardianship court, and that could involve lawyers, doctors, judges, time and money." 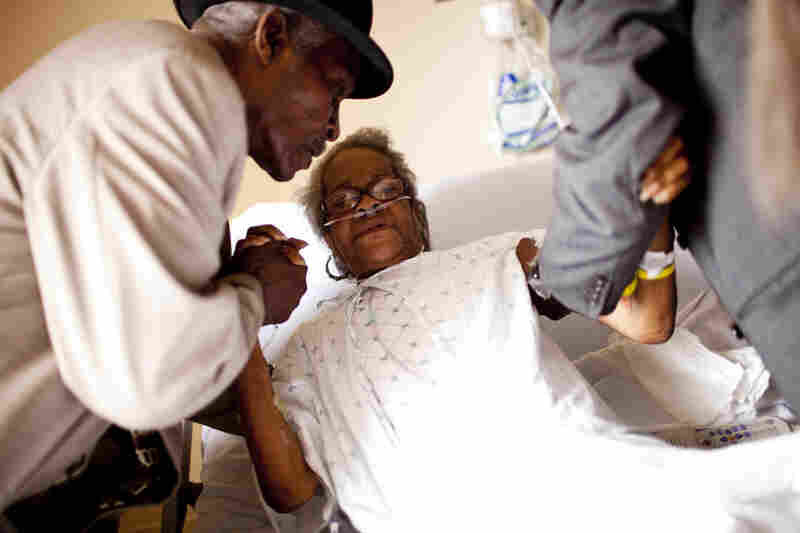 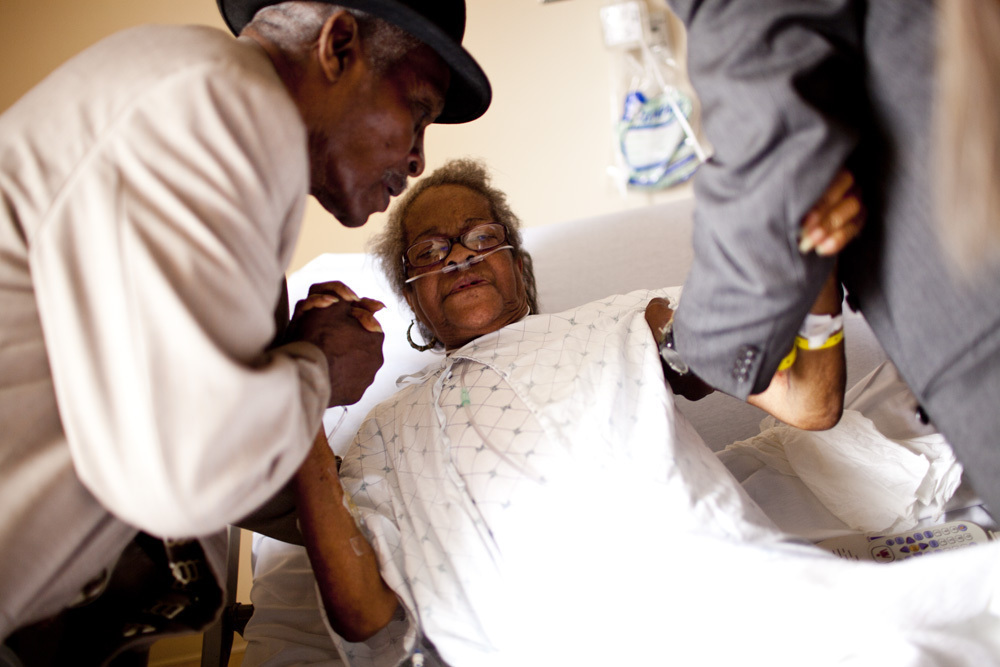 Franklin Brunson (left) and Curtis Gilmore help Natasha's mother, Luella Brunson, sit upright in her hospital bed. Along with caring for her aging father, Natasha keeps a close eye on her 80-year-old mother, who is often hospitalized with complications from chronic obstructive pulmonary disease.

Once the legal paperwork is done, families can turn to an array of sources for legitimate advice on boosting savings, buying appropriate insurance and maximizing home equity.

For example, many employers offer workplace benefits that include free financial planning services. Credit unions can help, too. Public library shelves are loaded with books on how to get started making a financial plan, and websites, such as HelloWallet and Mint.com, offer help.

Individuals can ask for professional referrals from the National Association of Personal Financial Advisors.

Hetherington says taking those first steps can be difficult. "But it's the only way of avoiding problems down the road," he says.

The introduction to the audio version of this story overstated the number of Americans living in households with three or more generations. The statistic cited — 1 in 6 Americans lives in a multigenerational household — comes from a recent study by the Pew Research Center. However, in its definition of multigenerational households, Pew also includes homes with two generations of adults from one family, for example where children over age 25 have moved back in with parents, or where elderly parents have joined their middle-aged children under one roof.