Accessibility links
'Death And The Penguin' Captures Post-Soviet Reality Ukrainian novelist Andrey Kurkov writes short, surrealistic stories full of dark comedic surprises. His latest is The Case of the General's Thumb, but critic John Powers suggests starting with his 1996 novel, Death and the Penguin. It's a fast-paced, witty read and what Powers calls "an almost perfect novel." 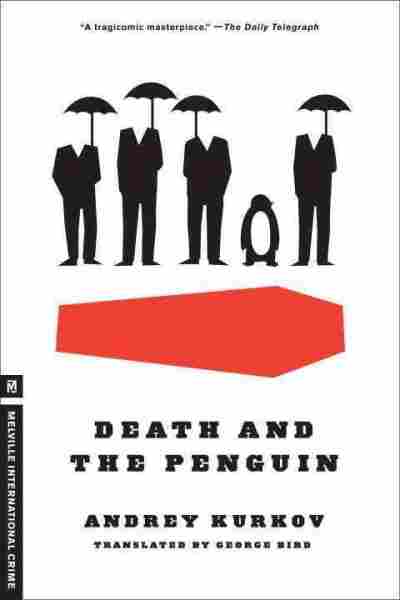 Death and the Penguin

by Andrey Kurkov and George Bird

When you hear the words "Russian novel," you probably picture something as big and heavy as an anvil. Yet ever since the fall of communism, we've seen the ascent of Russian novelists who are shorter-winded and jauntier.

The most sheerly enjoyable is Andrey Kurkov, who lives and works in the former Soviet republic of Ukraine. Kurkov writes short, sly page-turners that specialize in what we might call absurdist noir. He's already a cult writer in Europe. Now some of his best novels are being released by Melville House, one of those admirable small presses that, in our supposedly globalized age, are helping keep foreign literature from completely dying out in the U.S.

Their most recent Kurkov release is The Case of the General's Thumb, a sardonically amusing romp that's well worth reading. Yet the book I suggest you start with — and that may get you hooked — is the 1996 novel that's probably Kurkov's best. It certainly has his best title: Death and the Penguin.

Set in the run-amok city of Kiev, it's the story of Viktor, a wannabe novelist who lives with his pet, a penguin named Misha that he began looking after when the local zoo could no longer afford to keep him. To keep himself going and Misha in frozen fish, Viktor takes a job preparing advance obituaries for a local paper. Sounds promising, until Viktor's obits turn out to be a kind of hit list — the people he writes about wind up getting murdered. And that's not all. Soon, he's looking after the daughter of his dodgy human friend, Misha — called Misha-non-penguin — whose shenanigans get Viktor ever more deeply involved with the gangsters who run modern Ukraine. These thugs have their own, strange use for Viktor's penguin.

Now, if you're like me, you may be skeptical of any book about a man with a pet penguin. It sounds too cute by half, like one of those movies where a loner hit man proves his humanity by raising a bonsai or talking to his pet cockatoo. Yet Misha the penguin isn't a gimmick. Not only is he central to the plot; he is also a mirror of Viktor's own melancholy soul. Just as Misha is cut off from a sane environment for a penguin — he has been uprooted from both Antarctica and the zoo — so Viktor is trying to survive in a city that has become hostile to simply being human. 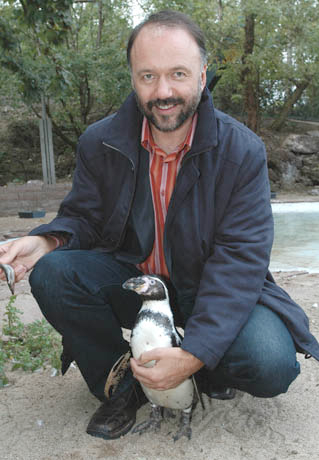 I don't know Russian, but George Bird's wonderfully readable translation Death and the Penguin comes across as an almost perfect little novel. Kurkov tells his story in a brisk, surreal deadpan that captures the mental atmosphere of a country that, since the fall of the Soviet Union, has often verged on black comedy.

Indeed, since Kurkov wrote this book, Ukraine has been through at least one rigged election, had a presidential candidate poisoned with dioxin, staged an Orange Revolution, and then voted in a female prime minister, who lost another disputed election to the guy the Orange Revolution originally threw out, who then tossed her into prison for crimes that other nations don't remotely believe she committed. Meanwhile, the mafia operates with impunity and public services collapse. Remember how Viktor got his penguin? That was true. Ukrainian zoos actually did give away their animals.

Of course, what's bad for living can be good for literature. In conjuring the bedlam of Ukrainian life, Kurkov's novels are spider-webbed with entertaining tricks and double crosses. In the new one, an honest cop goes on a wild goose chase to find the thumb of a murdered general. In another, a desolate husband takes out a contract on himself — then changes his mind, a bit too late. Spinning these yarns, Kurkov reveals a level of casual corruption so profound that ordinary people, just trying to get by, can't avoid being sucked into the muck.

But please don't think Kurkov's work is grim. It's not. It's fast-paced and witty and on the side of the angels. For all the immorality that threatens to drown them, his heroes cling, like latter-day Buster Keatons, to the life raft of their personal decency. They may not be able to change the world around them — the forces that run it are too big and too strong. But they can find odd moments of zenlike calm and, more important, perform the small kindnesses that reaffirm their humanity — like looking after a penguin that wants nothing more than to find its way back home.