Accessibility links
Melt Or Grow? Fate Of Himalayan Glaciers Unknown A few years ago, the U.N.'s climate panel warned that the Himalayas' glaciers were quickly disappearing. The claim was dead wrong. The true picture of how the ice in those glaciers is responding to a warming world is far more complex. "There are so many uncertainties that it's really hard to predict the future of the glaciers," says one scientist. 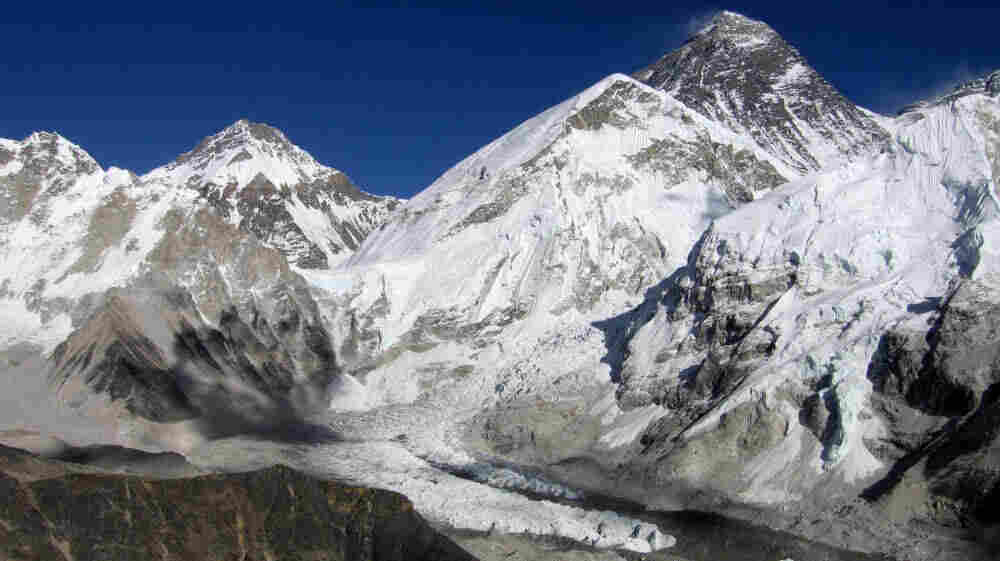 In this undated picture, Mount Everest, the world's tallest mountain at 29,029 feet, stands behind the Khumbu Glacier, one of the longest glaciers in the world. Nepal has more than 2,300 glacial lakes, and experts say at least 20 are in danger of bursting. Subel Bhandari/AFP/Getty Images hide caption

The Himalayas are sometimes called the world's "third pole" because they are covered with thousands of glaciers. Water from those glaciers helps feed some of the world's most important rivers, including the Ganges and the Indus. And as those glaciers melt, they will contribute to rising sea levels.

So a lot is at stake in understanding these glaciers and how they will respond in a warming world. Researchers writing in the latest issue of Science magazine make it clear they are still struggling at that task.

Just a few years ago, it seemed that the Himalayas were on the brink of disaster. The U.N.'s Intergovernmental Panel on Climate Change (IPCC) made alarming claims about the fate of all that ice. You can almost see Jeffrey Kargel at the University of Arizona cringe as he describes it.

"One page had the most egregious errors you could imagine, just one after another, including the claim that the glaciers would disappear by 2035," he says.

But the claim was dead wrong. The error put a lot of egg on the face of the IPCC. But it also sent glacier scientists scrambling. They knew very little about the state and the fate of those glaciers, even the basics.

For example, it is true that a billion people live downstream from those glaciers. But, Kargel says, don't leap to conclusions based on that statistic alone. "That sort of statement can be exaggerated to imply that somehow if the glaciers disappear, the taps are going to run dry for a billion people. And that's just patently not the case."

Various estimates suggest that the glaciers provide 1 or 4 or 10 percent of the water for people downstream. Mostly, though, the rivers are filled by the abundant monsoon rains. Kargel says some specific valleys may run dry, and others may flood. It's wrong to think of the Himalaya as a monolithic block of ice.

"Some areas of the Himalaya and the nearby ranges such as the Karakoram will see shrinking ice masses, shrinking glaciers," Kargel says. "But some actually are projected to increase in mass, up to a point."

In fact, scientists are seeing some glaciers gaining mass today, thanks to increased snowfall. Consider the Karakoram, home to more than 40 percent of the region's glaciers, says Tobias Bolch of the University of Zurich.

"There, the glaciers — at least during the last 10 years — are gaining mass," Bolch says, "while in most of the other regions in the Himalaya, they are losing mass."

Bolch and Kargel are among the authors of the review in Science. Bolch says scientists are starting to get a much better handle on what's happening to the glaciers right now, but he says they struggled mightily over a larger question: "What can we really state about the fate of the glaciers? There are so many uncertainties that it's really hard to predict the future of the glaciers."

Right now, the glaciers that are currently melting are losing 1 or 2 feet of thickness every year. If they continue at that pace, some of those glaciers could be gone by the end of the century.

But that's too simple a way to look at the problem. That's because our climate is also expected to get wetter as it gets warmer. And professor Michael Bishop of the University of Nebraska in Omaha says that's a critical wild card.

Scientists all around the world agree that the glaciers in the Himalayas aren't going to melt away by 2035. But ask them how long they will be around, and you will hear many variations of this answer from Bishop: "I think it's a bit premature to be able to say we can accurately predict this ... due to the complexity of the situation. I think a lot of people forget about that. They think we know all there is to know about these systems. [But] they're extremely complicated systems."

One of the biggest unknowns is about human nature rather than ice. What actions will people and governments take to slow global warming in the coming decades?