Accessibility links
Both Community And Garden Grow In 'Seedfolks' An inner-city Cleveland community is drawn closer together as it works to transform a dirty vacant lot into a lush communal garden in Seedfolks. Author Paul Fleischman says the title came from an old word meaning "ancestors." 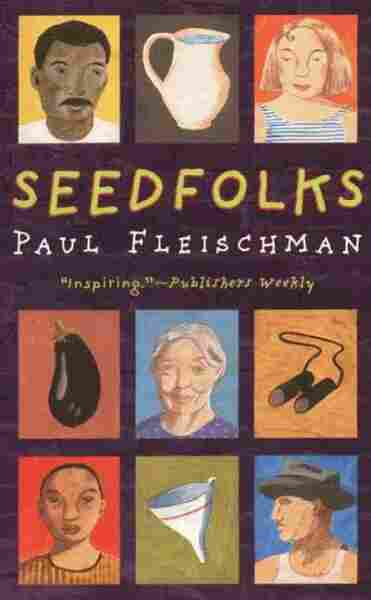 April showers bring May flowers, and in this case they bring us a selection from the garden for NPR's Backseat Book Club. Each month we ask young people to read a book along with us, and for this month, our pick is Seedfolks by Paul Fleischman.

Seedfolks takes us to the heart of the city, specifically the city of Cleveland, and a neighborhood that has seen better days. It's filled with people — mostly immigrants — who live in close proximity but barely share more than an occasional "hello." They all stay in apartments surrounding a vacant lot that, in the course of this story, is transformed from a smelly junkyard into a lush community garden.

That garden in Seedfolks is like a big green magnet. It pulls in immigrants who yearn for vegetables they can't find at local markets. It beckons the wounded who find a reason to live as they watch life sprout from little seeds. And it calls out to the elderly who find memories in the soil.

Author Paul Fleischman tells NPR's Michele Norris that he loved the idea of a garden that would help a fractured community grow toward each other, the way a potted plant reaches for the sun. Ugly as it may be at the beginning, that empty lot is the beating heart of his book.

"It's not a place that anybody had ever imagined a community garden," Fleischman says. "And indeed, the founder — a little girl named Kim — has no such plans herself. She just plants some lima bean seeds there in an attempt to connect with the father she never knew."

Each chapter of Seedfolks is named for a different character and told from his or her point of view. As their garden plots grow, their hearts grow bigger, and their world view expands. There are still hard times in this rough little neighborhood, but each eggplant and tomato is a little victory worthy of a shared celebration.

May Backseat Book Club Pick: 'Heart of a Samurai'

The entire sixth grade of Hardy Middle School — located here in Washington, D.C. — read the book, and the students had several questions for Fleischman. Backseat Book Clubber Kyra Bendal, 11, wanted to know whether any of the characters in Seedfolks were based on real-life people.

"They are," says Fleischman. "I should tell you that many people think that authors just cut and paste from real life into books. It doesn't work quite that way. Usually characters are changed, transformed, turned inside out. ... Look at Kim. She's a little girl from Vietnam. She's lost her father. I would seem to have nothing in common with her. But my own mother had died a few years before Seedfolks. A desire to make a connection with that person who has passed away is universal, and it came out in that story. I have connections like that with many of the characters."

The title Seedfolks does not simply refer to the work in the garden. It reflects a community bond. In fact, Fleischman says, the word "seedfolks" came to him before he started to write this book.

"The few words of a title are the hardest words for any author to come up with," he says. "My father used to offer my sisters and me $5 if we could come up with a title when he was stumped. And $5 back then was worth about $10,000 now. ... So if you have a great title, as crazy as it sounds, it's almost worth writing a book just to use it. It's like building a house because you have a lovely doorknob. But I had the word 'seedfolks.' I'd come across it in the course of researching another book. It's an old term for ancestors."

Fleischman's father, Sid, was, like his son, an award-winning author of children's books. He often read chunks of his latest projects to the family. Fleischman says there was no pressure to follow in his father's footsteps. But, he adds, his real education took place not at school but at home, as he absorbed the craft of writing from his father.

"We also had a hand printing press in the house," he says. "So I learned the whole visual side of language, setting type. I'm a very careful, slow writer, and I think a lot of that comes from the care required to be a hand-printer, where if something isn't spaced out enough, you take little slivers of brass or copper and put them between each letter."

The family had a printing press because Sid Fleischman was working on a book about a traveling printer, and parts of the book were absorbed into the household. "That's how we came to have chickens, as well — from an earlier book," Fleischman says.

But that hands-on approach didn't exactly work with Seedfolks. "Let it be known," says Fleischman, "I'm a terrible gardener. I'm an over-waterer." Fleischman adds that he's content going to the library and researching gardening. "Although doing it is good — that's how we ended up with the printing press and the chickens. There are things you learn from doing it that you're never going to learn from a book."

Read an excerpt of Seedfolks