Accessibility links
'Convention' Of Convicted Terrorists At N.Y. Trial The focus of the trial is Adis Medunjanin and the role he allegedly played in a 2009 plot to bomb New York City subways. But the trial itself is a milestone: It's the first time the people dispatched to carry out al-Qaida plots are being heard in open court. One terrorism expert called it a "convention of terrorism suspects." 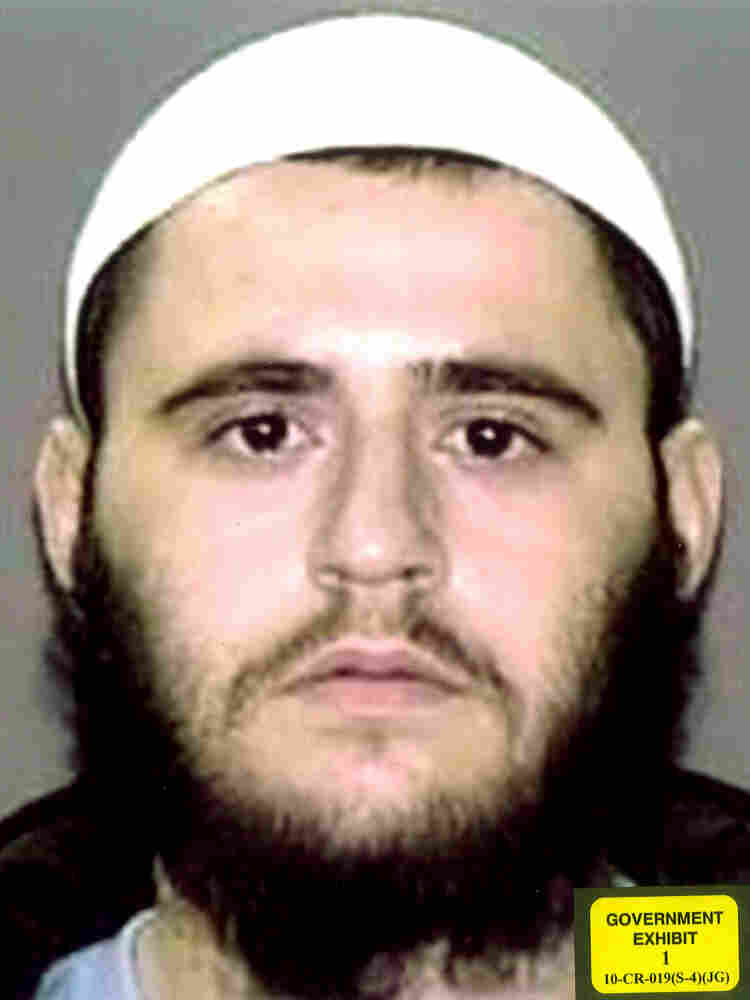 Bosnian-born Adis Medunjanin is accused of playing a role in the 2009 plot to bomb New York City subways. This photo of Medunjanin was provided by the U.S. attorney's office in Brooklyn, N.Y. AP hide caption 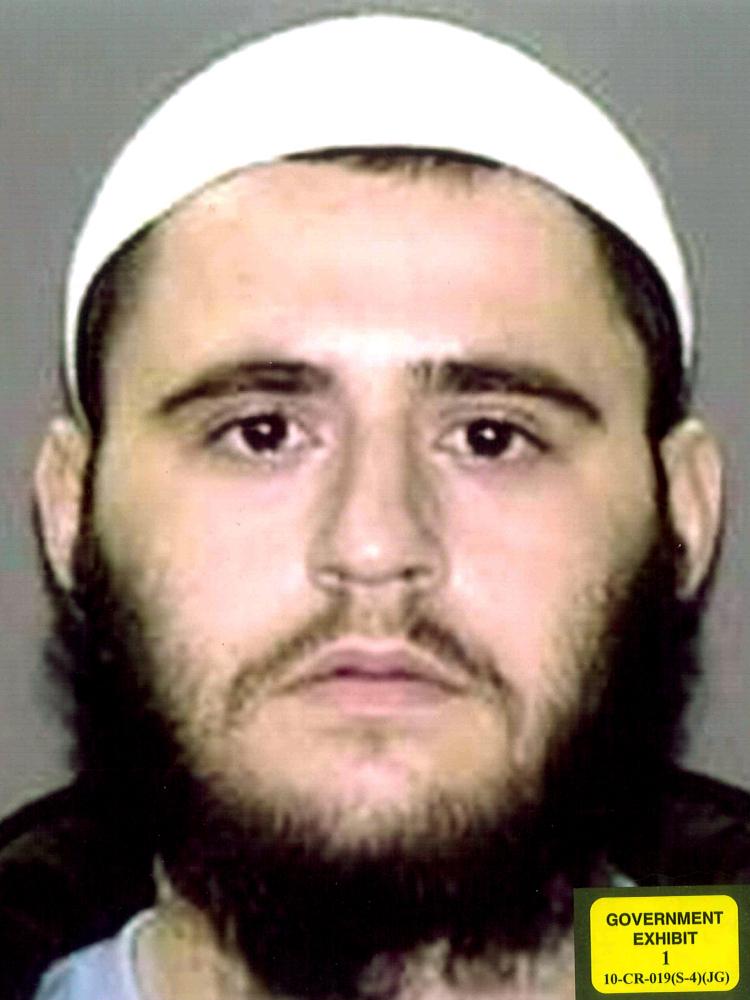 Bosnian-born Adis Medunjanin is accused of playing a role in the 2009 plot to bomb New York City subways. This photo of Medunjanin was provided by the U.S. attorney's office in Brooklyn, N.Y.

There have been hundreds of terrorism trials in the U.S. since the attacks of Sept. 11, 2001, but the case unfolding in Brooklyn, N.Y., is different. While its focus is on defendant Adis Medunjanin and the role he allegedly played in a 2009 plot to bomb New York City subways, the trial itself breaks new ground. It marks the first time the public is hearing in open court about real al-Qaida plots from the people the terrorist group actually dispatched to carry them out.

Medunjanin is a beefy naturalized American of Bosnian descent. In court on Monday, he sat in the middle of a long defense table wearing a business suit and a tie. He has a long, bushy beard, thick glasses and delicate hands. He seemed calm as witness after witness — a veritable who's who of convicted terrorists — testified not just about the plot but also about the mechanics of al-Qaida itself.

The prosecution alleges that Medunjanin and two other men traveled to Pakistan in 2008 in hopes of joining the Taliban. They ran into an al-Qaida recruiter instead who convinced them to go back to the U.S. and launch an attack there. The trio allegedly planned the attacks for September 2009 to coincide with the eighth anniversary of the Sept. 11 attacks.

What made this plot so serious, law enforcement officials say, is that it wasn't just aspirational — it was operational. Medunjanin, former Denver shuttle bus driver Najibullah Zazi, 26, and Zarein Ahmedzay, 27, allegedly had the know-how they needed to build the explosives, put them in backpacks and ignite them on the trains. Zazi and Ahmedzay pleaded guilty to terrorism charges two years ago.

"It's rather ironic that this case has attracted so little attention," says Matthew Waxman, a law professor at Columbia University who used to work on detainee affairs for the Bush administration. "This trial has been an occasion for a convention of terrorism suspects."

The convention of terrorists has included not just Zazi and Ahmedzay, but also two other men who in the years after the Sept. 11 attacks had been accepted into al-Qaida's inner circle: Long Island resident Bryant Neal Vinas, and a British man, Saajid Muhammed Badat, who was convicted in the U.K. in 2005 of plotting to blow up an airplane.

It's rather ironic that this case has attracted so little attention. This trial has been an occasion for a convention of terrorism suspects.

Badat, 33, provided the most striking testimony. He spoke for three hours by videotape Monday. Al-Qaida had chosen him for a mission. He was supposed to be a second shoe bomber, joining fellow Englishman Richard Reid. He was dispatched in 2002. But he ended up not going through with his part of the attack, and was arrested in 2003 for his role in the conspiracy.

While in prison in Britain, he began to rethink his links to al-Qaida and eventually started cooperating with authorities. Scotland Yard has been vague about when that happened exactly, but what the Metropolitan Police will say is that his help has been invaluable in breaking up plots and understanding al-Qaida as an organization.

In testifying at the trial in Brooklyn on Monday, Badat became the first terrorist convicted in the U.K. to present evidence in a U.S. trial. Officials say he is lined up to testify in as many as 18 different terrorism cases, starting with the Brooklyn trial.

Badat wasn't expected to discuss the details of the subway plot. Instead, he shed light on the inner workings of al-Qaida itself — talking about guest houses, media operations and the way reconnaissance and attacks were developed. He was asked by al-Qaida's second in command at the time, Abu Hafs al-Masri, to research possible Jewish targets to attack in South Africa. He trained would-be jihadis in explosives. He went though al-Qaida's intelligence course and helped the group translate propaganda videos into English.

He spent time with the man who is thought to be al-Qaida's highest-ranking American, former Florida resident Adnan Shukrijumah. Badat said he sat down with Osama bin Laden after he was assigned the shoe-bombing mission, and the former al-Qaida leader told him why blowing up a plane was so important.

"He said that the American economy is like a chain," Badat testified. "If you break one link of the chain, the whole economy will be brought down."

Badat's testimony Monday is the terrorist equivalent of what happened in an organized crime trial when a "made" guy in the Cosa Nostra would turn state's evidence.

"We'd get someone who is a card-carrying member of la Cosa Nostra. He would become an expert witness testifying as to what it meant to be a member of la Cosa Nostra, what you went through, swearing to the oath of silence, that sort of thing," says Peter Ahearn, a former FBI special agent in charge. "These guys they are rolling out to testify against al-Qaida are doing the same thing. This was part of their plea deal, to cooperate, and now we're hearing their testimony."

Ahearn speaks from experience. He was in charge of the FBI's Buffalo, N.Y., office during the Lackawanna Six case. That was America's first brush with possible homegrown terrorism. A handful of men from the steel town of Lackawanna left upstate New York and traveled to Afghanistan in the spring of 2001. They trained in an al-Qaida camp and then returned to the U.S. just weeks before the Sept. 11 attacks. Those men also agreed to testify as part of a plea agreement.

"It was their knowledge of the process that they went through in the training camps that set the tone for a trial," Ahearn said.

What makes the Brooklyn trial of Medunjanin particularly unusual, Waxman of Columbia University says, is the sheer number of convicted terrorists who have shown up in court. He says the testimony, and the way the trial is unfolding, is proof that the criminal justice system can handle terrorism cases — and tough cases with classified material don't need to be sent to military commissions at Guantanamo.

"In the past, the idea of prosecuting terrorists here in New York has generated huge outcry," he says. "But this high-profile trial is going on right here."

That outcry was one of the reasons why the Obama administration ended up having to move the biggest terrorism trial — that of the alleged Sept. 11 conspirators — from the Eastern District of New York to Guantanamo.

The arraignment in that case is scheduled for May 5. Badat, the British shoe bomber-turned-witness, said in court Monday that he wants to testify for the prosecution in that case, too. He said one reason he agreed to cooperate in terrorism trials is that he wanted to testify against Khalid Sheikh Mohammed, the alleged mastermind of the attacks. Badat said he had come to believe that al-Qaida generally, and Mohammed in particular, was manipulating Muslims into doing things they shouldn't be doing.