Accessibility links
Through Debt And Derision, Gingrich Keeps Running Republican presidential candidate Newt Gingrich is more than $4 million in debt, but he keeps campaigning, despite having no chance of seizing the GOP nomination from Mitt Romney. Some critics say Gingrich's dogged refusal to leave the race could seriously damage his political brand. 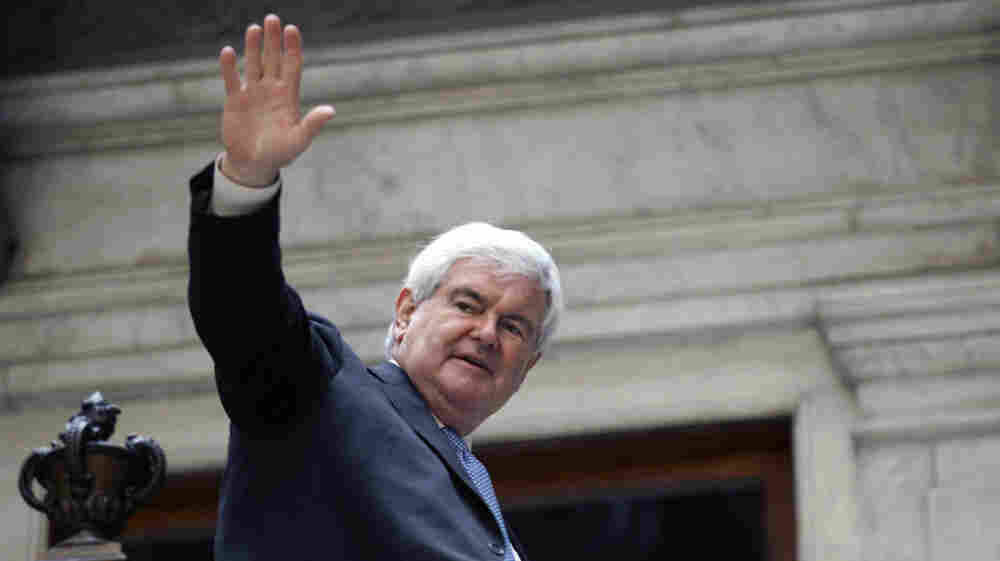 Former Massachusetts Gov. Mitt Romney is expected to win all five of the Republican presidential primaries being held Tuesday. The GOP front-runner hasn't had to worry about real competition since Rick Santorum dropped out of the race earlier this month.

But former House Speaker Newt Gingrich is still running for president, even though he's short on money and lagging far back in the polls.

And he's not getting much media coverage either, except for bad news. One of his biggest recent headlines came when a penguin bit his finger during a stop at the St. Louis Zoo.

The crowd was a little friendlier at a New York State Republican Party dinner in Manhattan last week, although the scene was kind of awkward.

"I'd like to introduce our first speaker, a man who's played a major role in our presidential selection process," said New York GOP Chairman Ed Cox, choosing his words carefully as he brought Gingrich to the stage.

Cox had already endorsed Romney for president. Gingrich played to the crowd of party insiders.

"I don't want any of you to be confused about this, and I don't want the media to be confused. I've stayed in the race to articulate big themes and big issues," said Gingrich, who did not criticize Romney or ask for any votes.

And he added that he'll campaign for Romney if he's the nominee.

"The fact is, we are dedicated to a unified Republican Party winning the presidency on behalf of America's future," said Gingrich, who with that line drew his most sustained applause of the night.

At a rally in Buffalo, N.Y., though, Gingrich had a different message.

"Gov. Romney's ahead, but he is only about halfway to the number [of delegates] he needs for the nomination. He can raise a lot more money than I can, but I think we have a lot more people than he has," said Gingrich.

It's not clear which people Gingrich is talking about, given that the former speaker has only won two primaries.

Gingrich's host in Buffalo was Carl Paladino, the unvarnished Tea Party-backed candidate for New York governor two years ago. He won the Republican nomination before losing to Democrat Andrew Cuomo by a nearly 2-to-1 margin.

Paladino admits Gingrich's chances at the nomination are slim to none, but he wants to help Gingrich stand up to the party powers.

"Nationally, the old [establishment] — the big money people, OK — are driving us to Romney, and I think it's a big mistake," said Paladino.

Gingrich is the no-money candidate at this point.

At the end of February, Gingrich reported about as much in debt as he had in cash on hand. A month later, those debts had ballooned to $4.3 million with about $1.2 million in the bank. Gingrich acknowledges his money troubles — to a point.

"We're doing what any business does when it runs into a shortfall. We've cut expenses, we've begun paying off debt, and we're working our way back to balance. But I would also say as the only speaker of the House in your lifetime to balance the budget for four straight years, I think my record on balancing the public budget is pretty unchallengeable," said Gingrich.

There is a still a pro-Gingrich campaign with money — the superPAC backing him. Winning Our Future got another $5 million last month from the wife of casino magnate Sheldon Adelson. Together, the couple has contributed $20 million.

The superPAC's senior adviser, Rick Tyler, is a longtime Gingrich associate. He doesn't say how Winning Our Future will spend its remaining funds, but he said the group will keep pressing the Romney campaign from the right.

"I think they would like nothing more than to quickly hit the reset button, shake up the Etch A Sketch and start to move toward the center," said Tyler.

Tyler doesn't think Romney can win without energy from the party's activist base.

"We do not want him to move to the center. We want him to represent the conservative values of a conservative party, and I think the majority of Republicans would agree with that," said Tyler.

Calls To Quit The Race

It's Gingrich, though, who some conservatives are losing patience with.

Last week, a group called the Taxpayers Protection Alliance called for Gingrich to surrender his publicly funded Secret Service protection. The Secret Service wouldn't tell NPR how much protection costs. But the agency's director told Congress in 2008 that it costs on average about $38,000 a day to protect a presidential candidate.

"It's becoming obvious to everybody that this campaign is winding down. He's talked about being a fiscal conservative in the past. So now is the time for him to, I guess, put his mouth where our money is and stop the Secret Service protection," said Williams.

That came a week after Gingrich traded shots with Fox News, where he was a paid contributor before the campaign.

After Gingrich claimed CNN had been "less biased" in its coverage, Fox News chief Roger Ailes reportedly told a group of journalism students that Gingrich was just trying to get in good with the network because he knew he wasn't coming back to Fox.

This isn't the first time Gingrich has found himself alienated from former allies.

"There's always been this tension in Newt Gingrich between the bomb-throwing outsider and the calculating insider," said historian Steven Gillon, who is the author of The Pact: Bill Clinton, Newt Gingrich, and the Rivalry that Defined a Generation, a book about Gingrich's time in the House.

He said all this is a lot like the months before Gingrich resigned as speaker in 1998.

And in contrast to former Pennsylvania Sen. Rick Santorum, who got out of the race this month with his enhanced reputation intact, Gillon said Gingrich may be damaging his political brand.

"It's his future clients, and his ability to make money and to stay relevant and stay connected and to be someone who can still get speaker's fees — and I think that's what's being threatened if he stays in the race," said Gillon.

Gingrich told NBC News on Monday that he'd take a "deep look" at his campaign after the votes are counted in Tuesday's primaries.

But he might not have much to fall back on. Many of his old projects have floundered during the campaign. One of them, the Center for Health Transformation, a health policy think tank Gingrich founded, filed for bankruptcy earlier this month.