Accessibility links
'America's Great Debate' Saved Union From War The Civil War remains the bloodiest conflict in U.S. history and the defining crisis of the nation. But it might easily have started 12 years earlier. Fergus Bordewich tells the story of the compromise that staved off civil war, and also made it inevitable, in his book, America's Great Debate. 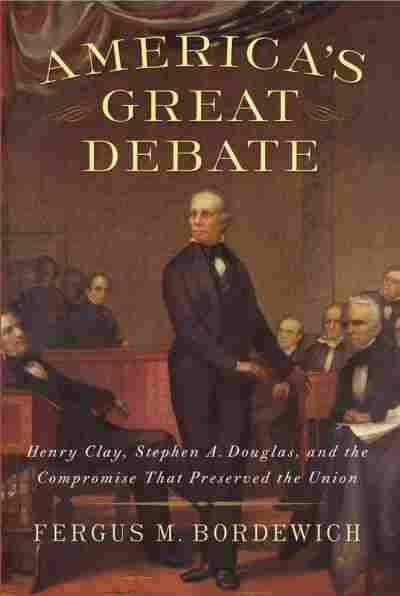 Henry Clay, Stephen A. Douglas, and The Compromise That Preserved the Union

The Civil War remains the bloodiest conflict in U.S. history and the defining crisis of the nation. But it might easily have started 12 years earlier.

In 1850, California's application to join the Union threatened to unhinge the delicate balance of pro- and anti-slavery forces. The flood of European immigration had shifted power in the House of Representatives decisively to the North. Another free state would tilt the U.S. Senate.

The issue went beyond California to the status of all the other territories conquered in the war with Mexico and to the shape of a nation many believed would inevitably absorb Canada, the Caribbean and maybe Central America, as well. It forced the country to confront the central issue — slavery.

In a new book, America's Great Debate: Henry Clay, Stephen A. Douglas and the Compromise That Preserved the Union, Fergus Bordewich examines the longest debate in the history of the U.S. Senate and how bitter partisans reached across the divide to craft a compromise that both staved off a civil war and made one inevitable.

"In 1850," Bordewich tells NPR's Neal Conan, "the North wasn't ready to fight a civil war." By and large, Northerners "didn't even believe that secession was going to occur." But Southerners, he says, "not all but a great many, had already mentally and I feel like even spiritually seceded from the United States. They were ready to go." And had Southerners gotten what they were looking for in 1850, "the North would have lost the Civil War."

On what the country would have looked like, had secession occurred in 1850

"It seemed obvious to the people of 1850 that if secession took place in one part of the country, it was probably going to be replicated by precedent in other parts of the country, and that most likely California, rich with gold, would go its own way along with the rest of the West Coast, Oregon and what later became Washington, very viable as an independent country.

"These were the great aging lions of the Senate, all of them very old, at the outer end of their life spans. And all of them would soon be dead. ...

"Calhoun drops dead right in the middle of the debate, not on the floor of the Senate but during the debate. Here's Calhoun, the fierce, enraged voice of the slave-holding South, defends slavery at any cost, secession before relinquishing a slave. A bit of an odd man out initially.

"Clay, the great compromiser from Kentucky, a slave owner himself but absolutely against the extension of slavery to the West. And he's the man who's called on to somehow find a path out of this wilderness of anger and suspicion and warmongering.

"And Daniel Webster, severely alcoholic by this point, sometimes barely steady on his feet, sonorous, spectacular orator, throws his weight behind Clay and compromise. One of the great acts of political courage in American history in that he committed political suicide by doing that. ... He'd been a great voice of anti-slavery for decades, and he threw that great sonorous voice behind the Fugitive Slave Law.

"So you have Clay and Webster aligned, working together toward compromise, Calhoun somewhat on the outside but with a whole new contingent of young, angry pro-slavery men led by Jefferson Davis primarily coming up after him."

On why the Compromise of 1850 matters, even though the Civil War eventually happened

"The most important thing about the Compromise of 1850 was that it prevented war in 1850. The country was on the brink of war. It was much closer to a shooting war than I think most people realize today, although it was quite manifest to Americans South and North in 1850. Had those first shots been fired, it wouldn't have been in Charleston Harbor. Those shots were going to be fired in Santa Fe, New Mexico.

"Why is that? Because Texas was organizing an army to march on the New Mexico Territory, to incorporate it into Texas as part of an ambitious plan to carry slavery further Westward, eventually to the Pacific Ocean. This was not far-fetched to the people of the time.

"Zachary Taylor, one of the most interesting, mostly forgotten presidents in American history, war hero of the Mexican War, a tough, tough man, a slave-owner but dead against the extension of slavery, said publicly that he would lead an army himself to New Mexico to fend off the Texans if it came to that.

"War was about to happen, and, yes, the compromise unraveled, but basically it bought a decade for the rest of the country. It took the North another 10 years to become ready to fight a war that it eventually won."