Accessibility links
Negotiating The College Funding Labyrinth Paying for college is kind of like solving a mystery. What do four years of college really cost? Are your loans government or private? And when you graduate, how much will you really owe? Many students and parents don't have a clue. 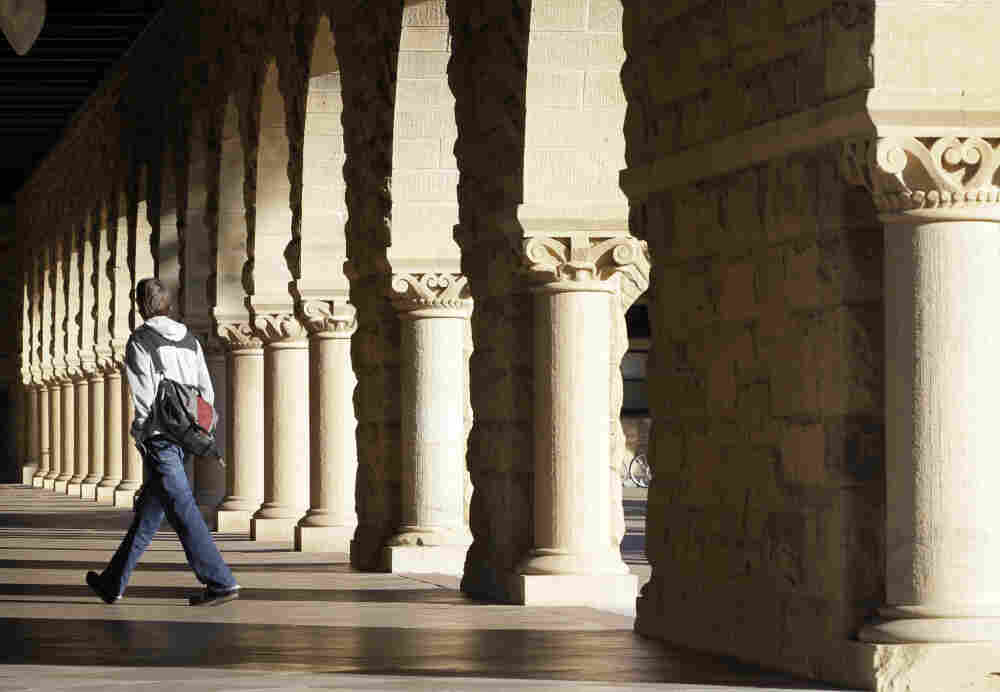 About 7 out of 10 students borrow money to pay for college. Here, a Stanford University student walks through the campus in Palo Alto, Calif. Paul Sakuma/AP hide caption

Now that your child has gotten into college, have you figured out how much it's actually going to cost — and who's going to pay for it?

These questions are hitting college-bound students and their parents right about now, along with the other million questions that nobody seems to have straight answers for. Paying for college can be complicated, if not mind-boggling.

Roughly 7 out of 10 students borrow money to pay for college, and for many, the process might as well be a mystery wrapped in a riddle.

Tom McWilliams, a psychology and computer science major at George Washington University, is paying about $60,000 a year for tuition, room and board.

Percentages of outstanding loans by type of degree.

Graduate students more than $20,000 in debt, by degree type.

That's unlikely, because the most you can borrow from Uncle Sam is $10,000 a year, which means he's probably borrowing from a private lender and doesn't know it or can't tell the difference. In fact, McWilliams isn't entirely sure what types of loans he's taken out — federal, private, subsidized, unsubsidized.

"Actually, I don't remember," he laughs. McWilliams seems to take some strange pleasure, though, in knowing he's not alone.

"This is an expensive school, so a lot of people have debt here," he says. "They don't look too deeply into [the cost or debt], they just take the money."

That's the problem. When students get into college, they often don't know how much they're paying or where exactly the money is coming from. They're in the dark.

What do institutions do about this? Well, that's where it gets a little strange. The world of higher education is a sort of twilight zone where institutions can choose to explain or not explain their real price versus their sticker price, or disclose all the combinations of government and institutional loans, scholarships and grants that students can receive to pay for it.

"There's been a lack of transparency from universities about what the cost of the university is, so we're trying to get some clarity there."

Borrowing for college, after all, is akin to taking out a mortgage on a house these days. And we all know how that's turned out. You're lending money to lots of people with little or no credit, and no clue about what they've gotten themselves into.

"I didn't realize how much debt I had until I graduated," says Sarah Bickens, a teacher from New York visiting the nation's capital. She remembers all too well the fear that came over her.

"So there's this horrifying moment at the end of your senior year in college when they put everyone in an auditorium, and they give you the piece of paper that says how much money you owe," Bickens says. "There's this collective gasp."

Collective gasp is right. When you add up the total student loan debt out there, it takes your breath away.

"Just over $1 trillion; it's higher than all consumer loan debt combined," says Roger Michaud with the College Savings Foundation. He says growing debt and the student loan default rate are worrisome.

Sure, it all sounds scary, he says: the price of college going up every year; the rising student loan debt; the default rate. But he credits the Obama administration for at least trying to lift the burden on college graduates by capping their monthly payments at 10 percent of discretionary income. And if they've paid their loans on time but 20 years down the road they still owe money, the government will forgive the balance.

"Is it a giveaway? Yeah, forgiving a student loan is a giveaway," Michaud says.

The question, he says, is will it be worth it? Or will it come back to haunt us?

From Silicon Valley, A New Approach To Education April 18, 2012
For-Profit Schools Under Fire For Targeting Veterans April 9, 2012
Making Headlines Since The '70s: Is College Worth It? June 18, 2011