Accessibility links
VA Struggles To Provide Vets With Mental Health Care The Department of Veterans Affairs says any veteran who seeks mental health services gets help within days. But a new investigation by the agency's inspector general says the statistics are skewed to make wait times appear shorter. The VA will have a chance at a Senate hearing Wednesday to explain how it's going to do better. 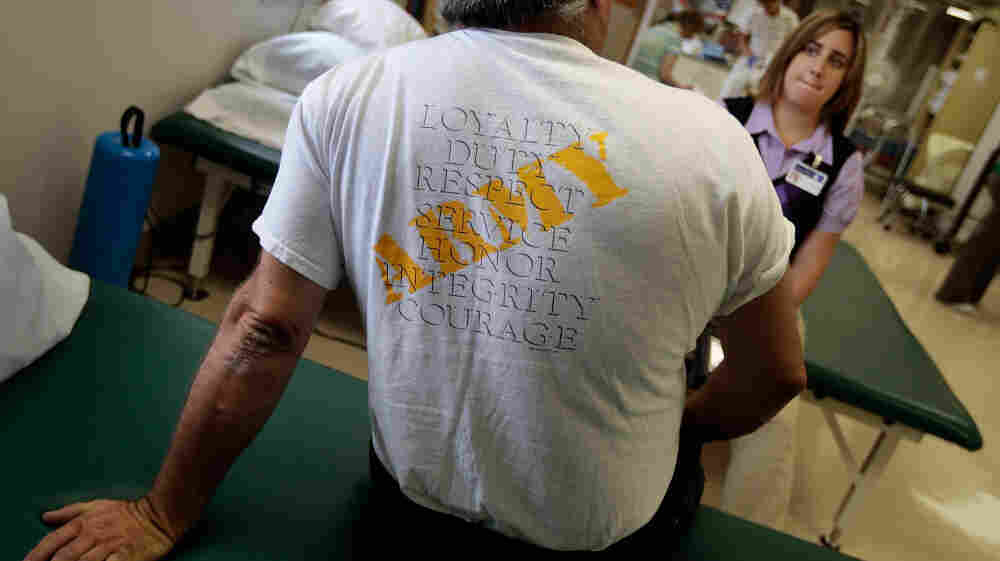 A veteran of the Iraq War with post-traumatic stress disorder talks to physical therapist Nicole Bormann before a session in the VA Medical Center in St. Louis. Chris Hondros/Getty Images hide caption

Over the past five years, the Department of Veterans Affairs says, the number of former service members seeking mental health services has climbed by a third. In response, the agency has boosted funding and tightened standards.

Now, any vet asking for help is supposed to be evaluated within 24 hours and start treatment within two weeks. The VA has claimed that happens in the vast majority of cases, but a new investigation by the agency's inspector general says the VA statistics are skewed to make wait times appear shorter.

You don't see the real cost in human terms until 20 to 30 years after the conflict has ended.

Paul Rieckhoff of the Iraq and Afghanistan Veterans of America says that is not surprising.

"It illustrates, in incredible clarity, how dysfunctional the VA system is right now for thousands of veterans around the country," he says.

The inspector general's report says, rather than starting the clock from the moment a vet asks for mental health care, the VA has been counting from whenever the first appointment became available. That could add weeks or months to the wait time.

So while the VA has been saying 95 percent of vets were seen as quickly as they were supposed to be, nearly 100,000 patients had to wait much longer. At the VA Medical Center in Salisbury, N.C., for example, the average wait was three months. Patrick Bellon, an activist with Veterans for Common Sense, says the government has been too slow to increase mental health services.

"You don't see the real cost in human terms until 20 to 30 years after the conflict has ended," Bellon says. "Only recently have we seen an attempt to increase resources to deal with that cost."

Veterans for Common Sense is suing the VA over delays in treatment, and over the time it takes some vets to get benefit payments. The VA announced plans to hire nearly 2,000 additional mental health staff last week, just days before this report came out.

Bellon says he believes that should help.

"I firmly believe the issue is supply, so I'm hoping that if [we] increase the supply, fewer veterans will be turned away," he says.

But there are those who question whether more staff alone will solve the problem. Retired Gen. Peter Chiarelli, former vice chief of staff of the Army, says the supply of good clinicians is not growing fast enough.

Chiarelli also thinks understanding of post-traumatic stress and traumatic brain injuries needs to improve, before the military can deal with the more than 1 million veterans who sought help last year.

Attorney Dan Brier is suing the VA on behalf of Stanley Laskowski, an Iraq vet diagnosed with PTSD in 2007. Brier says that even though his client was diagnosed and was in the VA system, he never got the help he needed.

"Since he never received any psychotherapy as the VA protocols require, I'm afraid that in Mr. Laskowski's case, it was an issue of appropriate resources not being available," Brier says.

Laskowski ended up abusing drugs, getting arrested and losing his job; he's seeking millions in compensation from the VA.

The Department of Veterans Affairs declined to comment for this story, but the VA released a statement saying it endorses the inspector general's findings. The agency agrees it needs to change the way it counts wait times, and that it also needs to improve staffing.

The report notes that the inspector general pointed out similar problems seven years ago. At a Senate hearing Wednesday, the VA will have another chance to explain how it's going to do better.