Accessibility links
After Riots, Scandal Sparked Reform In LAPD It's been 20 years since Los Angeles erupted in riots after the acquittal of four white police officers in the beating of black motorist Rodney King. The city has seen a lot of changes since then, but the police department has undergone an outright transformation. 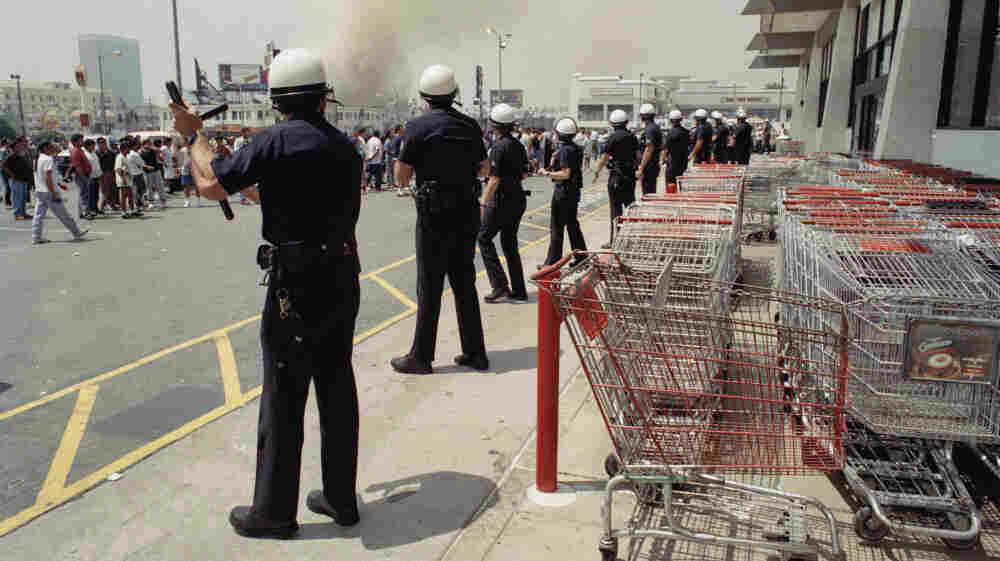 Los Angeles police form a line to keep a crowd from entering a building on April 30, 1992. Twenty years after the L.A. riots, most civil rights and community groups give the LAPD high marks for progress. Nick Ut/AP hide caption 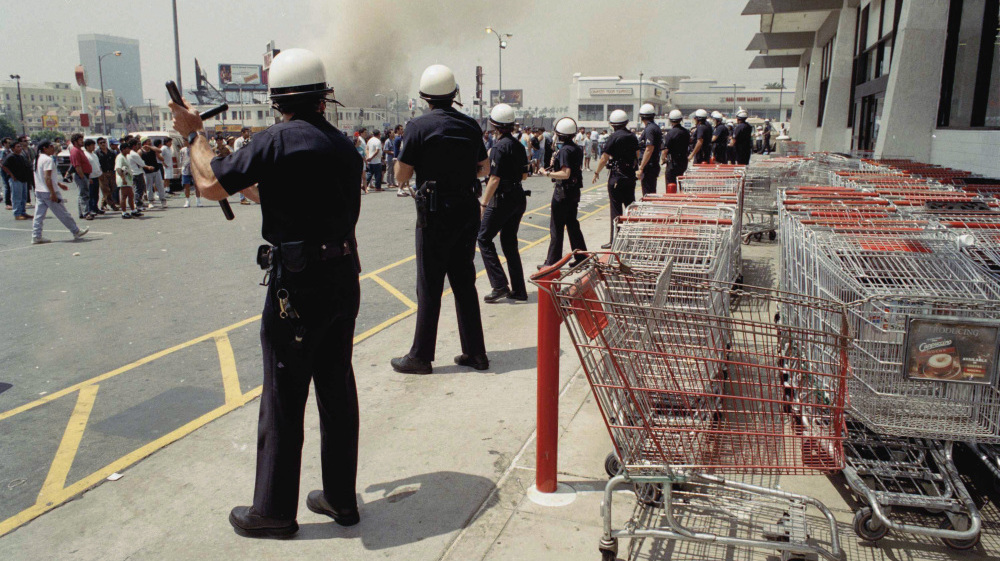 Los Angeles police form a line to keep a crowd from entering a building on April 30, 1992. Twenty years after the L.A. riots, most civil rights and community groups give the LAPD high marks for progress.

It's been 20 years since Los Angeles erupted in riots following the acquittal of four white police officers in the beating of black motorist Rodney King. There have been many changes in the city since those days of fire, looting and public discord, but perhaps the biggest changes can be seen in L.A.'s police department.

On a drive around the heart of South Central L.A., there are still plenty of weed-filled lots where businesses that burned down in the riots used to stand. There's also still a lot of crime. 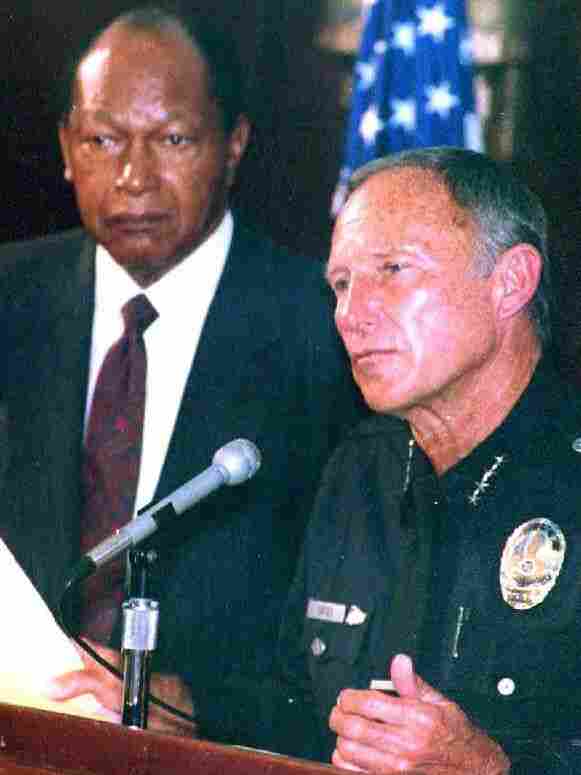 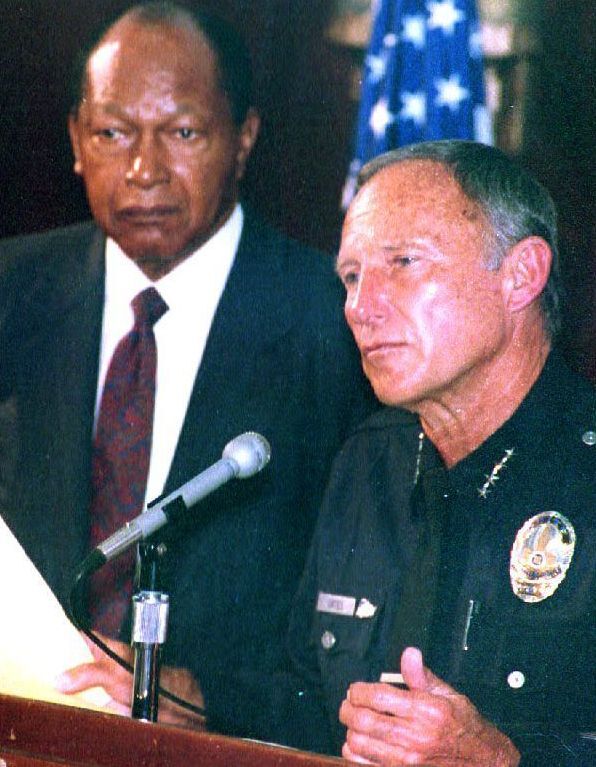 LAPD Chief Daryl Gates (right) and Los Angeles Mayor Tom Bradley respond to the rioting that began on April 30, 1992, after four police officers were acquitted in the beating of Rodney King.

Commander Dennis Kato is out patrolling around his 77th Street police station when he drives by three young men standing up against a liquor store's wall in handcuffs.

"We had a shooting over the weekend, that's why the officers have been down here more," Kato says. "We had three people shot there on Sunday."

Despite the daytime arrest, crime is nowhere near the levels it was back in 1992, when the riots hit. That year, 143 people were murdered within the 77th Street station's 12-square-mile area. Back then, Kato was a patrol cop who had been on the beat five years.

"Tension between police and the community, from my point of view being a young officer here, was really contentious," Kato says. "I mean, you could feel it. You could almost cut it with a knife."

Everyone was stopped and talked to; every car that could be impounded was impounded; and every possible ticket was written.

"There was a time when if you run from us, then we're going to deal with you when we catch you," says Gary Verge, who also worked the 77th Street area. Verge had only been on the beat for a year when the riots broke out.

"Back then, we just reacted to things. We went after everybody ... but we did it in an aggressive fashion," Verge says. "That was the old school. That was the end of the Daryl Gates era."

Gates was the controversial LAPD chief at the time of the riots. His style embodied the force's tough policing — confrontational and unapologetic. Even as the city burned, Gates refused to criticize the cops who beat King or the verdict that acquitted them.

"I think we need to accept the fact that the verdict came in, and if we are a nation of laws we will accept that and go from there," he said at the time.

But no one was accepting the verdict or the LAPD. For the next five days, the fires burned on. More than 50 people died, and rioters caused about $1 billion in property damage.

Meanwhile, the LAPD was slow to respond. Kato remembers watching other police forces patrol his division; then he watched the National Guard move in. He says it was an embarrassment — it felt as though they had failed as police officers.

With the community in ashes and the police demoralized, changes were promised. Gates was forced out and a new chief was hired, then another. But civil rights lawyer Connie Rice says real changes to the LAPD's culture didn't begin until years later. She says the department first had to hit bottom, and that happened in 1998 with a scandal at the department's central Rampart Division.

If King was an 8 on the Richter scale, Rice says, Rampart was a 10: Dozens of LAPD officers were accused of corruption, drug dealing and other crimes. Federal authorities came in and a consent decree was imposed. Rice says the scandal forced a substantive change in leadership. 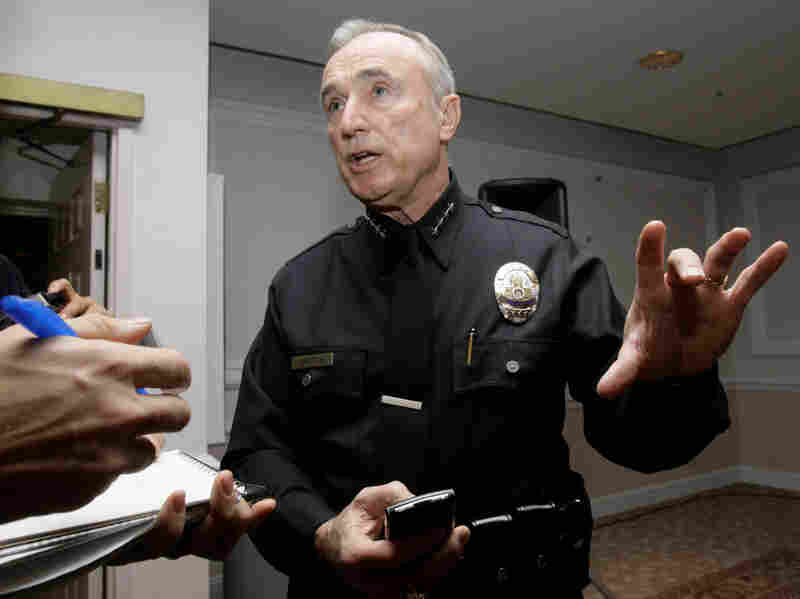 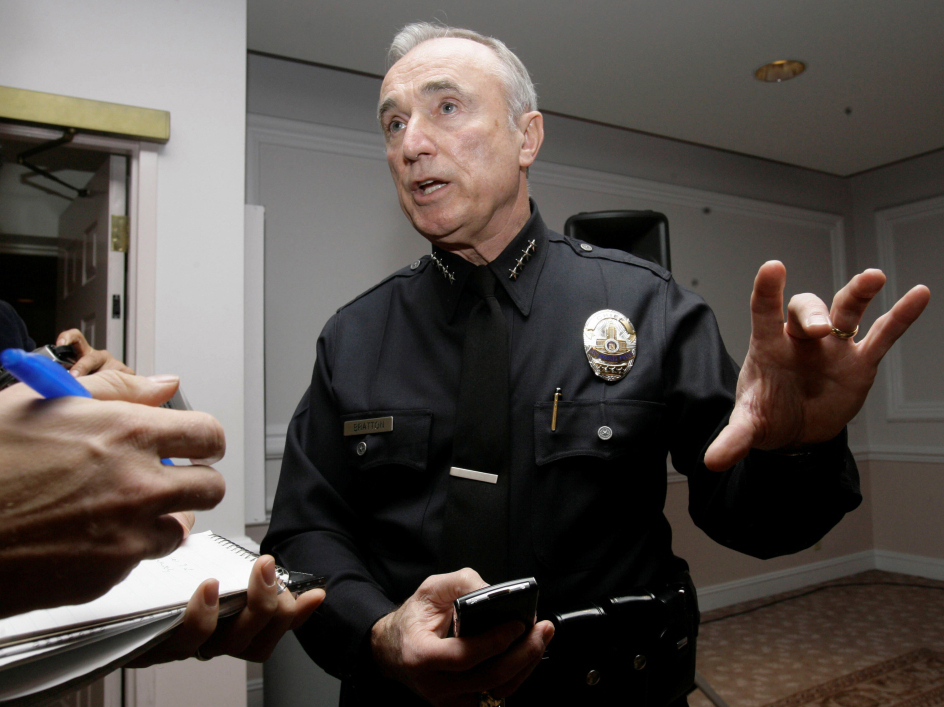 Former LAPD Chief William Bratton is credited with setting the first substantive department reforms in motion during his seven-year tenure.

"It cleared the deck," she says. "It cleared the way to bring in a transformative chief who would use the consent decree to finally, finally force [the] LAPD to police constitutionally."

That chief was William Bratton. After being appointed in 2002, Bratton joined with a strong civilian police commission and the city's mayor to set reforms in motion.

The past decade has seen its share of conflicts and challenges, but today most civil rights and community groups give the LAPD high marks for progress. Residents also approve of the department, though its popularity has slipped over the past 15 years according to polling by Loyola Marymount University.

Clarence Heard, a local minister in South L.A., says the LAPD is definitely a different department than it was 20 years ago.

"I'm not particularly fond of the police," Heard says, "but, to be honest with you, I think L.A. is much better since the feds took over the LAPD. You know, I think they work harder at trying to defuse a situation as opposed to escalating a situation."

Back at the 77th Street police station, Verge says he wouldn't want to go back to the days of the riots, but he doesn't regret being a cop back then.

"We got to witness the change," Verge says. "We got to come in at the end, see how they used to do it and then we got to be a part of the solution."

Verge is now the 77th's senior community relations officer, a position that didn't exist in April 1992.