Accessibility links
U.N. Monitors Fail To Halt Violence In Syria In some parts of Syria, the fledgling U.N. monitoring mission is bringing calm. In others, the violence is getting worse. When monitors left a district in the central city of Hama, government troops pummeled the area with tanks and artillery, and snipers shot residents dead, according to activists. 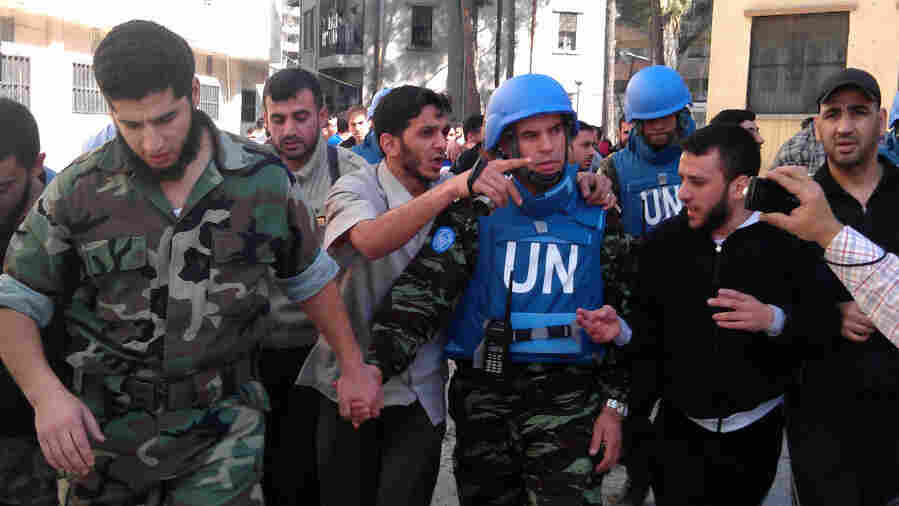 Members of the Syrian opposition walk with a U.N. observer during a visit by monitors to the restive city of Homs, Syria, on April 21. Opposition activists say observers appear to help bring calm if they stay in an area. Two monitors have been deployed in Homs for the past several days. Khaled Tallawy/UPI/Landov hide caption

Yet hundreds of people have died in recent days, according to activists. And in some areas, visits by U.N. observers have been followed by intense violence.

A Syrian rebel fighter who goes by the name Abu Mazen

Only about a dozen U.N. observers have reached Syria. Wearing their signature U.N.-blue berets or helmets, their goal is to see whether government troops and rebels are sticking to the cease-fire, which went into effect April 12.

In some places, like the flashpoint city of Homs, the mere presence of monitors does seem to be stemming the violence.

But in other locations, like the central city of Hama, it's not so simple.

Videos taken by Hama residents and posted on the Internet show people holding olive branches, crowding around the U.N. monitors' vans, begging for help with detained relatives or destroyed homes.

"Bashar al-Assad kills us," one man says, referring to the Syrian president. "We want freedom."

In another video, you see a soldier standing on a roof in Hama, swiping his hand across his chin in a common Syrian gesture. "Just wait till later," he is saying with his hands. "You'll see."

After the monitors left, people began protesting against the Syrian regime. Activists say snipers posted on rooftops — like the one in the video — opened fire — a fairly common occurrence these days in Syria. To go out and protest is to risk being injured or killed. 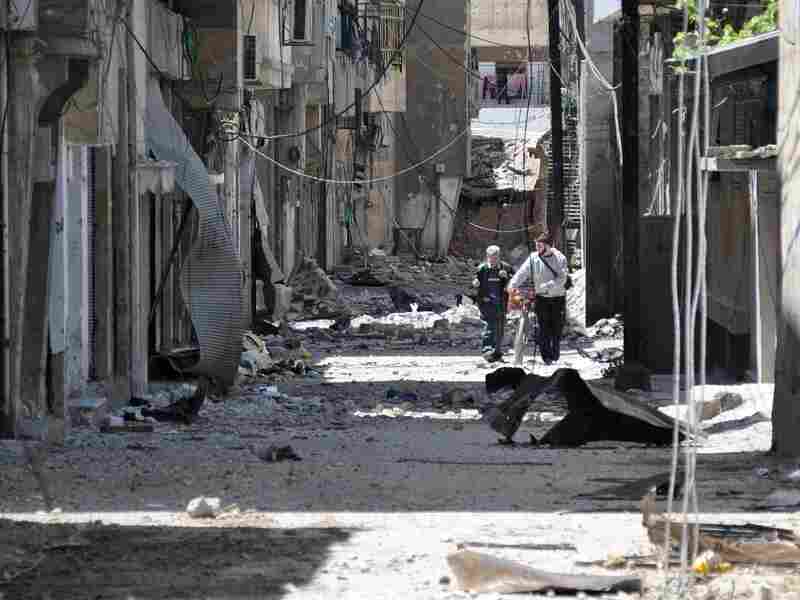 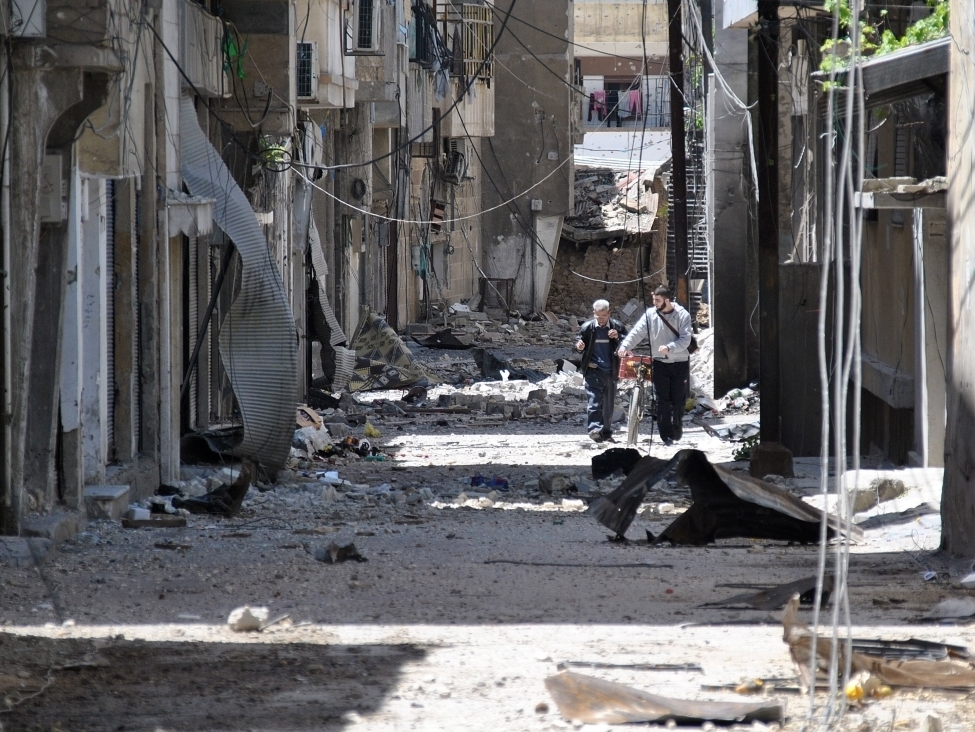 Syrians walk in an alley damaged by Syrian army shelling in the Bab Sbaa neighborhood in Homs province, central Syria, on April 21.

The next morning, conditions grew worse. Another video shows tank shells reducing parts of houses to rubble. While Hama has been shelled intermittently during the past year, residents say it has never been this bad. Houses started crumbling and people were killed, according to residents.

The Rebels Strike Back

And then the situation grew more complicated.

Rebels known as the Free Syrian Army began fighting back. If the government won't keep up its end of the cease-fire, says a rebel fighter from Hama who goes by the name Abu Mazen, then they won't either.

Abu Mazen says the rebels in Hama decided to fight back by shooting and killing a colonel who was leading the offensive. Other reports say his driver was also killed.

After that, the army assault intensified. The shelling increased and snipers reportedly shot anyone who tried to leave the area.

Activists say bodies had to be buried in a garden because no one could leave the area. In all, at least 30 people were killed in the city, they say.

One activist, who goes by the name Manhal, says while civilians were targeted in retaliation for the killing of the colonel, they were targeted before that for speaking to U.N. observers. He says he has the names of at least six people who spoke to observers and were later killed by Syrian troops.

U.N. and U.S. officials say they are disturbed by the news of what happened in Hama.

"It is absolutely deplorable, if there is this kind of intimidation, harassment and possible violence against those Syrians who have every right to meet with and discuss the monitors," said U.S. Secretary of State Hillary Clinton.

"That's what the monitors are there for."

Later, the U.N. observers returned to Hama. Many people were afraid to talk to them. Others covered their faces. They showed the monitors destroyed homes and a makeshift graveyard where the dead had to be buried.

Sean Carberry contributed to this report.