Accessibility links
Wounded Warriors Face New Enemy: Overmedication The Pentagon set up special battalions to help returning troops recover from their battlefield wounds. But some of those soldiers have been given excessive amounts of prescription drugs, which are causing additional problems. 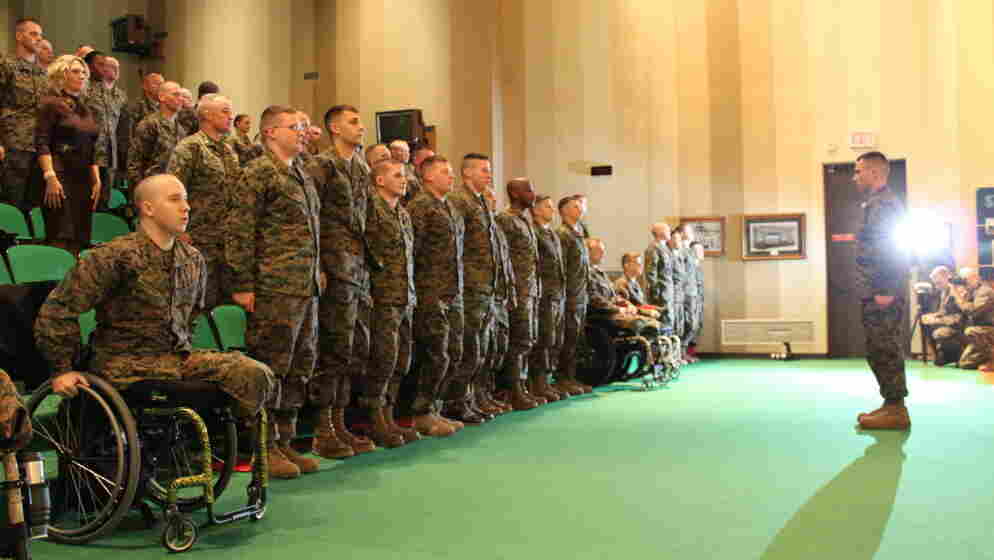 Wounded Warrior Battalions have been set up to help troops returning from combat recover from their injuries. But recent Pentagon reviews have found a pattern of overmedication in such battalions. Here, Marines assigned to Wounded Warrior Battalion East at Walter Reed National Military Medical Center in Bethesda, Md., graduate from a training course in January. Capt. Jill L. Wolf hide caption

Thousands of sick or seriously wounded troops who return to the U.S. from combat duty are assigned to special units called Wounded Warrior Battalions.

The more than three dozen such battalions are at bases across the country, and they aim to give soldiers and Marines the months they need to recover from their battlefield wounds.

But now, the Pentagon inspector general's review into how these Wounded Warrior Battalions are working has uncovered a serious problem: excessive use of prescription drugs.

It's a problem David Pennington is familiar with. As a Marine sergeant, Pennington served two tours in Iraq and received a traumatic brain injury when his vehicle hit a roadside bomb. Later, he suffered from post-traumatic stress.

In 2009, Pennington was assigned to the Wounded Warrior Battalion at Camp Lejeune in North Carolina. Then, after he was prescribed two anti-anxiety medications, something happened to him.

"They noticed that I was acting, I guess, strange, and I was just kind of out of it," Pennington recalls.

He spent a week coming off the medications before his doctors told him that he should not have been taking them both. That's because they were the same medication.

"You wouldn't need to take both of those at the same time," the doctors told him.

A Pattern Of Overmedication

Pennington's story is not unusual. In a report released at the end of March, Pentagon investigators describe patterns of overmedication and of Marines addicted to pain medications at Camp Lejeune's Wounded Warrior Battalion.

Rep. Walter Jones, a Republican from North Carolina and a member of the Armed Services Committee, pushed for the Pentagon investigation, after talking to Marines like Pennington.

"We've got a serious problem, and we need to find out how we can deal with this problem," Jones says. "These young men and women ... are dependent on this medication. We need more oversight within the military, in my opinion."

Camp Lejeune isn't the only place where investigators found problems with overmedication. An inspector general report completed last fall noted similar problems at the Army base at Fort Drum in New York.

One Fort Drum staff member told investigators that "the numbers and types of medications that some of the warriors were taking was a scary situation." Another said that "half of the Warriors are stoned on psychotropic drugs."

Stephen Xenakis, a psychiatrist and a retired Army brigadier general, says this has been an issue for several years. He says the Army looked into the problem, offered guidelines for doctors prescribing multiple drugs, and also suggested alternative treatments.

"They had noticed that a number of the soldiers who had been treated for pain because of their injuries were on multiple medications," Xenakis says. "And there were problems; they were having overdoses."

The Army doesn't dispute that a problem exists. Now, it may have finally found a solution — at another Wounded Warrior Battalion, at Fort Sam Houston in Texas.

There, the staff came up with a way to avoid overmedication. Based on a computerized patient database, an automated, monthly report alerts doctors to patients considered high risk, such as those who are on multiple medications, have mental health problems or broken relationships, or suffer from chronic pain.

The Pentagon investigator's report said the system improves oversight. Doctors have more information so they can be alert to drug interactions and other problems.

Jones, the North Carolina congressman, says it would make sense for the three dozen other Wounded Warrior Battalions to try that approach.

"If something's working at a certain base, let's try it at other bases," he says.

That's happening now. The Army says three of its other Wounded Warrior Battalions have begun using the reporting system to guard against overmedication. Other battalions could follow in the coming months.

That's not happening with the Marines. The Navy's Bureau of Medicine, which oversees Marine Corps medical care, has not approved that oversight program. Officials say it's still caught up in the bureaucracy. Jones says he'll ask the Navy to tell him why.

As for Pennington, the Marine who had trouble with overmedication?

"I've minimized the amount of medications I take," he says. "And I'm doing a lot better than I was."

Now, Pennington is out of the Marines, he's taken college courses, and he's under the care of a civilian doctor.

Next up in the review process: Joint Base Lewis-McChord in Washington, Fort Riley in Kansas and Camp Pendleton in California.