Accessibility links
American Whiz Rises Up In The World Of Ping-Pong China has long dominated the sport of table tennis, winning almost every Olympic medal since 1992. That's not likely to change at this year's Summer Olympics, but one young American athlete may be on her way to giving China a run for its money. 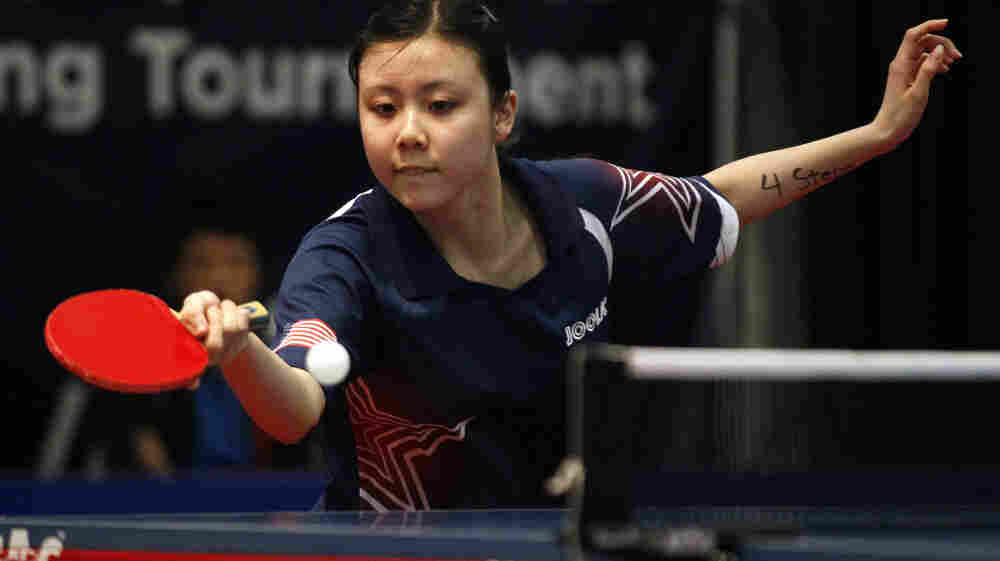 The United States has never won an Olympic medal in table tennis. China has long dominated the sport, winning almost every medal since 1992. That's not likely to change at this year's Summer Olympics in London, but a group of young American women may be on their way to competing at the sport's highest levels.

Ariel Hsing, 16, already has the attributes of a fine table tennis player — quick hands, perfect balance and strong lungs. While she plays, she'll often shout "Sa!" — a meaningless word — to help relieve stress, something she's been dealing with a lot lately.

"A few weeks ago, I was like, 'Oh my gosh, this is the most important thing ever,' " she says. "I have to make it because if I make it, not only will I be able to go to the Olympics, but it will help so much later in life, too, whether it's college applications or maybe even job applications."

Hsing got interested in the table tennis at the age of 7 while watching her parents play at the local recreation center. Her mother was a former table tennis player in China, and her father, Michael Hsing, is a software engineer who also emigrated from there.

"One of our philosophies is we care about the process and not the result," her father says.

'Friends Off The Court'

Hsing normally starts a tournament out slowly, and the Olympic trials in Cary, N.C., are no exception. It's a unique format, with Americans competing against Canadians in a series of mini-tournaments for four spots in the Olympics. But Hsing will also be competing against her friend and fellow California teenager Erica Wu in the semifinal. It's something she says she's used to.

"We're friends off the court," she says. "During the match obviously you pretend like you're playing an enemy, almost, and you have to just play your hardest. But of course once the match ends, then you're friends again."

A Ticket To London

After beating Wu and advancing to the final, Hsing finds herself one win away from going to the Olympics. Her opponent is a woman old enough to be her mother. Chris Xu is the top Canadian qualifier who, before she emigrated, won a Chinese national championship.

The match doesn't start well for Hsing. Watching from the bleachers, Hsing's mother closes her eyes before each point starts. Her father looks like he's in physical pain. But then a few points go her way and Hsing's confidence is back. She guts out a win to tie it up at two games each. Soon, she's at match point and the game is hers.

After shaking hands with her opponent, Hsing runs to her parents, who have burst into tears.

"Didn't I tell you you were going to do it?" her father says.

"I've been dreaming about it," Hsing says. "I've been wishing for it. But when I actually won, it kind of hit me unexpected. So it's pretty amazing, I guess, right now. I've never felt like this before."

Later, Hsing looks relieved as she cheers her American teammates on in their matches. Three of them will come with her to London. There, the pressure will lift just a bit. Hsing is ranked 125th in the world and has very little chance to medal. But that doesn't mean she can relax. Next month, she's facing another kind of challenge — the SAT.