Accessibility links
In Southern China, A Thriving African Neighborhood Some 10,000 African immigrants, many of them traders, have taken over a neighborhood in southern China. It's a hard life, but it reflects the dramatic increase in commerce between Africa and China. 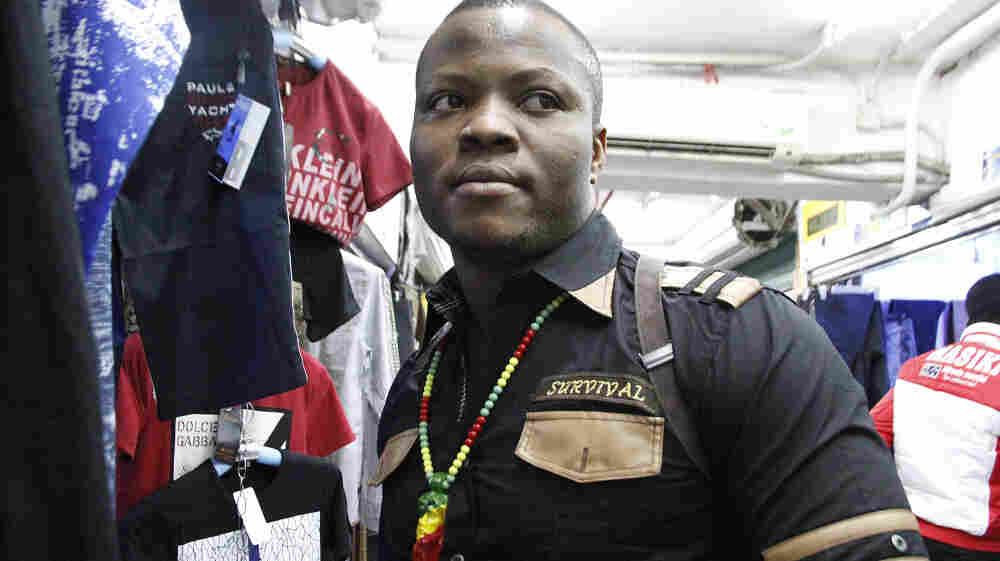 In the southern Chinese city of Guangzhou, thousands of African immigrants, many of them small-scale clothing traders from Nigeria, have come seeking business opportunities. One of the Nigerian traders, who goes by his "designer name" of Niceguy, is shown here in the city's Little Africa neighborhood. Nina Porzucki for NPR hide caption

China and Africa have become major trading partners in recent years. Chinese companies have made a big push into Africa seeking raw materials like oil. And enterprising Africans now travel to China to buy cheap goods at the source and ship them home. Today, the city of Guangzhou, near Hong Kong, is home to some 10,000 Africans, the largest such community in China. The city's Little Africa neighborhood is a world unto itself, with restaurants specializing in African food to money changers who deal in the Nigerian currency. But doing business in the city's informal economy is full of risks.

The Tangqi wholesale mall in Guangzhou, China, is a labyrinth of tiny clothing shops. They look more like storage units, each one crammed full of T-shirts and jeans.

From morning well into the night, traders pack hundreds of T-shirts and jeans into boxes. Then comes the packing tape — a rip that echoes through the halls. This is the rhythm of Tangqi: pack and tape, pack and tape.

A Nigerian trader named Fortunato packs clothing in front of his shop. Fortunato is what he calls his "designer name." He prefers this nickname since his legal status in China is, well, questionable. Fortunato's shop is in a narrow hallway nicknamed "Lagos Line." The majority of clothing bought and sold down the line is headed to Lagos, Nigeria's commercial capital.

"Before, we used to buy [clothing] from Thailand, from Pakistan, India. All of a sudden fashion changed, and it became a China trend," he says.

He came to China to cash in on this trend. But rather than simply buying cheap clothes to send home, Fortunato has taken it one step further. He formed a partnership with a fellow Nigerian trader called Niceguy — that's his designer name — and they started a brand of clothing they call Niceguy Fortunato.

The name doesn't quite roll off the tongue, but their clothing has flown off the racks. Their first design was a khaki button-down shirt. Over the breast pocket is a patch that says "survival." According to Niceguy, whose nickname seems at odds with his somewhat intimidating presence, the shirt was an instant hit in the markets in Nigeria.

Success, however, was not instant. Niceguy graduated several years ago from a Nigerian university with an engineering degree, but he couldn't find a job. He heard from ex-classmates that he could easily get a visa to China. That sounded better than being unemployed in Nigeria, so he managed to put together a few thousand dollars and paid an agent to secure a visa. 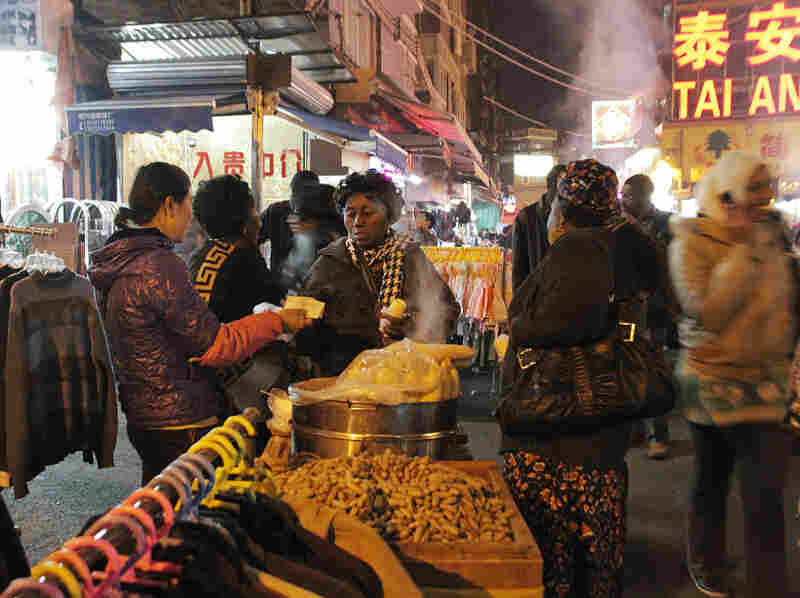 The Little Africa neighborhood in Guangzhou is dominated by African immigrants who run the shops and stalls, but many customers are Chinese. Nina Porzucki for NPR hide caption 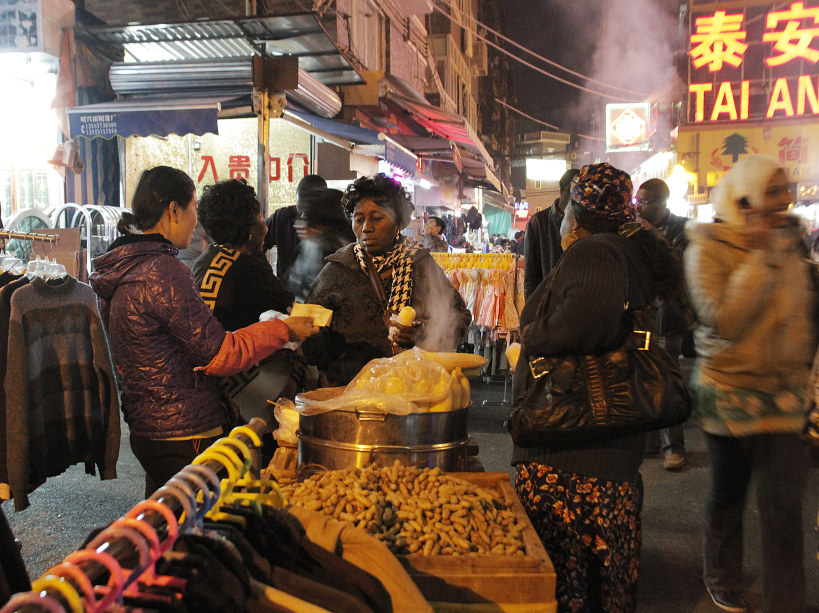 The Little Africa neighborhood in Guangzhou is dominated by African immigrants who run the shops and stalls, but many customers are Chinese.

He arrived at the Guangzhou airport three years ago with the phone number of a cousin, just a few hundred dollars left in savings, and no real idea of what he would do. The first year was rough. With no job and little money, Niceguy worried about where he would get his next meal. He couldn't afford to rent a room.

"I keep thinking, where am I going to sleep when it's dark?" he says. He remembers shivering one night on the tile floor of his friend's room and deciding to go back to Nigeria. The next day he told his friend about his decision, and his friend scolded him: "You have two hands, two legs. It would be a disgrace to go back."

Niceguy buckled down and tried his hand at whatever job would bring him some money — escorting new traders to the markets or selling cheap bracelets. He did manage to get on his feet, though he still faced the major obstacle of extending his visa.

Deciding To Stay Without A Visa

Most Nigerian traders enter China with a 30-day visa. Extensions are hard to come by and expensive — an agent might secure one for around $3,000. After 30 days, many traders have to decide whether to go home, or stay without a visa and take their chances.

Niceguy was refused a visa extension, but decided to stay in the country without one.

Fortunato crossed that bridge years ago. He's been living without a visa since 2007, and says he's not afraid of being caught.

"What you do is you just keep moving and say to yourself whatever happens, it happens," he says.

He's had one close call on the street in front of the Tangqi market. One evening while he was standing at the curb waiting to cross the street, a policeman asked for his passport. Fortunato ran away.

If a trader is caught, he or she might be able to bribe their way out for hundreds or thousands of dollars before they are taken to prison, where a bribe would become even more costly. 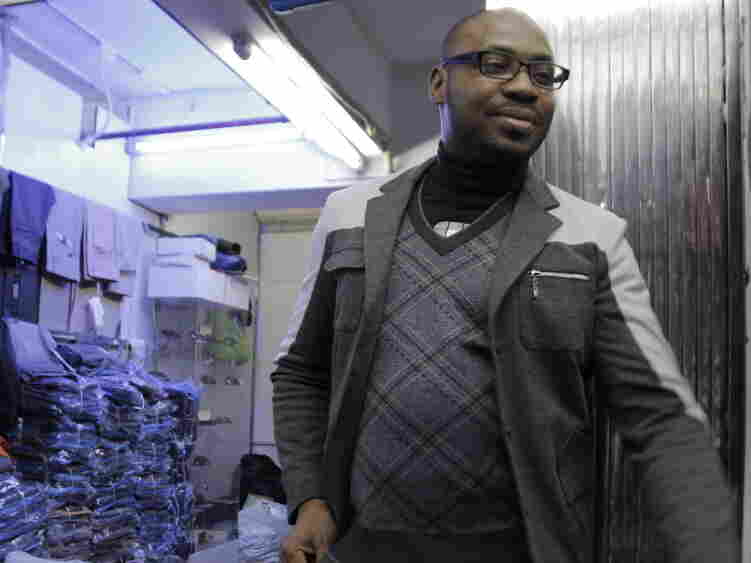 A trader who goes by the name Fortunato — he says it's his "designer name" — stands outside one of the clothing shops in the Little Africa section of Guangzhou. He's been living in the Chinese city for five years. Nina Porzucki for NPR hide caption 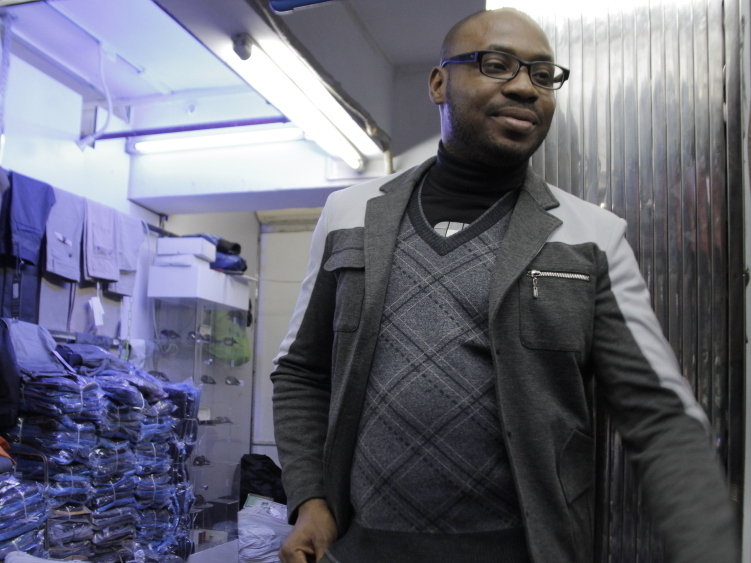 A trader who goes by the name Fortunato — he says it's his "designer name" — stands outside one of the clothing shops in the Little Africa section of Guangzhou. He's been living in the Chinese city for five years.

Many Nigerian traders at the Tangqi market have overstayed their visas; that doesn't slow down business, but it has created a certain tension. "Anything could happen," says Fortunato. "When you push somebody so close to the wall, he has to react."

A Confrontation With Police

Plainclothes officers raided Tangqi market in search of illegal currency traders, and this touched off a near riot. Undocumented traders fled from the mall in fear. One man frantic to escape jumped from an upper-story window. An angry mob carried his injured body to the police station, stopping traffic and sparking an extremely rare foreigner-led protest in China.

Lu Shaye, director general of African Affairs at the Ministry of Foreign Affairs in Beijing, understands that opening up trade has its challenges.

He recites a familiar line of the Chinese leader who opened the country's economy: "As Deng Xiaoping said, 'Once we open our window, flies and mosquitoes will come in as well.'"

Immigration is one of the issues that China will face as it continues to open up, says Lu. This past December, China began to draft new legislation on the exit and entry of foreigners to update China's first laws on immigration enacted in 1985.

Today, the Tangqi trading mall is doing business as usual. Traders walk the halls checking out the clothing for sale, shaking hands and making deals. Everyday at noon, the rip of packing tape stops, Bibles are passed around, and the men stand in the hallway to pray.

One of the loudest prayers comes from Niceguy. He's come a long way from sleeping on the floor. He and Fortunato now rent a modern apartment in one of Guangzhou's new suburbs. They hope to expand to the jeans market. But even if they just keep selling out of each batch of shirts, that's good enough for now.

Nina Porzucki is NPR's Above the Fray fellow. She spent a month in Guangzhou, China, reporting on the Little Africa community.

An African Trader And The Perils Of Business In China April 26, 2012