Accessibility links
Teaching The L.A. Riots At Two City Schools It's been 20 years since four police officers were acquitted in the beating of Rodney King, and Los Angeles erupted in race-fueled riots. NPR visited two schools — one not far from the flashpoint of the riots, and the other surrounded by million-dollar homes — to see how the riots are being taught to students who weren't born when the violence hit. 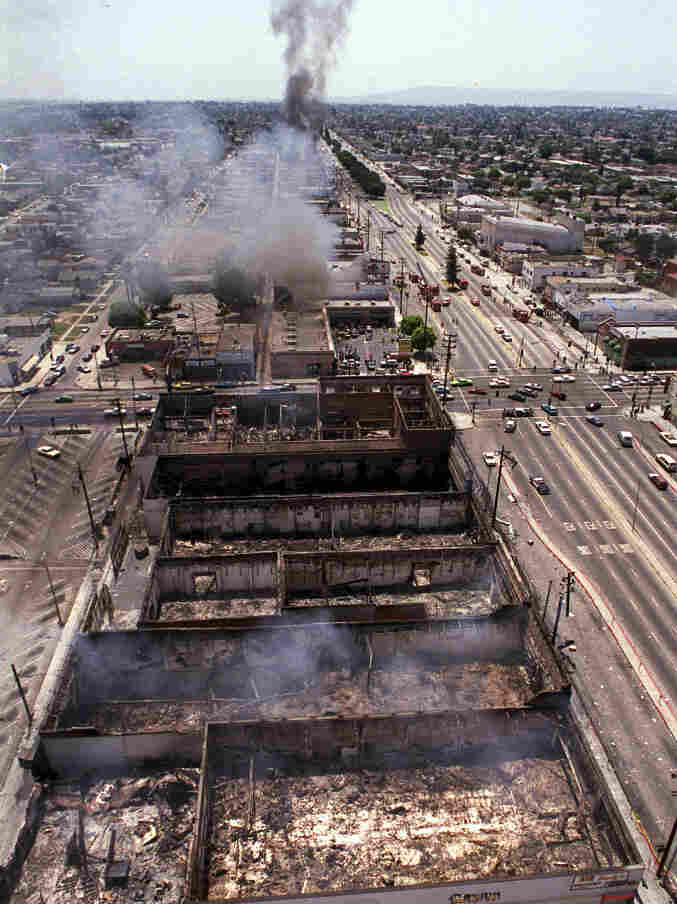 Smoke rises as fires burn out of control near Vermont Street in Los Angeles on April 30, 1992. Riots erupted after L.A. police officers were acquitted in the beating of black motorist Rodney King. Paul Sakuma/AP hide caption 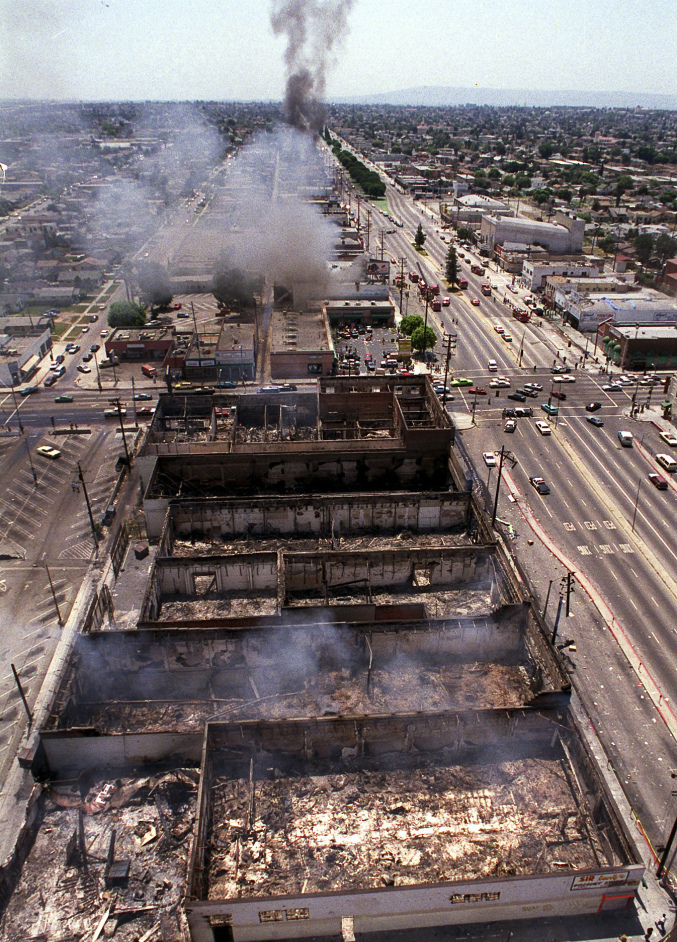 Smoke rises as fires burn out of control near Vermont Street in Los Angeles on April 30, 1992. Riots erupted after L.A. police officers were acquitted in the beating of black motorist Rodney King.

It has been 20 years since four police officers were acquitted in the beating of Rodney King, and L.A. erupted in race-fueled riots. Many in Los Angeles, including students who weren't born when the riots hit in April 1992, are reflecting on those days of anger, looting and destruction, asking why it happened and how to make sure it doesn't happen again.

Most history books used in L.A. schools end at the Civil Rights era of the 1950s and '60s, so 11th-grade history teacher Anthony Lawson, who was 10 at the time of the riots, has to improvise. Lawson teaches at Animo Locke High, a charter school. Everyone in the class is 16 or 17, black or Latino, and lives in the neighborhood, which isn't far from the flashpoint of the riots.

"What causes people to riot?" Lawson asks his class.

Lawson shoots back: Were the rioters reacting to those causes, or were they just selfishly breaking the law?

Monica Revelo says all the rioters did was destroy their own community. "What do you get out of it?" she asks.

For classmates Artesia Cox, it's about being angry and being heard. "You get noticed," she says.

"But not in a good way," Revelo replies.

"They already did," Cox says.

These students say the conditions where they live, where the riots hit, haven't changed much.

Delshone Patton says the gangs are still a problem.

"People are still ... going out shooting little kids for no reasons," he says. "A 7-year-old got killed before; 5-year-olds get killed."

"A lot of things like poverty are still existing around here," he says. "A lot of liquor stores haven't been taken down. A lot of things that oppressed us back then ... we [are] still seeing them today."

Twenty miles west of Locke, at Pacific Palisades Charter High School, the same topics — poverty and racial tensions — are discussed. The setting couldn't be more different, though. Pali High sits on a bluff, just blocks from the beach, surrounded by the Santa Monica Mountains and million-dollar homes.

Chris Lee teaches honors economics. His students are a mix of races and incomes and come from all over L.A., but in these pristine surroundings, poverty is taught from handouts.

"What I notice is that in the third graph was that the median household income for black and Latino people over the past 20 years has risen to the point where it was 20 years ago for white people," he says.

Lee notes: "Although everyone's income level has gone up, the gap between them has doubled."

Students move the discussion deeper. They want to talk about racism.

Amy Dersh, who is white, says outside of school she gets stared at when she's hanging out with black friends.

"I've noticed, you know, when I'm out and about with them, that we get looks," she says. "And if I'm with, let's say a black boy, and we're holding hands, especially we get looks then."

Another white student says that when he walks into the local pharmacy, his black friend has to leave his backpack at the door.

Lee tries to get the students to talk about preventing another riot. Most agree the answer is getting to know each other better.

"If everybody in Los Angeles, every school had this kind of education with different kids from different neighborhoods, different races, then I think that's one of the first things to prevent riots from happening," she says.

That message of racial and economic harmony was a bit harder to find back in South L.A. at Animo Locke High School.

Students agreed that everyone should pitch in, work together to build up their neighborhood, but they also said it's hard to rise out of poverty when it has persisted for decades.

"We're getting more poverty places across the country. That's what I'm saying. If there's going to be riots here now, I think it could spread onto everywhere," Manuel Amaya says.

Lawson, the teacher, says he hopes for so much more for his students, and if their future is to be brighter, he says, they need to know what happened in their community 20 years ago.