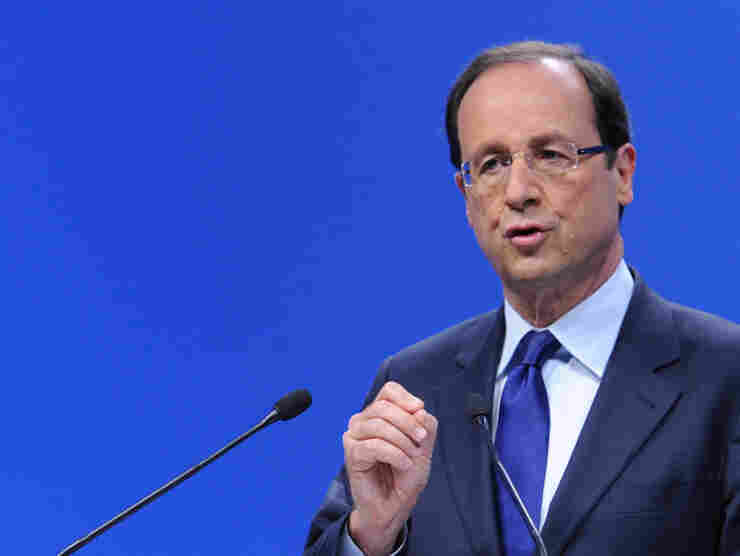 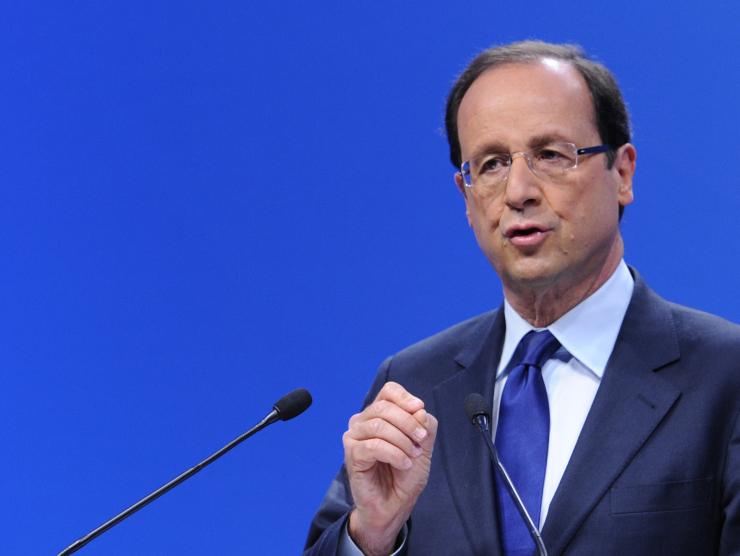 Socialist candidate for the 2012 French presidential election, Francois Hollande, speaks at his campaign headquarters in Paris on Jan. 14, 2012. Hollande is facing current French president Nicolas Sarkozy in a run off election.

Read Another Opinion About The French Presidential Election

Anne-Elisabeth Moutet is a regular columnist for the London Telegraph and a commentator for the BBC.

He was never supposed to be president. For years, rather charmingly, François Hollande didn't even seem to care, unlike, say, the single-minded Nicolas Sarkozy, who had thought of little else since his early 20s. As spokesman, then leader of the French Socialist party (a job which doesn't automatically entail heading the government in case of electoral victory), Hollande looked blessedly free of the pompousness that afflicts so many French politicians. He was capable of humor, even — much rarer in Paris — of self-deprecation. His rivals among the notoriously faction-riven Socialists despised him for it.

Far beyond Socialist party confines, the general view on Hollande was, to say the least, ungenerous. "Second-tier politico" was one of the kindest tags. "He's a provincial mayor who's never held a cabinet job," people told you. "He was the most disorganized party leader in memory."

When she succeeded Hollande's ten-year tenure as Socialist chief, the former Mitterrand employment minister Martine Aubry — now widely tipped to become Hollande's prime minister — famously said that Hollande had left the party in such a mess that she even had to unblock the headquarters toilets herself. Dominique Strauss-Kahn, before his career's disastrous implosion, quipped that Hollande has absolutely zero intellectual curiosity. Segolène Royal, Hollande's former partner of 23 years and the mother of his four children, who beat him to the Socialist nomination in the previous presidential race, said that he was "incapable of action" and had "achieved nothing in 30 years of public life." And these are just his political friends.

But as the French vote today in the first round of the presidential election, a kind of inevitability has seized the nation's mood. Even though the final result will only be known in the runoff, overwhelming expectations are that for failing to engage his compatriots' affection and respect, Sarkozy is truly getting the boot this time. Too brash, too bling, too eager, too tin-eared to the needs of the French to be cosseted, even lied to. The un-glitzy, uncharismatic Hollande will in all likelihood become the Fifth Republic's seventh president since Charles de Gaulle, no doubt prompting from the newly "cultured" Sarkozy (Carla has been overseeing his reading list) an updating of Winston Churchill's famous quote on Clement Attlee: On May 7, an empty taxi will stop in front of the elysee palace and M. Hollande will step out of it.

So what can America expect of France's swing to the left under a president who speaks even less English (or any other language) than Sarko, and has zero experience of foreign affairs?

If one thing emerged clearly from this lackluster presidential campaign, it's an overall sock-the-rich theme, the violence of which even Goldman Sachs's CEO hasn't experienced. Everyone from Marine Le Pen to Hollande's own militant dissident, Jean-Luc Melenchon, the "ultra-left candidate" who may yet come in third tonight, and including the Centrists, the Greens, and Sarkozy himself, has been at it. The candidates have all demanded more regulation of financial markets, denounced the shelter our tax exiles find in England, Belgium, and Switzerland; and claimed that the New York Stock Exchange and the City of London are wantonly speculating against the euro, aided and abetted by the ratings agencies, the Financial Times, and the Wall Street Journal.

Hollande himself is a technocrat, a civil servant: he graduated from the elite ENA school, the incestuous breeding ground for most French politicians, top bosses, and mandarins. He has little or no ideology, but he has also no experience at all of private enterprise: He's been on a government payroll of some sort since his student days. This means he has no qualms about paying lip service to the anti-capitalist rhetoric of the campaign.

The Hollande entourage, who learned from Mitterrand that you can promise anything and do the exact opposite, say in private that there will be little substance to the current threats of punitive taxation of the middle classes and corporations. They aren't taking sufficiently into account that in the economy, even more than in politics, perception is reality. If, in the wake of Hollande's election, there's a run on the euro, and Moody's, the ratings agency, downgrades France's debt (Standard & Poor's already shoved us down to AA+ from AAA last January), expect, beyond the usual saber-rattling speeches, a number of quiet behind-the-scenes moves designed to control financial markets, in Brussels and elsewhere. There will be obscure amendments aiming to reframe regulation to hamstring pension funds and tax financial transactions, and impose extra costly compliance obligations. This will have an effect, just as any trans-border deal affecting an American and a French institution will be more easily understood in the light of France's implacable rivalry with "Anglo-Saxon unfettered markets."

Unlike the hyperactive Sarkozy, who treated his prime minister like a mere chief of staff, Hollande will be only too happy to let his ministers make (often unpopular) decisions. In this as in many other things, Sarkozy broke with Fifth Republic tradition to his own detriment: De Gaulle fashioned the Constitution so that the prime minister was in effect a circuit breaker, shielding the president — a tactic followed by François Mitterrand, in whose Elysee Hollande worked as a junior adviser. Who Hollande appoints to his cabinet will therefore matter far more than it did for his predecessor.

With Martine Aubry, who is the daughter of Jacques Delors, former president of the European Commission and artisan of the Maastricht treaty, as probable prime minister, and a finance minister likely to be Pierre Moscovici, a former European affairs minister, it's easy to guess the general tone of French policy for the next five years. One obvious casualty will be NATO, which France rejoined under Nicolas Sarkozy, in favor of more European Defense Integration. Hollande would never have taken the lead with the United States, Britain, and NATO against Qaddafi, for instance.

Because Hollande knows little of international affairs, he is likely to pick the staunchly anti-"anglo-saxon" Hubert Vedrine, a former Mitterrand chief of staff who was an extremely capable foreign minister under Chirac and Jospin. Vedrine, the son of a Mitterrand acolyte and junior Vichy official, Jean Vedrine, is a clever, urbane ENA graduate with a clear vision of a foreign policy designed to reduce the West's influence in global affairs. (He coined the word "hyperpower" to refer to Washington. It was not meant as a compliment.) Vedrine has done much, like his political adversary Jacques Chirac, to foster the notion of "multipolarity," in which many more international players can influence world affairs, U.N.-like. Only uncharitable minds would point out that this is a recipe for world chaos.

But it wasn't Vedrine who prompted Hollande to vow that, once elected, he would bring all French troops back from Afghanistan before the end of the year — even though this is far from a burning issue in a country that has few qualms about deploying its professional army abroad, in the Ivory Coast, Mali, or Chad. On Friday, Hollande repeated in a radio interview that French soldiers would be back before the end of 2012 "even if we need to hire Antonov transport planes from the Russians." At this late stage of the proceedings on the ground, the departure of the French contingent (whose special forces were quietly but ruthlessly efficient earlier in the conflict) is unlikely to change much about the Afghan military situation. But as a message sent to the Taliban, to our allies, and to the rest of the world, it will be disastrous, and may well linger as the signature tone of the forthcoming Hollande presidency.