Accessibility links
The Nation: The End Of Sarkozy? The extreme right National Front candidate Marine Le Pen has thrown French president Nicolas Sarkozy's re-election campaign to the right. Agnès Catherine Poirier of The Nation argues that if Socialist Francois Hollande wins the election it may be because Sarkozy has divided France for five years.

The Nation: The End Of Sarkozy?

The Nation: The End Of Sarkozy? 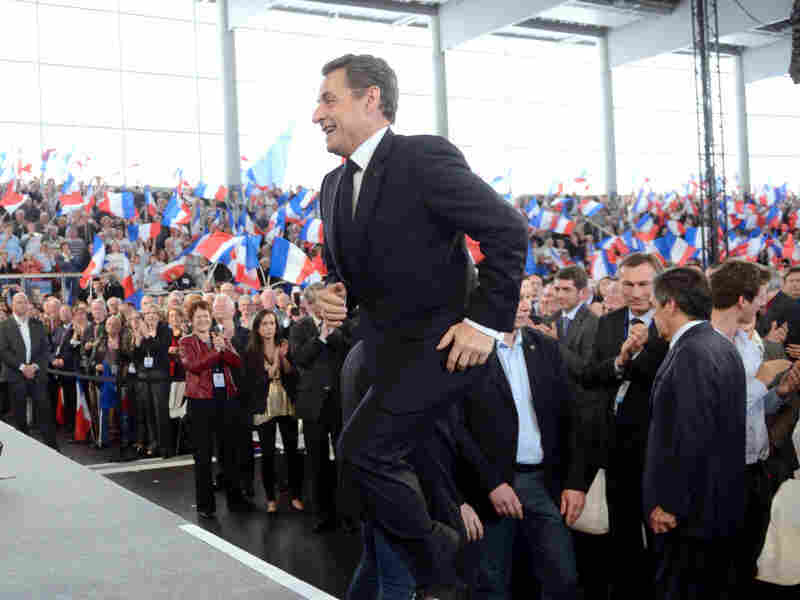 France's incumbent President Nicolas Sarkozy arrives on stage to deliver a speech during a campaign meeting in Cernay, eastern France, on April 25, 2012. Sarkozy will face his rival Socialist Party Francois Hollande in a final round on May 6, 2012. Eric Feferberg/AFP/Getty Images hide caption 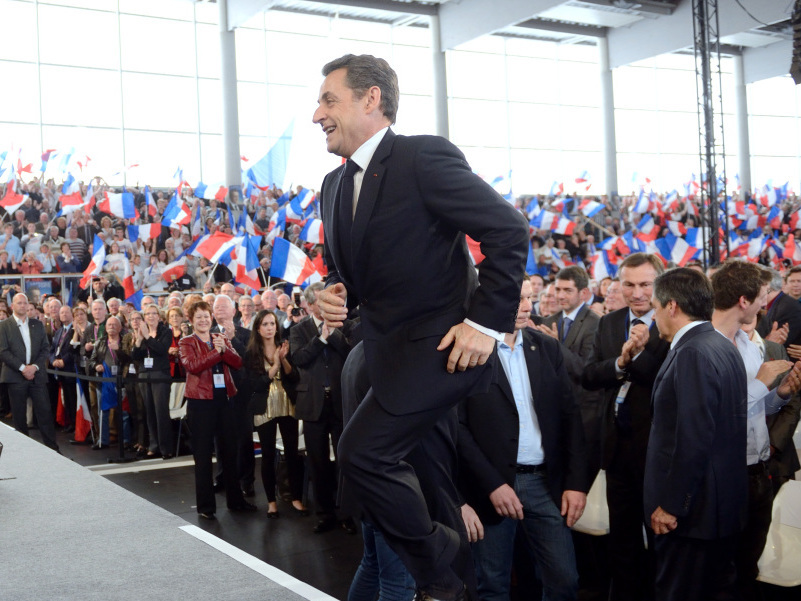 France's incumbent President Nicolas Sarkozy arrives on stage to deliver a speech during a campaign meeting in Cernay, eastern France, on April 25, 2012. Sarkozy will face his rival Socialist Party Francois Hollande in a final round on May 6, 2012.

Read Another Opinion About The French Presidential Election

Agnès Catherine Poirier is a French journalist and writer based in London.

Since the beginning of the Fifth Republic, in 1958, the French have voted nine times to elect their president. Each time, they have flocked to the polling stations. The lowest turnout was in 2002, with 71 percent participation, when extreme-right National Front leader Jean-Marie Le Pen shocked the nation by making it to the second round, before losing to Jacques Chirac in the runoff. The turnout in other European countries pales by comparison; in recent national elections it has ranged from 47 percent (Switzerland) to 65 percent (Britain) to 71 percent (Germany).

This past Sunday, 80.4 percent of Frenchvoters cast their ballots. Pollsters had frightened many on the center and left who remembered 2002, when the record abstention seemed partly responsible for Le Pen's success. Despite the heavy turnout this year, his daughter Marine, leader of the National Front since December 2010, reached a record level with 17.9 percent of the vote — 6.4 million, compared with 4.4 million for Jean-Marie a decade ago. While Marine was third behind Socialist leader Francois Hollande (28.6 percent), who as predicted edged out right-wing incumbent Nicolas Sarkozy (27.1 percent), her finish was no small achievement for the far right, and a scary prospect for French democracy.

Le Pen's exploit is, however, not all that surprising. When I met her a few months ago, she was on a PR campaign to "take the devil out" of the National Front, as the media have put it (dediabolisation), rejecting for instance the "extreme right" epithet. Born in 1968, the twice-divorced single mother said she was in favor of abortion and gay marriage. Her economic program included the renationalization of postal services, state-funded initiatives such as a five-year reindustrialization plan and infrastructure improvements, as well as more spending to improve public services. She also appeals to young male rural voters with little education who feel despised by the Parisian elites and left out by globalization.

This year's election proved to be a strange one: aggressive and digressive at the same time. Important issues such as the state of the economy, the euro crisis, unemployment, education and health were simply ignored by Sarkozy, who was too busy attacking his Socialist rival on frivolous details such as Hollande's alleged lack of experience at the government level (a weak argument, since Hollande, a lawyer by training, has been an adviser to former president Francois Mitterrand, an MP for fifteen years, a mayor and a president of one of France's twenty-two regions). Such bullying tactics clearly didn't pay off, and Hollande may be reaping the benefit of refusing to engage in personal attacks. "I'm not interested in playground scuffle," he said. French voters seem grateful.

Unfortunately, the campaign was polluted with absurd controversies, such as the one about halal meat. Marine Le Pen declared that 90 percent of meat consumed by Parisians was halal and that people shockingly didn't know about it. Sarkozy followed suit, while the rest of the country just watched, incredulous. One poll indicated that an overwhelming majority of the public couldn't care less about eating halal unknowingly. The matter did, however, monopolize the airwaves and editorials for two full weeks.

Then French-born Salafi jihadist Mohamed Merah struck in southwestern France, killing three paratroopers, three Jewish children and one rabbi before dying in a police siege of his Toulouse apartment. Marine Le Pen, who has always talked about the "enemy within," declared that French-born citizens of second- and third-generation immigrants from North Africa were being brainwashed by foreign radical imams. After the attack Sarkozy supervised roundups in extremist Islamist circles, and security was suddenly back on the table. However, polls suggested that it was a priority for only 8 percent of the electorate. What the French wanted to hear about was still the economy, education and health.

Rising steadily in the polls throughout the campaign had been Jean-Luc Melenchon, nicknamed the French left's pit bull by British commentators. To the left of Hollande's Socialists, Melenchon's Left Front includes the Communists and other small radical left parties. A formidable orator who somehow comes off as both pugnacious and genial, Melenchon was polling at only around 5 percent at the beginning of the campaign, but he quickly climbed to 15 percent. Attracting 100,000 people in rallies on the streets of Paris, as well as big crowds on Marseille beaches, in Toulouse and in other cities, Melenchon became the star of the campaign.

Melenchon said he had one mission in life: to reclaim the working-class vote from Le Pen's National Front. But he ended up with only 11.1 percent, and what would have seemed a triumph a few weeks earlier suddenly looked like failure. Alas, 2.4 million more voters opted for Le Pen, making her by far the strongest representative of the working class. Perhaps Melenchon's constant references to the French Revolution were missed on young uneducated French men, many of whom seemed to prefer Marine's coarser language about "the rotten Parisian elites who always short-change us." The centrist Francois Bayrou, a perennially popular politician, came in a disappointing fifth place this time, with barely 10 percent of the vote.

Even though Le Pen didn't make it to the second round, she will weigh heavily on the May 6 runoff and, of course, on the parliamentary elections on June 10 and 17. First of all, her voters hold Sarkozy's fate in their hands. He needs almost all of them to defeat Hollande, but will they switch to him? Nothing is less certain. Louis Aliot, the National Front's vice president and Le Pen's partner, has already declared that he won't vote for either Sarkozy or Hollande.

While the two front-runners are busy trying to appeal to Le Pen's voters — especially the younger ones, who are not seen as xenophobic but rather as worried about the economic crisis — pollsters estimate that perhaps half will turn to Sarkozy, a quarter to Hollande and a quarter will abstain. Such a scenario would herald the end of Sarkozy's presidency. As Le Pen declared on Sunday evening, "I'm simply waiting for Sarkozy and his party to implode."

In the June elections Le Pen will attempt to break up the right in the National Assembly, and thus end the hegemony of Sarkozy's UMP party (Union for a Popular Movement). She dreams of three equal forces: the UMP, Francois Bayrou's center and the National Front, with her playing referee, a novel and unsettling prospect.

If Sarkozy is defeated on May 6 — especially if by a large majority, as many are predicting — it will be as much an indictment of his policies and personality as a victory for the genial and serious Hollande. Sarkozy has antagonized and divided France for five years, feeding voter frustration and throwing many into Marine Le Pen's open arms. Hollande, if he is elected president, will inherit a very precarious situation.