Accessibility links
Foreign Policy: What Sex Means For World Peace The very best predictor of a state's peacefulness is how well its women are treated. Valerie M. Hudson of Foreign Policy argues that the primary challenge facing the 21st century is to eliminate violence against women and remove barriers to developing their strength, creativity, and voices. 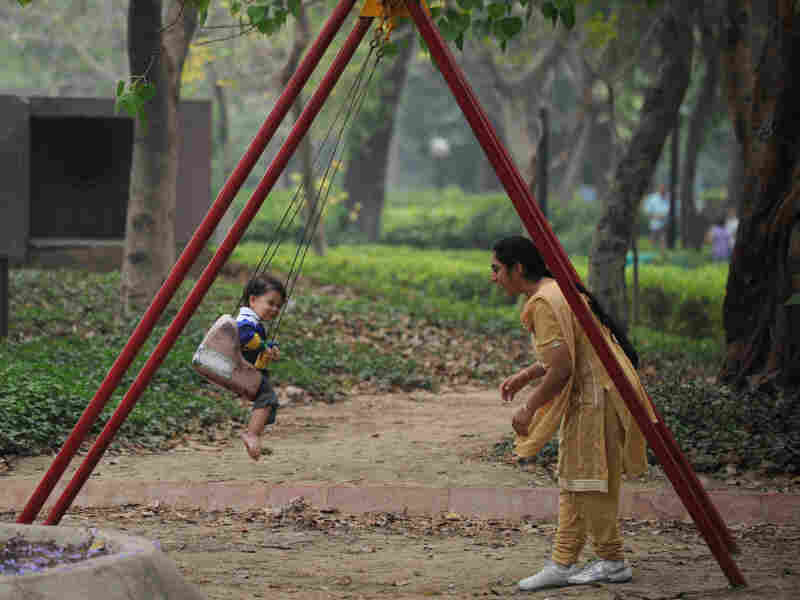 A child rides on a swing at a park in New Delhi on April 15, 2012. Sex selection of foetuses in India has led to 7.1 million fewer girls than boys up to age six, a gender gap that has widened by more than a million in a decade, according to a study released in 2011. Sajjad Hussain/AFP/Getty Images hide caption 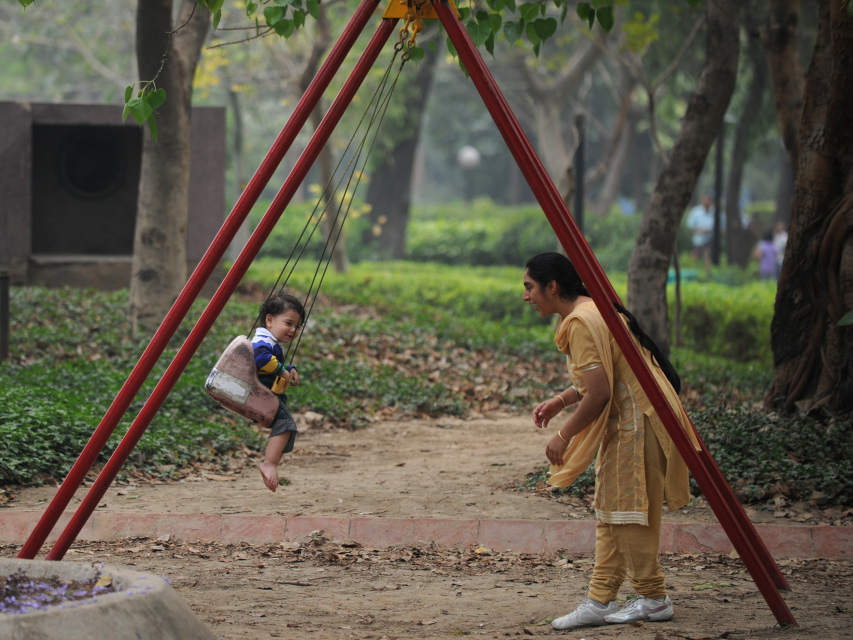 A child rides on a swing at a park in New Delhi on April 15, 2012. Sex selection of foetuses in India has led to 7.1 million fewer girls than boys up to age six, a gender gap that has widened by more than a million in a decade, according to a study released in 2011.

Valerie M. Hudson is professor and George H.W. Bush chair in the Bush School of Government and Public Service at Texas A&M University.

In the academic field of security studies, realpolitik dominates. Those who adhere to this worldview are committed to accepting empirical evidence when it is placed before their eyes, to see the world as it "really" is and not as it ideally should be. As Walter Lippmann wrote, "We must not substitute for the world as it is an imaginary world."

Well, here is some robust empirical evidence that we cannot ignore: Using the largest extant database on the status of women in the world today, which I created with three colleagues, we found that there is a strong and highly significant link between state security and women's security. In fact, the very best predictor of a state's peacefulness is not its level of wealth, its level of democracy, or its ethno-religious identity; the best predictor of a state's peacefulness is how well its women are treated. What's more, democracies with higher levels of violence against women are as insecure and unstable as nondemocracies.

Our findings, detailed in our new book out this month, Sex and World Peace, echo those of other scholars, who have found that the larger the gender gap between the treatment of men and women in a society, the more likely a country is to be involved in intra- and interstate conflict, to be the first to resort to force in such conflicts, and to resort to higher levels of violence. On issues of national health, economic growth, corruption, and social welfare, the best predictors are also those that reflect the situation of women. What happens to women affects the security, stability, prosperity, bellicosity, corruption, health, regime type, and (yes) the power of the state. The days when one could claim that the situation of women had nothing to do with matters of national or international security are, frankly, over. The empirical results to the contrary are just too numerous and too robust to ignore.

But as we look around at the world, the situation of women is anything but secure. Our database rates countries based on several categories of women's security from 0 (best) to 4 (worst). The scores were assigned based on a thorough search of the more than 130,000 data points in the WomanStats Database, with two independent evaluators having to reach a consensus on each country's score. On our scale measuring the physical security of women, no country in the world received a 0. Not one. The world average is 3.04, attesting to the widespread and persistent violence perpetrated against women worldwide, even among the most developed and freest countries. The United States, for instance, scores a 2 on this scale, due to the relative prevalence of domestic violence and rape.

It's ironic that authors such as Steven Pinker who claim that the world is becoming much more peaceful have not recognized that violence against women in many countries is, if anything, becoming more prevalent, not less so, and dwarfs the violence produced through war and armed conflict. To say a country is at peace when its women are subject to femicide — or to ignore violence against women while claiming, as Pinker does, that the world is now more secure — is simply oxymoronic.

Gender-based violence is unfortunately ingrained in many cultures, so much so that it can take place not only during a woman's life but also before she is even born. On our scale measuring son preference and sex ratio, the world average is 2.41, indicating a generalized preference for sons over daughters globally. And in 18 countries, from Armenia to Vietnam, childhood sex ratios are significantly abnormal in favor of boys. The United Nations Population Fund suggeststhat, as of 2005, more than 163 million women were missing from Asia's population, whether through sex-selective abortion, infanticide, or other means. Demographer Dudley Poston of Texas A&M University has calculated that China will face a deficit of more than 50 million young adult women by the end of the decade. Think of the ways this imbalance will affect China's state stability and security — and in turn its rise to world power — in this century.

Other global indicators are equally disheartening. In family law, women are disadvantaged in areas such as marriage, divorce, and inheritance. This inequity in turn serves as a foundation for violence against women, while also undercutting their ability to fend for themselves and their children. My colleagues and I found that the world's average score for inequity in family law is 2.06, indicating that most countries have laws that discriminate to a greater or lesser degree against women. And some of the countries in the Arab Spring, including populous Egypt, are actually poised to regress on this scale. Maternal mortality, meanwhile, clocks in globally at 2.45, a truly lamentable comment on state priorities and the value of female life.

Lastly, the inclusion of women's voices in decision-making bodies, as captured by the level of female participation in governments, measures an abysmal world average of 2.74. This is no surprise, given that the level of participation of women in government is less than 20 percent. But it's also true that some of the worst countries when it comes to the representation of women in national government include democracies such as Japan (13.4 percent in the Diet) and South Korea (14.7 percent), not to mention Hungary (8.8 percent). The United States is below average, with only 17 percent female participation in Congress. Ironically, when the United States invaded Afghanistan and Iraq, it urgedthat these countries have a minimum of 25 percent female participation, and now both countriesscore higher than their invader on this indicator: Afghanistan's parliament is nearly 28 percent female, and Iraq's is just over 25 percent. In that one respect, the United States has done better by Afghan and Iraqi women than by its own.