Accessibility links
Rubio's 'Dream Act Light' Jumbles Immigration Issue People on all sides of the debate are watching Florida Sen. Marco Rubio attempt to craft a proposal that helps to repair the GOP brand among Hispanics, appeals to independent voters who favor a path to citizenship, and upends President Obama's advantage on the issue without alienating conservatives. 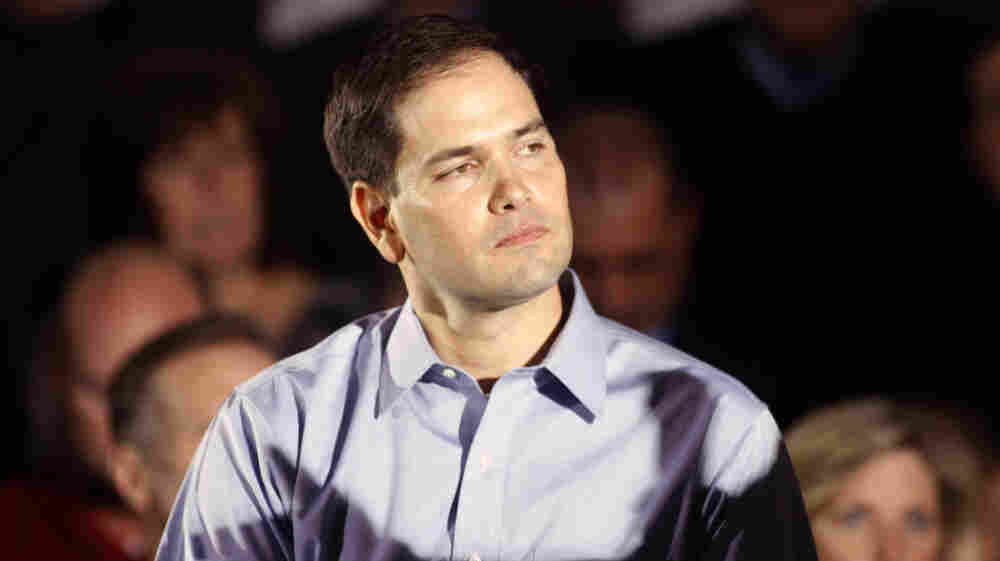 Sen. Marco Rubio, R-Fla., the son of Cuban immigrants, has urged his fellow conservatives to soften their rhetoric on illegal immigration. Above, he makes a campaign stop with Republican presidential candidate Mitt Romney on Monday in Aston, Pa. Jessica Kourkounis/Getty Images hide caption

Florida Sen. Marco Rubio spent the week in the spotlight as the latest potential running mate for presumptive Republican presidential nominee Mitt Romney. The Hispanic lawmaker, anointed as the party's best hope for appealing to more Latino voters, came loaded for bear — rolling out an alternative to the Democrats' Dream Act.

Rubio has released few details of his plan to address illegal immigration, and says he wants to introduce a bill in the Senate in June. But, like the Democrat-backed version defeated by Senate Republicans in 2010, the legislation would help young people brought to the U.S. as children stay in the country legally if they attend college or serve in the military. By most estimates, between 800,000 and 1.2 million people would be eligible.

The key distinction between the Rubio and Democratic plans is in how people would be legalized. The original act would put people on a path to citizenship. Rubio's plan would stop short by issuing non-immigrant visas allowing recipients to remain in the U.S. for college or military service.

Rubio's critics say his plan would create a permanent second class of people unable to obtain the full rights of citizenship. Supporters, however, say visa recipients could still apply for citizenship through the existing process, which can take a decade or longer.

In contrast, Democrats say, their plan would naturalize people as citizens far sooner.

Rubio's Evolution On The Issue

Rubio's move is a departure from the hard line on illegal immigration he took while running for the Senate in 2010, angering many Hispanic groups who had hoped he would help push Republicans toward a pro-citizenship stance.

Rubio, 40, the son of Cuban immigrants, ran as a Tea Party favorite and avowed conservative. Since then, he has softened his position, having publicly urged fellow Republicans to tone down their hostile rhetoric about illegal immigrants before weighing in with his proposal.

With his considerable political talents, and hailing from an important presidential battleground state, Rubio has emerged as his party's most prominent Latino.

Hispanics' rapid population growth will give them a pivotal role in the 2012 elections, particularly in some battleground states. As a vice presidential candidate, or perhaps in some other prominent role in the Romney campaign, Rubio could help the Republican Party siphon Hispanic votes from the Democrats.

The political crosscurrents at play are dizzying. People on all sides of the immigration debate are closely watching Rubio assume the forbidding task of carefully crafting a proposal that meets several objectives: help repair the GOP brand among Hispanics; appeal to non-Hispanic independent voters who favor a path to citizenship; and upend President Obama and the Democrats' advantage on the issue, all without angering conservatives.

Here's a sampling of the wide range of opinions about Rubio's version of the Dream Act. This story continues below the graphic.

Obama seemed to derisively allude to the Rubio plan in a recent interview with the Spanish-language network Telemundo: "This notion that somehow Republicans want to have it both ways — they want to vote against these laws and appeal to anti-immigrant sentiment ... and then they come and say, 'But we really care about these kids and we want to do something about it' — that looks like hypocrisy to me."

He's not the only presidential candidate who might feel pressure. Romney himself must consider whether to embrace Rubio's proposal and risk being lambasted again by conservatives and the Obama campaign as a flip-flopper. The last Republican presidential nominee, Arizona Sen. John McCain, lost to Barack Obama in part because he was unable to energize conservatives, who hadn't forgiven him for the McCain-Kennedy immigration bill, which would have set a path to citizenship.

So far, reactions to the Rubio proposal have been mixed, even unexpected. For instance, some immigrant advocates who usually side with the Democrats on the issue have enthusiastically gotten behind Rubio, even though his plan appears to fall short of the original Dream Act. Their decision was made easier by their frustrations over Obama's failure to get the original act through Congress, as well as the record number of deportations processed by his administration.