Accessibility links
Profiled By The TSA? There's An App For That Sikhs and other religious and minority groups often say they're unfairly singled out for additional screening. Now they hope to make their case with the help of a new mobile app. 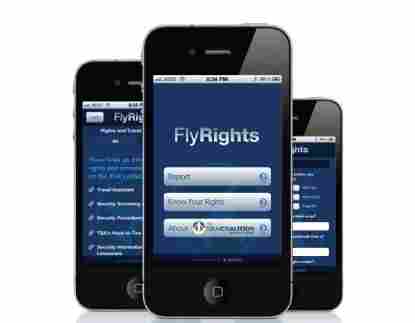 More than a decade after 9/11, heightened security at U.S. airports has become routine, yet some religious and minority groups say they're unfairly singled out for even more screening. Well, now there's an app for that.

The mobile app is called FlyRights. Travelers who suspect they have been profiled take out their smartphone, tap a finger on the app and answer about a dozen questions. Then they hit "submit" and an official complaint is filed immediately with the Transportation Security Administration.

The app is the work of civil rights groups led by The Sikh Coalition. Amardeep Singh, co-founder of the Coalition, says the idea came from Sikh entrepreneurs in Silicon Valley who felt they were being stopped unfairly at airports, too often.

"They literally said to one of our staff members, 'There should be an app for that'," Amardeep said. "We thought, great idea, let's start working on it."

The app has already been tested with the TSA. Amardeep hopes the app will encourage more people to file complaints so that there is more accurate data on improper screening.

Hardayal Singh has a long, black beard and wears a dark olive turban. He's the director of United Sikhs, a human rights advocacy group — but he isn't related to Amardeep by blood; most Sikh men share the name of Singh.

Many Sikh men — and some women — also wear turbans, called dastaars, to cover their kesh, or uncut hair. Hardayal says the turban is meant to serve as a symbol of equality and justice, but at airports, turbans lead to extra scrutiny.

There's literally no way, no policy or screening method for us to go through that doesn't literally strip us of our dignity, each time.

For turban-wearing Sikhs, there are at least three levels of screening at security checkpoints. There's the metal detector, the hand wand and the "explosive trace detection" pat-down. That's where an officer or the passenger touches the turban, then gets their hands swabbed for traces of explosives.

If the TSA has further questions, the passenger may be asked to remove his or her turban for further inspection — the greatest insult, says Hansdeep Singh of the International Center for Advocates Against Discrimination.

"There's literally no way, no policy or screening method for us to go through that doesn't literally strip us of our dignity, each time," Hansdeep says.

"Oftentimes, when you're not making that initial complaint at the airport, you lose the motivation to file that complaint after time goes by," he says.

TSA: It's Not About The Turbans

It's not only Sikhs who face extra scrutiny. Across cultures, there are travelers who wear headwraps or bulky clothing. They say they get similar treatment.

Riley says the TSA must try to detect ever more sophisticated weapons — plastic explosives for instance — that can't be seen on x-rays. But he says the agency doesn't want to mistreat flyers.

"We're constantly working to improve our detection technology, our officer's training and TSA's capacity to make the travel experience not just more secure — although that's our focus — but also more convenient for passengers," Riley says.

While a lot of the evidence of profiling is anecdotal, the problem is that the TSA does not make a lot of its data public, says Bruce Schneier, chief technology officer at BT Managed Security Solutions. His company has advised the TSA in the past.

"We get less security when we profile," Schneier says, because it sends a signal to the bad guys about how not to look. "If we are profiling, we shouldn't do it. It's just doing security smarter."

To repair its relationship with passengers, Schneier says the TSA needs to be more transparent.

Meanwhile, FlyRights will be available for download on the iPhone and Android phones starting Monday.