Accessibility links
Help For The Economy? Not From Debt-Bound Grads In a little more than 10 years, the total amount of student loan debt in this country has doubled to more than $1 trillion. While soaring student debt won't likely start another banking crisis, the problem could slowly drag down future economic growth. 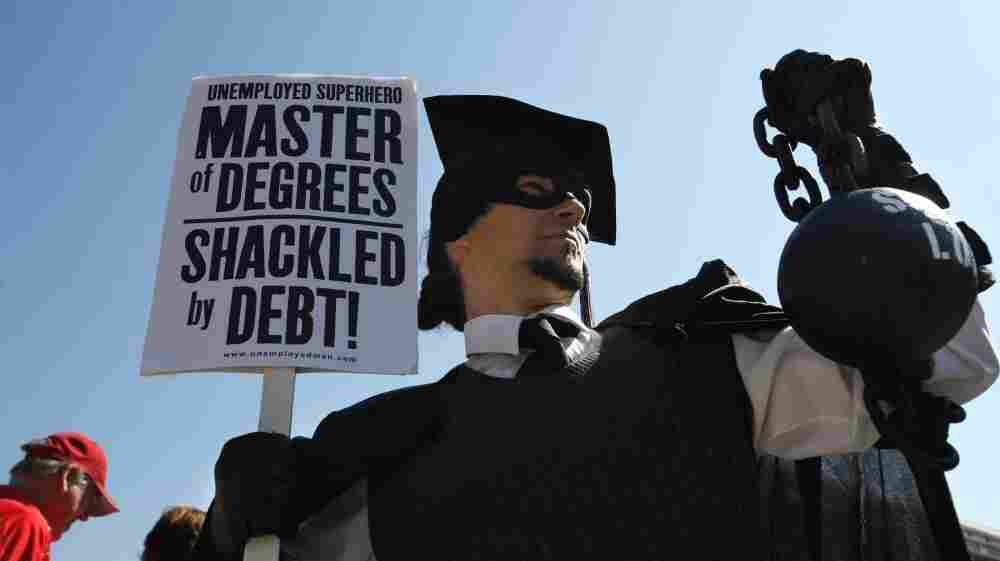 Gan Golan of Los Angeles, dressed as the "Master of Degrees," holds a ball and chain representing his college loan debt during Occupy D.C. activities in Washington. Average in-state tuition and fees at four-year public colleges rose an additional $631 this fall, or 8.3 percent, compared with a year ago. Jacquelyn Martin/AP hide caption 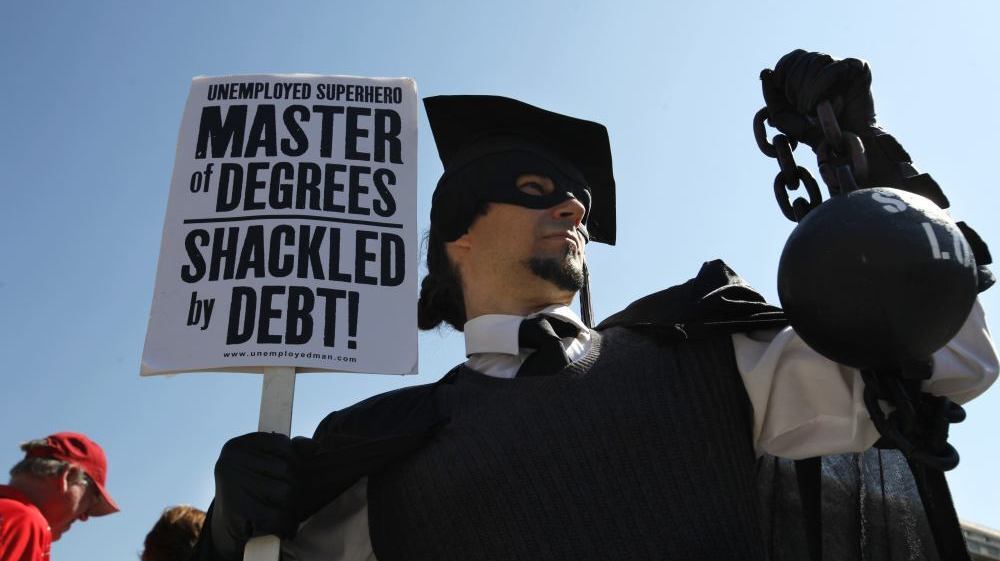 Gan Golan of Los Angeles, dressed as the "Master of Degrees," holds a ball and chain representing his college loan debt during Occupy D.C. activities in Washington. Average in-state tuition and fees at four-year public colleges rose an additional $631 this fall, or 8.3 percent, compared with a year ago.

On both television and at the University of North Carolina this week, President Obama made the case for keeping rates on student loans low. "The interest rates will double unless Congress acts by July 1," the president said.

On Friday, Congress did act, with a Republican bill that will keep interest rates on federal student loans at 3.4 percent. To finance it, Republicans would strip $6 billion from a program within the health care law — so President Obama says he'll veto it.

Even if the interest rates are kept low, the bigger program remains: What to do about the soaring costs of college and the related debt obligations that 40 million Americans now carry?

Americans like Josh Tisonyai, a 25-year-old recent graduate from Ohio State University. He owes $26,000 in student debt, which is around the average for college grads.

"I feel bad, I'm 25 [and] I'm still living with my mom," Tisonyai says. "I'm just trying to be optimistic, because I know a lot of other people are in my shoes too."

Many graduates are either jobless or underemployed like Tisonyai. He earns $600 a month working at a local radio station and as a substitute teacher, but his monthly loan payment is $450.

One problem some economists are pointing out is that students like Tisonyai and others saddled with debt, are unlikely to do things that benefit the overall economy anytime soon. That, in turn, could hurt long-term growth in the U.S.

The U.S. is at the point now where students are leaving college with both a degree and also thousands of dollars in crushing debt, but NPR's education correspondent Claudio Sanchez says this didn't happen overnight — in fact, it's been a 30-year process.

In trying to help students go to college, the federal government shifted away from grants toward loans, he says.

The surge in college enrollment, mostly of low-income minority students, has created a higher demand for the kind of aid the government provides. The grants many of those students are eligible for, Pell Grants, for instance, don't cover nearly as much as they used to, Sanchez says. Students are then forced to take out more loans — subsidized and unsubsidized as well as private and federal — to fund their education.

States have also, on average, cut higher education funding for public institutions by 24 percent, effectively increasing the cost of tuition. That cost is often passed on to the student, again creating a higher necessity for loans and aid to get a degree.

In the current economy, that degree still might not guarantee a job. The loan debt, however, is here to stay, Sanchez says.

"You have to pay this back," he says. "The government will come after you; they will garnish your wages, they will take your Social Security money ... you are in debt in perpetuity."

One solution was introduced last month by Rep. Hansen Clarke, a Democrat from Michigan. His plan, the Student Loan Forgiveness Act, has a simple, 10/10 formula: pay 10 percent of your salary toward those loans for 10 years and then, it will be forgiven. An immediate concern is the effect on taxpayers, but Clarke tells weekends on All Things Considered host Guy Raz that taxpayers are already on the hook.

"Right now, we're already paying the cost by not having jobs that could be created by our college graduates who are saddled with all of this debt," Clarke says.

To pay for it, Clarke says just a fraction of the money saved from the troop drawdowns in Iraq and Afghanistan could be redirected to help forgive the loans, money he says taxpayers are already spending.

"That's really in our nation's best interest," he says. "When people are not in debt, when they're being productive, that's how this country will become stronger."

Or, Helping By Not Helping At All

Not everyone agrees that keeping loan rates low is a good thing. According to Lindsey Burke, who writes about education for the conservative Heritage Foundation, the best way to check the skyrocketing costs of higher education would be to stop subsidizing student loans with lower interest rates.

She tells NPR's Raz that subsidized aid feeds a vicious cycle: The government gives out more money for college, so colleges charge more money to attend.

"We need to think about ways to ultimately reduce the college cost problem," Burke says. "We need to start moving toward more online learning options [and] really kind of pushing that bubble."

The idea isn't necessarily to make college loans more difficult to get, Burke says, but to get Washington out of the lending game so that decisions are made based on what the market dictates and the risk of students, rather than politics.