Accessibility links
Three-Minute Fiction: Last Night She closed the book, placed it on the table, and finally, decided to walk through the door. She struggled into her boots on the mat, pulled on her heavy coat, but did not fasten it, threw her scarf loosely around her neck and ventured outside. 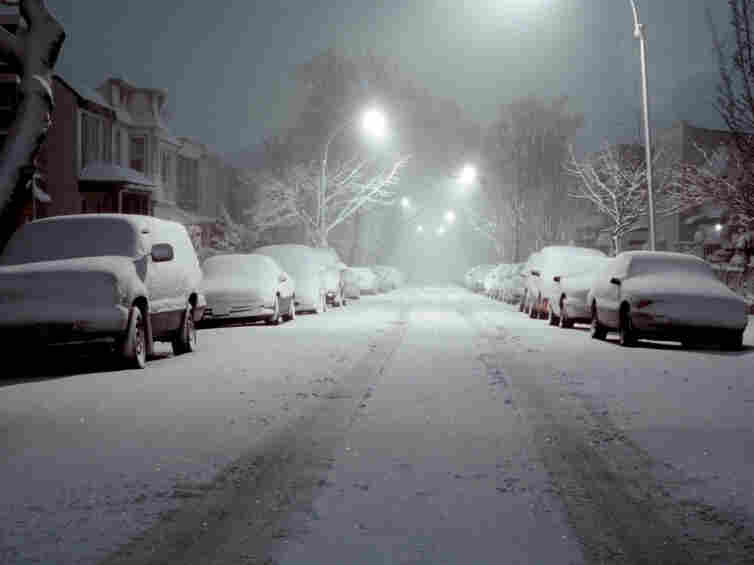 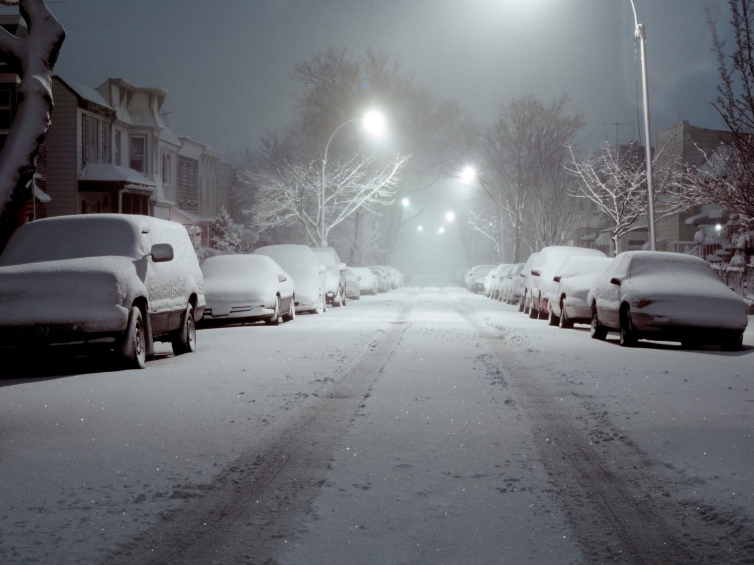 She closed the book, placed it on the table, and finally, decided to walk through the door. She struggled into her boots on the mat, pulled on her heavy coat, but did not fasten it, threw her scarf loosely around her neck and ventured outside.

On the front step, she shivered reflexively in the cold and looked around her neighborhood. A few late lights glowed from windows in houses down the street. In one, she could see the blinking blue of a television screen. Otherwise, the night was still and silent, and snow muffled faraway sounds: a distant plane in the sky, a car backfiring blocks away, trucks rumbling on the freeway three miles to the north.

How long had she lived on this same street, how many years from moving as a child to this ranch house in the '60s to this night as the year counted down in 2012?

Mrs. Waggoner, who died last year but stayed in her house until the end, had probably been there the longest. Her grown children had not sold her house yet, but the grass was cut and the snow was shoveled as though she were still there.

Mrs. Norton down the street had finally been revealed as a hoarder when she fell inside the house and broke her hip. She waited 10 hours before calling an ambulance, because she knew she would be found out and taken away.

The rest of the neighbors all had similar complaints — water in the basement, the city plows pushing snow back into the driveways — but those who had lived here for many years, as she had, were used to it. Things were familiar, stories were old but still repeated: like the time an old tugboat captain and his wife, a former nurse, had kept a pair of boxer dogs that would escape and rampage the neighborhood. They had treed her on her swing set once.

During the summer, when the windows were open, you could hear the captain saying sweet things — "darling," "beautiful girl," "honey" — but he was talking to the dogs, not to his wife, who had the bad habit of weeding in the morning wearing nothing but a sheer nightgown.

Mrs. Ingraham, who stood at her kitchen window doing the breakfast dishes, would try not to see the bent over form of her neighbor, with everything revealed in the early light.

Pulling her gloves on, she remembered when she had inadvertently raised pumpkins in the backyard — when the seeds from a jack-o-lantern had sprouted in the spring, sending muscular vines down the outside entrance to the basement and completely blocking the way until the pumpkins were harvested.

She thought of her father, who had tried to raise tomatoes along the side of the house, but planted too many and fertilized them every day, until they pulled down their stakes and grew across the lawn toward the neighbors.

She thought of the mated pair of wild ducks that came every year to be fed by her mother. They made one final appearance on Easter Sunday, when they were last seen walking up Crosby Street.

It was very late. She reached down under the mailbox and pulled the plug of the outdoor Christmas lights. The angels and deer figures blinked off; the fir trees became dark shapes. It was just four days before Christmas. She looked up into the sky and watched as lights flared in the sky and streaked slowly downward, spreading fire across the horizon.

The end, she thought, was almost too peaceful.