Accessibility links
Romney's Big-Dollar 'Bundlers' Stay Anonymous Since 2000, every presidential nominee has revealed the names of influential supporters known as "bundlers" who persuade others to give money to a candidate. But this year, Mitt Romney's campaign is not identifying its bundlers. 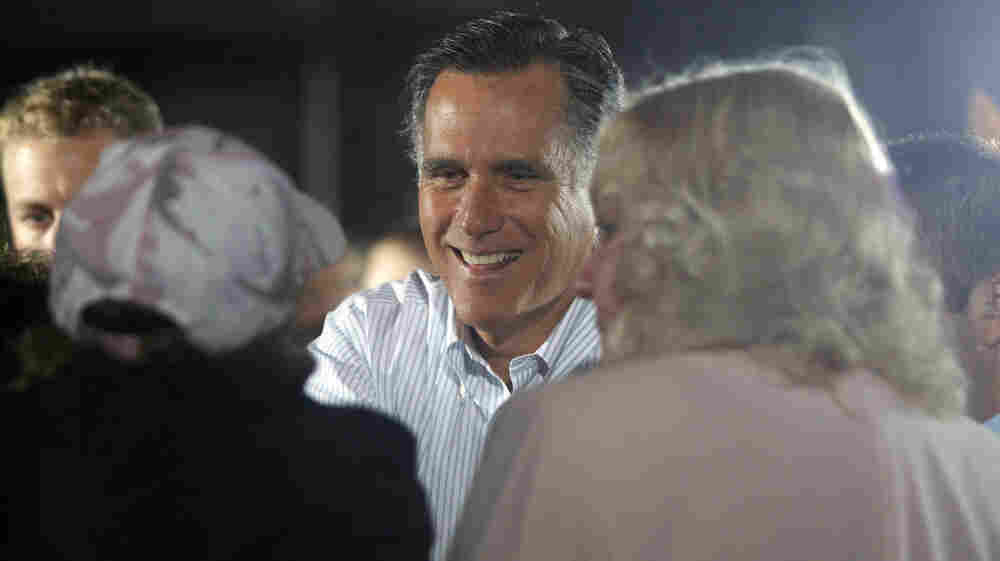 Every presidential nominee going back to 2000 has revealed the names of influential supporters known as "bundlers" because of the way they persuade others to give money to a candidate. Every nominee, that is, until Mitt Romney.

The most anyone can give directly to any presidential campaign is $5,000, and everyone who gives that much is listed in the Romney campaign's monthly disclosures.

When it comes to the bundlers, though, the campaign chooses to keep those names secret.

On one day last November, Mitt and Ann Romney had three different fundraising events in Florida. They ended up in Sarasota with 150 or so donors at the waterfront home of Bill and Christine Isaac.

"I would tell you that everyone was extremely impressed. I was," says Bill Isaac, who was chairman of the FDIC during the Reagan administration.

He says this year's race is his first foray into presidential politics. And he had never met Romney until that afternoon. The Romneys arrived, got some downtime at the house and then started mingling with the donors.

"It was an opportunity to see Mitt relaxed and really being himself," says Isaac.

The campaign disclosed all of the donors to the Federal Election Commission, as required by law. But Bill and Christine Isaac, who brought those contributions into the campaign — they weren't identified anywhere.

The Romney campaign says it complies with the law, period. And there's no law requiring disclosure of bundlers. It has just been the voluntary standard
since presidential candidate George W. Bush started doing it in 1999.

In 2008, Mitt Romney was among those adhering to the voluntary standard. But not this time.

Donors With A Past?

"The one danger is if Romney has a questionable bundler, you know, somebody with a troubled legal history," says Bill Allison, editorial director of the Sunlight Foundation, which advocates for transparency in government and politics.

Bundlers who carry political baggage have shown up along the campaign trail before — like Norman Hsu, a Ponzi scheme artist and onetime bundler for Hillary Clinton's 2008 campaign, or Jack Abramoff, the lobbyist who pleaded guilty to corruption charges after bundling for Bush in 2004.

"If that kind of story comes up, the question becomes about Romney is, 'Who are his other bundlers, and what is he hiding?' " says Allison.

And here's another reason to disclose: The public recognition can actually make the bundlers more enthusiastic and competitive.

The 2000 Bush campaign bragged about its "Pioneers" who each brought in $100,000 or more. And in 2008, candidate Barack Obama's organization
promoted online bundling among small donors.

The Obama campaign this year has more than 500 "volunteer fundraisers," as it calls them. Some bring in $500,000 or more. The campaign identifies them on its website.

But on the other side, there is rising interest in defending a bundler's right to stay anonymous.

"The cost of disclosure has been always, and it's inevitable, is that the publicity is sometimes unwanted," says John Samples of the libertarian Cato Institute.

He says the argument against disclosure may be stronger in today's vitriolic political climate. Still, he says he's surprised that Romney is withholding the names.

"It seems like leading with your jaw in the sense that the president will have an easy time of fitting this in with the theme of the rich and so forth," says Samples.

"I make it very clear that I'm a very strong supporter of Mitt Romney and I'm doing everything I can possibly do to help him be our next president," says Isaac.

He adds that he's happy to disclose that.