Accessibility links
From Minister To Atheist: A Story Of Losing Faith Teresa MacBain admits that when she was ordained as a minister, she had big questions. She thought they'd make her faith stronger, but instead they haunted her. Then one day, she couldn't take it anymore. In a move that's left her unemployed and nearly friendless, MacBain has come out as an atheist — and she says it's a big relief. 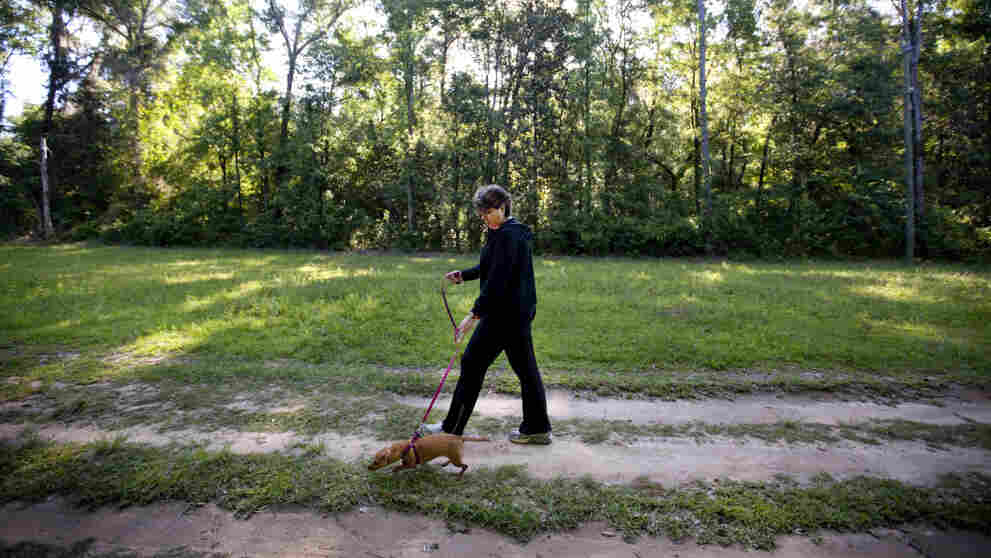 Teresa MacBain walks her dog, Gracie, at a park near her Tallahassee, Fla., home. After a lifetime in the church, MacBain came out as an atheist at an American Atheists' convention in Bethesda, Md. Colin Hackley for NPR hide caption 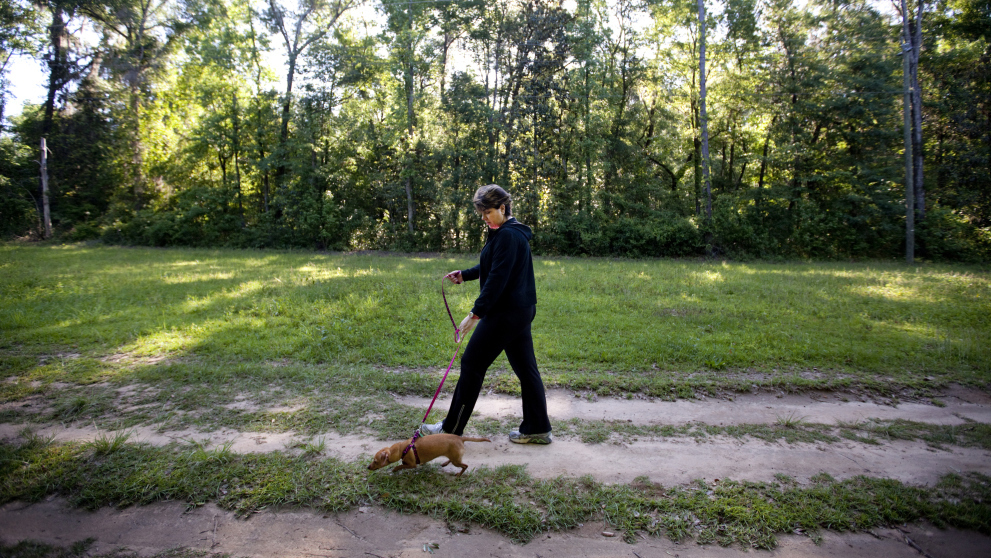 Teresa MacBain walks her dog, Gracie, at a park near her Tallahassee, Fla., home. After a lifetime in the church, MacBain came out as an atheist at an American Atheists' convention in Bethesda, Md.

This is the first in a series of stories on losing faith.

Teresa MacBain has a secret, one she's terrified to reveal.

"I'm currently an active pastor and I'm also an atheist," she says. "I live a double life. I feel pretty good on Monday, but by Thursday — when Sunday's right around the corner — I start having stomachaches, headaches, just knowing that I got to stand up and say things that I no longer believe in and portray myself in a way that's totally false."

MacBain glances nervously around the room. It's a Sunday, and normally she would be preaching at her church in Tallahassee, Fla. But here she is, sneaking away to the American Atheists' convention in Bethesda, Md.

Her secret is taking a toll, eating at her conscience as she goes about her pastoral duties week after week — two sermons every Sunday, singing hymns, praying for the sick when she doesn't believe in the God she's praying to. She has had no one to talk to, at least not in her Christian community, so her iPhone has become her confessor, where she records her private fears and frustrations.

"On my way to church again. Another Sunday. Man, this is getting worse," she tells her phone in one recording. "How did I get myself in this mess? Sometimes, I think to myself, if I could just go back a few years and not ask the questions and just be one of those sheep and blindly follow and not know the truth, it would be so much easier. I'd just keep my job. But I can't do that. I know it's a lie. I know it's false." 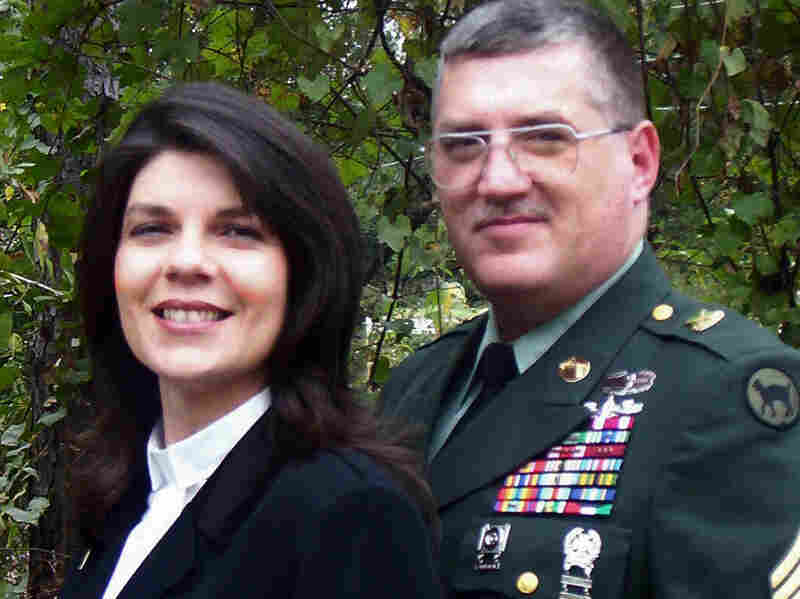 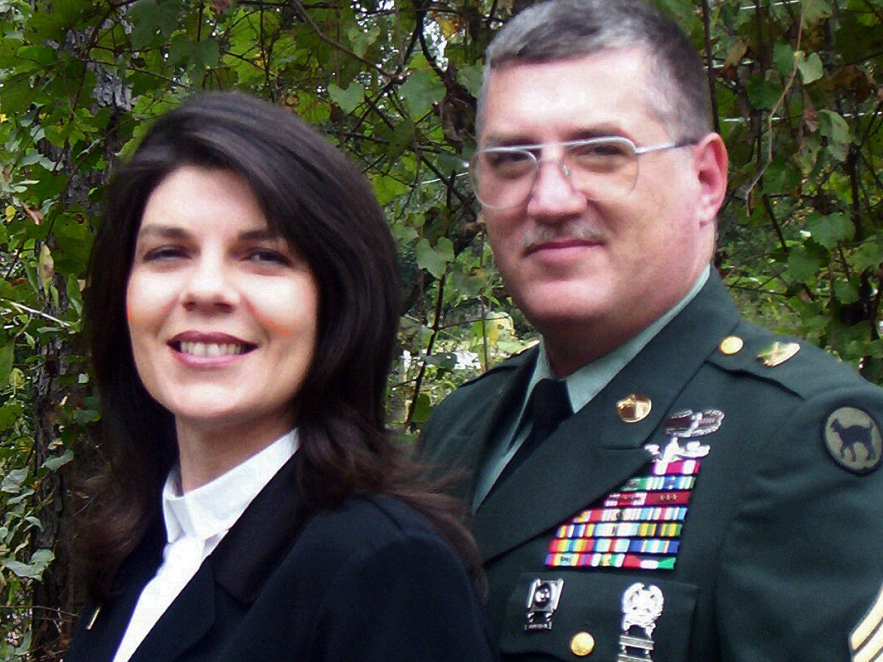 Teresa MacBain's husband, Ray MacBain, says he still believes in God but defends his wife's right not to.

MacBain made that recording in her car on the way to Lake Jackson United Methodist Church several weeks before the American Atheists' conference.

MacBain, 44, was raised a conservative Southern Baptist. Her dad was a pastor and she felt the call of God when she was 6. She had questions, of course, about conflicts in the Bible, for example, or the role of women. She says she sometimes felt she was serving a taskmaster of a God, whose standards she never quite met.

For years, MacBain set her concerns aside. But when she became a United Methodist pastor nine years ago, she started asking sharper questions. She thought they'd make her faith stronger.

"In reality," she says, "as I worked through them, I found that religion had so many holes in it, that I just progressed through stages where I couldn't believe it."

The questions haunted her: Is Jesus the only way to God? Would a loving God torment people for eternity? Is there any evidence of God at all? And one day, she crossed a line.

"I just kind of realized — I mean just a eureka moment, not an epiphany, a eureka moment — I'm an atheist," she says. "I don't believe. And in the moment that I uttered that word, I stumbled and choked on that word — atheist."

But it felt right.

About a year ago, MacBain found The Clergy Project, an anonymous online community of clergy who have lost their faith. Now she had allies, but no easy escape. She began applying for jobs, but when prospective employers asked why she wanted to leave the ministry, she didn't know what to say. She recorded her worries on her iPhone.

'When God Talks Back' To The Evangelical Community

'Woodstock For Atheists': A Moment For Nonbelievers

The Wisdom Of Faith: What Religion Can Teach Us

'Religion For Atheists': God, What Is He Good For?

"So what the hell am I supposed to do?" she asks in one recording, her voice sounding desperate. "Really, the options are work at something like Starbucks or McDonald's — and even there they're going to ask those questions. I could even clean houses and not make a great amount of money — but at least nobody would be asking me questions."

Driving to church on Sunday, March 18, MacBain realized she could no longer bear her double life.

"I got to come out. I got to get out of it," she told her phone. "It used to terrify me, what people's reaction would be. But it's been so long now and I've done this for so long, I don't even care."

The sermon she gave that day was her last.

The 'Freedom' Of Coming Out

On March 26, at the American Atheists' convention in Bethesda, MacBain seems almost giddy. The day before, she decided she would go before the conference's 1,500 or so nonbelievers and announce that she is officially an atheist.

"I am nervous," she says, "but at the same time I am so excited. I slept like a baby last night because I knew I wasn't going to have to live a lie anymore. Such freedom."

"My name is Teresa," she begins. "I'm a pastor currently serving a Methodist church — at least up to this point" — the audience laughs — "and I am an atheist."

Hundreds of people jump to their feet. They hoot and clap for more than a minute. MacBain then apologizes to them for being, as she put it, "a hater."

"I was the one on the right track, and you were the ones that were going to burn in hell," she says. "And I'm happy to say as I stand before you right now, I'm going to burn with you."

A few minutes later, MacBain strides off the stage into a waiting crowd. One man is crying as he tells her that her speech is "one of the most moving things I've seen in years." Another woman says she, too, had been a born-again Christian. "Join the club," she says as she hugs MacBain.

"I have never felt so appreciated and cared for, you know?" MacBain says later, noting that she has left one community — Christianity — for another. "New member, just been born — that's what it feels like." 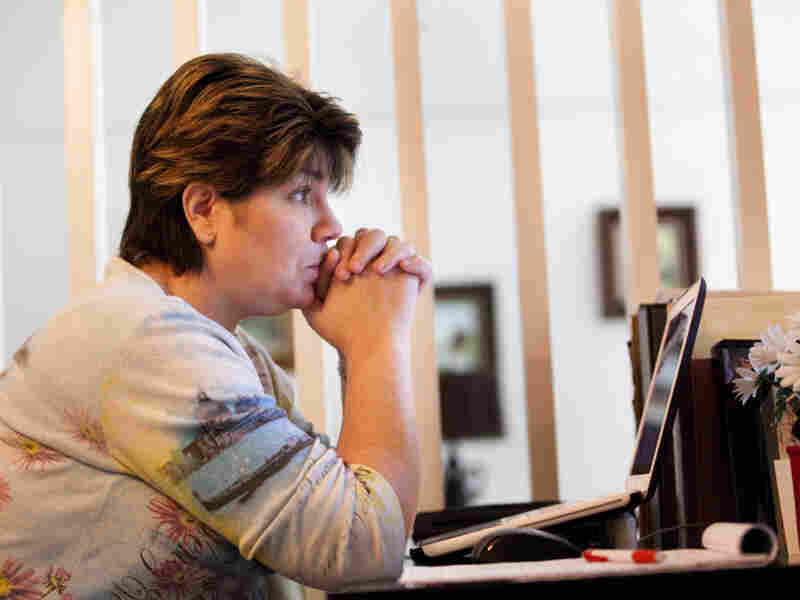 Teresa MacBain pauses while talking about her ongoing job search. She has been out of work since leaving her position as a Methodist pastor earlier this year. Colin Hackley for NPR hide caption 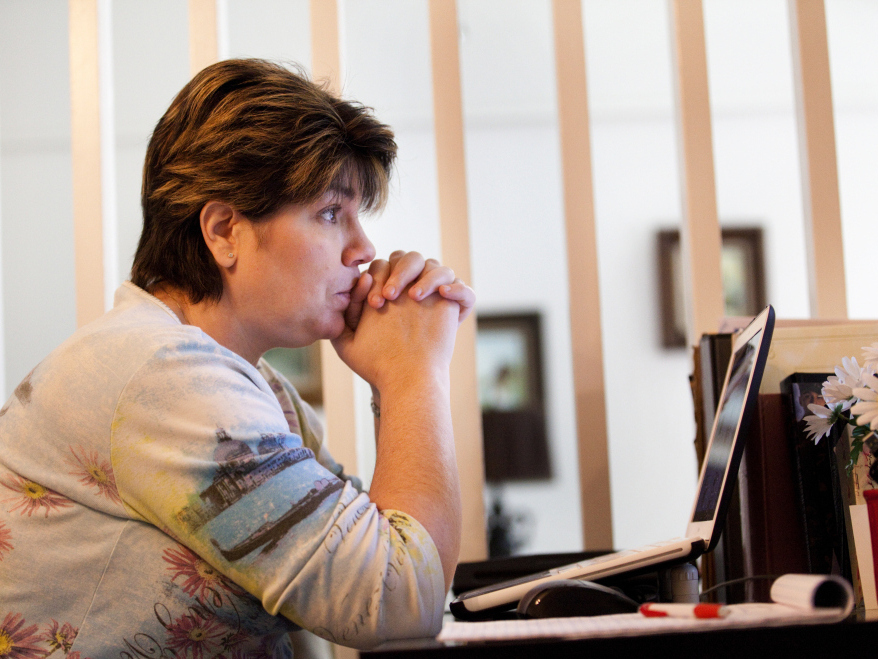 Teresa MacBain pauses while talking about her ongoing job search. She has been out of work since leaving her position as a Methodist pastor earlier this year.

Two days later, MacBain returned to Tallahassee — and to reality.

"I didn't know how far or how explosive her coming out would be, but, then again, nobody did," says MacBain's husband, Ray MacBain. "The next morning, we got up, I went to work and my son Alex texted me and said it went viral."

The local TV station, WCTV, ran a series of stories about MacBain, interviewing her boss but never MacBain herself. Hundreds of people wrote comments on the site, and MacBain says they were painful to read.

"The majority of them, to begin with, were pretty hateful," she says, although some nonbelievers soon came to her defense. "For somebody who's been a good guy their whole life and been a people pleaser, it's really hard to imagine that overnight you're the bad guy."

MacBain tried to see the church's district superintendent to explain, but he canceled the meeting. She was immediately locked out and replaced, so she flew out to Seattle to meet with her colleagues at The Clergy Project. There, sitting alone in her hotel room on Palm Sunday, MacBain again turned to her iPhone.

But MacBain did go home. People shunned her. Job interviews were canceled. The Humanists of Florida Association offered to pay her salary for a year, but there's no guarantee. Only two of MacBain's friends called her and took her to lunch. Meanwhile, her family was a refuge, even if they didn't all agree with her new views.

"I believe in God," says her husband, Ray. "And to be honest, I pray for her every night, I got friends praying for her."

But he says he adores his wife and defends her right to disbelieve. "That's why I spent 23 years in the Army. That's why I'm still a police officer. We have freedom of speech and freedom of thought. And God never forced anybody to believe, so who am I to step up?" 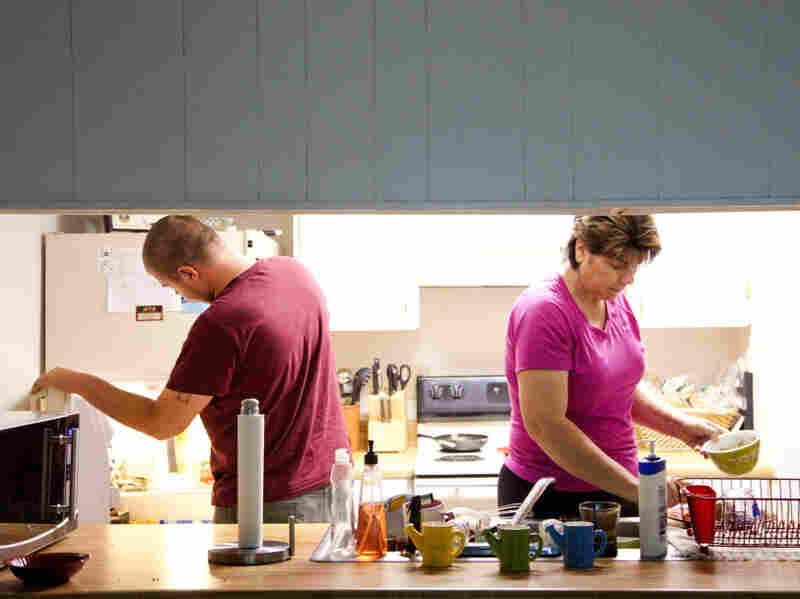 Teresa MacBain makes breakfast for her son David, 22, while he is home on leave from serving in the Army. MacBain says she is still adjusting to life outside the church. Colin Hackley for NPR hide caption 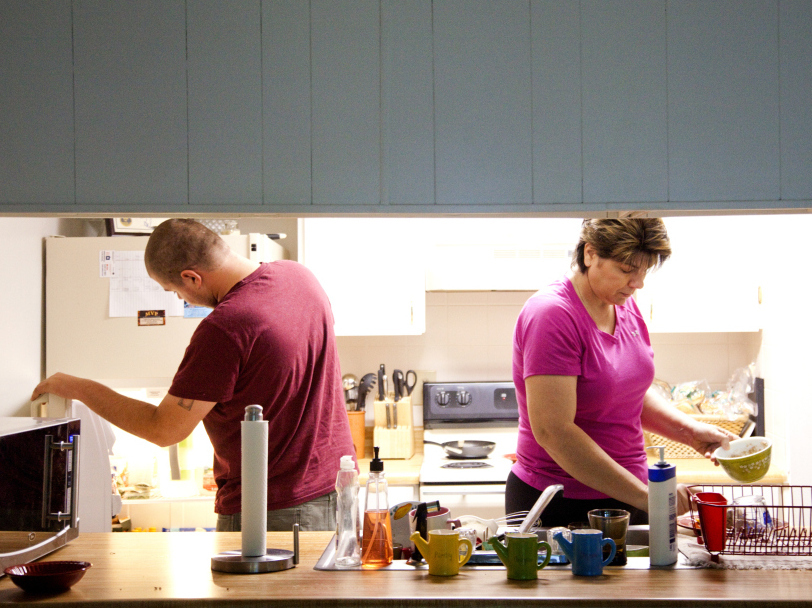 Teresa MacBain makes breakfast for her son David, 22, while he is home on leave from serving in the Army. MacBain says she is still adjusting to life outside the church.

A few minutes later, Teresa MacBain goes for a drive to the church at the center of her story. She says she has butterflies — this is the first time she's seen her church since she went public. Its 11:20 a.m., nearly time for the sermon. She's glad she's not inside.

"Not because of the people or anything," she says, "but because if I were in there, I know what I'd be doing. And that would be standing up and proclaiming something that I no longer believe in. So, yeah, I'm relieved that I don't have to do that."

Back at home, MacBain doesn't hesitate when she's asked what she misses most about her old life.

"I miss the music," she says. MacBain sang in church choirs and worship bands most of her life, and even though she no longer believes the words, she still catches herself singing praise songs.

She says she also misses the relationships — she'll often pick up the phone to call someone, then realize she can't. And she misses the ritual and regularity of church life.

When it's pointed out that she hasn't said whether or not she misses God, MacBain pauses.