Accessibility links
Peace, Justice Elude Rape Victims Of Bosnian War The courageous testimony of women who suffered sexual violence during the Bosnian War led to rape being recognized as a war crime under international law. But 20 years since the start of that war, thousands of Bosnian women continue to suffer the effects of rape while their attackers remain free. 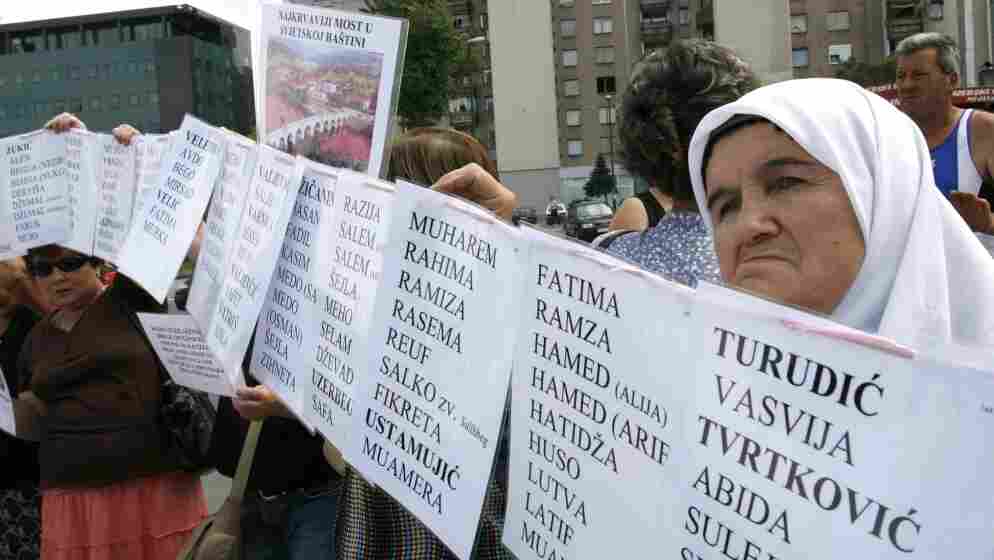 Bosnian Muslim women hold posters with the names of the missing during a protest at the U.N. office in Sarajevo in 2008. Hundreds of wartime rape victims were protesting the decision of the U.N. war crimes tribunal to reject the prosecution's request for rape charges to be added against two Bosnian Serbs who were on trial for other war crimes. Hidajet Delic/AP hide caption

Nearly two decades after the Bosnian War ended, thousands of Bosnian women who were victims of sexual violence are still seeking justice.

Sarajevo, the Bosnian capital, commemorated the 20th anniversary of the start of the war this month with a young people's choir performing John Lennon's song "Give Peace a Chance." Row after row of empty red chairs marked the more than 11,500 people who died during the siege of the capital.

This issue of rape victims is kept under wraps. This is still a traditional male-dominated society, and these victims are pushed into the shadows. People pretend they don't exist.

But there was no mention of the many thousands of women raped and tortured during the war. The fighting was triggered by Serbs — Bosnia's second-largest ethnic group — opposed to independence, and produced the worst atrocities in Europe since World War II, lasted nearly four years and killed 100,000 people.

Women have always been victims in warfare, but it was the result of the courageous testimony of Bosnia's sexually abused women that rape was recognized as a war crime under international law.

And yet, "a majority of those responsible for these crimes have not been prosecuted; they are still at large," says Elena Wasylew, one of the authors of "Old Crimes, Same Suffering," an Amnesty International report.

Only 40 cases have been prosecuted by the Yugoslav war crimes tribunal in The Hague and in local courts.

At the same time, Wasylew says, "the women who went through this suffering have received very little help from the government."

The exact number of victims is still unknown. No efforts have been made to create a database. Amnesty International estimates that there are several thousand victims.

But, Wasylew says, many have still not received medical help. Amnesty researchers visited local hospitals and clinics, and spoke with government officials, medical staff and psychiatric experts, as well as victims.

"And the findings were really striking," she says. "There is very little understanding still on the local level, very little awareness of the problem."

Vera Jovanovic, president of the Helsinki Committee in Bosnia-Herzegovina, a human rights organization, says it's not a lack of awareness, but the unwillingness of politicians in dealing with this issue.

"This issue of rape victims is kept under wraps. This is still a traditional male-dominated society, and these victims are pushed into the shadows," Jovanovic says. "People pretend they don't exist."

Precisely because of the stigma attached to rape, many victims have gone abroad, and those who stayed are reluctant to return to their homes, where the crime was perpetrated. But many rural women who work on the land have no choice, and thus have to live side by side with their torturers.

Search For Justice Goes On

In an effort to break the wall of silence, Amnesty International is making videos to try to help victims and their families cope with the continuing trauma.

Wasylew says one of the videos shows a husband who is supportive of his wife.

"He sent a message to all husbands and all of the men in Bosnia-Herzegovina, and he said, 'You have to stand by your wives, you have tell them, you have to tell everyone ... that this is a crime, you can't be ashamed of what happened,' " Wasylew says.

The man's voice and face were disguised — he lives in a small town and feared reprisals against his family.

The majority of victims surveyed by Amnesty are Muslims. But researchers say there are also Croat victims, as well as Serbs. But Serb authorities are in greater denial and even more reluctant to acknowledge the victims' existence, according to the report.

The important thing, Wasylew says, is bringing all the perpetrators to justice.

"But that's the problem — that victims don't have ethnicity, but in this country they do, and once you give them an ethnicity, it is impossible to talk of international justice," she says.

Two years ago, the Bosnian government promised to adopt new laws that would give victims reparations as well as justice, but nothing was done. And officials are reluctant to discuss the issue.

Amnesty hopes its latest report will spark international pressure on Bosnian authorities to finally rescue these women from their state of limbo.

Bosnia Remembers When The World Looked Away April 7, 2012
Two Decades After Siege, Sarajevo Still A City Divided April 5, 2012
A Look Back At Bosnia, Through Angelina Jolie's Eyes Jan. 19, 2012