Accessibility links
A Museum Teaches Tolerance Through Jim Crow Michigan's new Jim Crow Museum of Racist Memorabilia is using the ugliness of racism to teach a lesson of acceptance. "We are a resource that does the thing that many Americans don't want to do," says museum founder and curator David Pilgrim, "and that is to talk about race in a direct way." 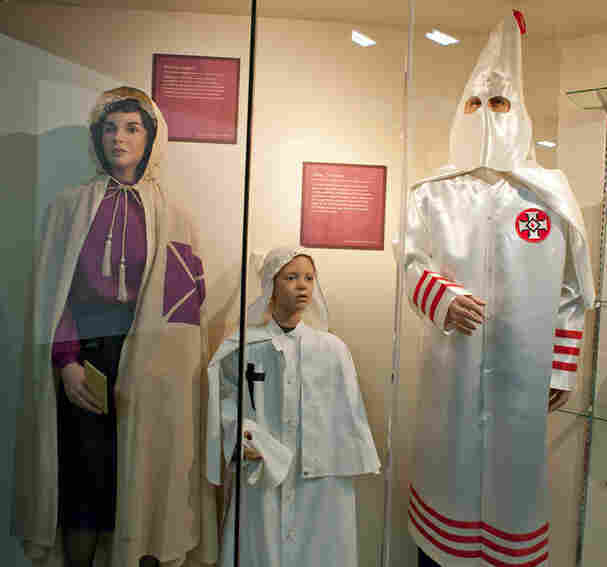 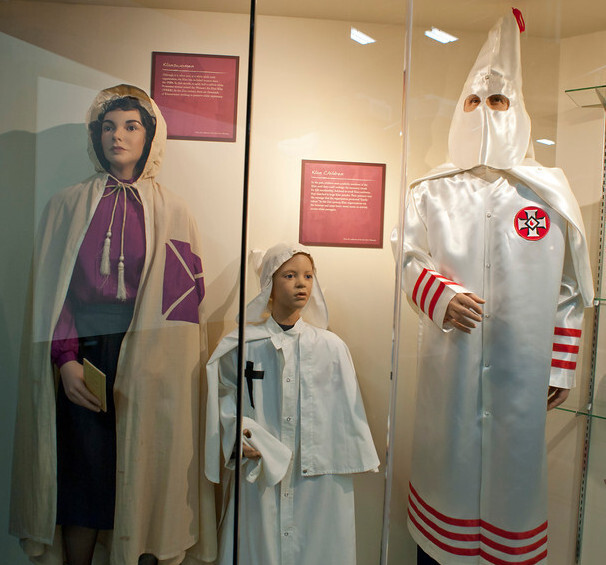 Museum displays include examples of robes worn by the men, women and children of the Ku Klux Klan.

The ugliness of racism is at the heart of a new museum in Michigan. The Jim Crow Museum of Racist Memorabilia at Ferris State University in Big Rapids features thousands of troubling artifacts and sometimes horrifying images. There are slave whips and chains; signs that once dictated where African-Americans could sit, walk or get a drink of water; and teddy bears turned into messengers of hate.

Andy Karafa, the museum's director, describes that last item: "It's this white little fluffy thing with a cute little red bow and this white T-shirt, and it reads 'I love niggers that are dead.' "

The items on display at the museum show a full range of American racial stereotypes and derogatory caricatures from the time. There are images of "mammies," "picaninnies," "sambos" and an entire section dedicated to the portrayal of black children as "alligator bait."

'We're Not A Shrine To Racism'

David Pilgrim, the museum's curator and founder, says the intention is not to traumatize, but to teach.

"If you hear about the museum, then you form opinions in the abstract, and that's very different from what happens with people that actually visit the facility," he says. "They really get it. They understand what it is. ... We're not a shrine to racism, any more so than a hospital is a shrine to disease." 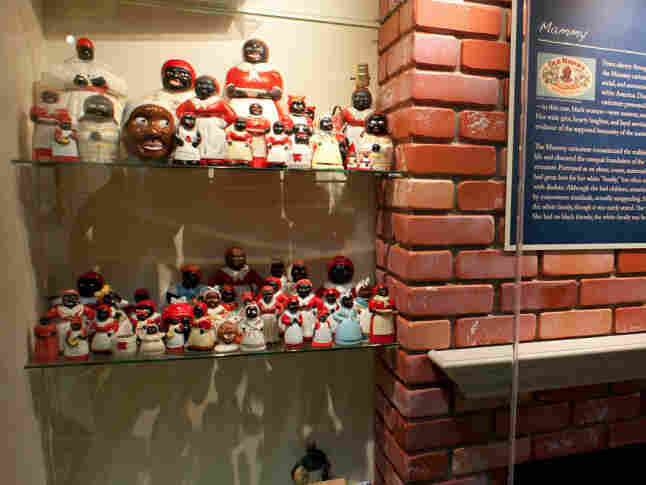 According to the museum, the Jim Crow era's "mammy" imagery presented the idea that black women were content — even happy — as slaves. Bill Bitzinger/Ferris State University hide caption 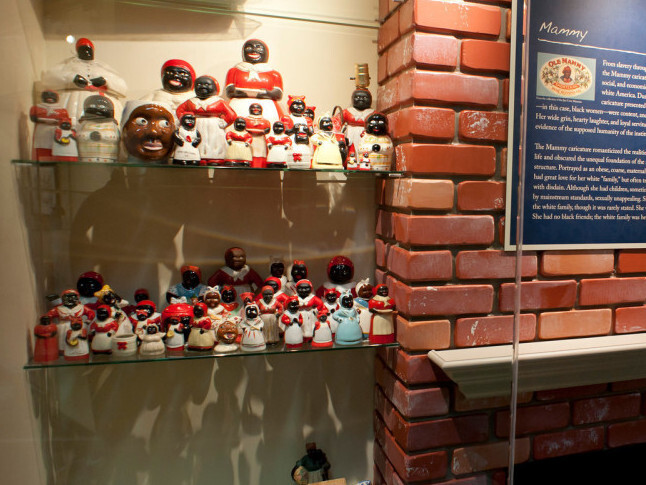 According to the museum, the Jim Crow era's "mammy" imagery presented the idea that black women were content — even happy — as slaves.

In the middle of the museum sits the toughest exhibit of all. It's on the violence of Jim Crow, and when you step inside, you're confronted with a replica of a lynching tree. There's a display of Ku Klux Klan robes — they had special robes for the women — and just to the left there's a video montage of African-Americans being beaten, hanged and burned.

Karafa explains why there's so much violence in the exhibit: "Jim Crow as a system wouldn't have worked without it — either actual violence or the threat of violence."

Visitors leaving the exhibit are visibly shaken. Rowena Hamel chokes up as she explains that she lived through the Jim Crow era in an all-white community in Michigan's Upper Peninsula.

"I can't believe that I'm 84 years old and didn't realize," she says. "I've learned so much today. How could I have not seen this? I must have just been blind to it."

A Way To Talk About Race

Pilgrim's goal in founding the museum has been to open people's eyes, hearts and minds to the reality of Jim Crow. It took eight years and more than $1 million to create a permanent home for his collection, a memorial of hate aimed at teaching tolerance.

"We are a resource that does the thing that many Americans don't want to do, and that is to talk about race in a direct way," Pilgrim says.

He continues to collect new items, many of them now aimed at President Obama, including posters that show the president being lynched.

"Unfortunately, it appears that there will always be new caricatures created and new caricature objects created," he says. "For us, they just become opportunities to teach."

Pilgrim says he was 12 or 13 years old when he bought his first racist object. He doesn't remember what it was, but he does remember that he hated it — he threw it on the ground and smashed it. Today, 9,000 hateful items later, he's seeking those ugly artifacts out for a bigger purpose.