Accessibility links
George Papandreou: Greece Had To Make Changes The former leader is from the most powerful family in Greek politics, the third man in his family to be prime minister. But Greece's debt crisis brought down his government, his party and his family's dominant role in running the country. 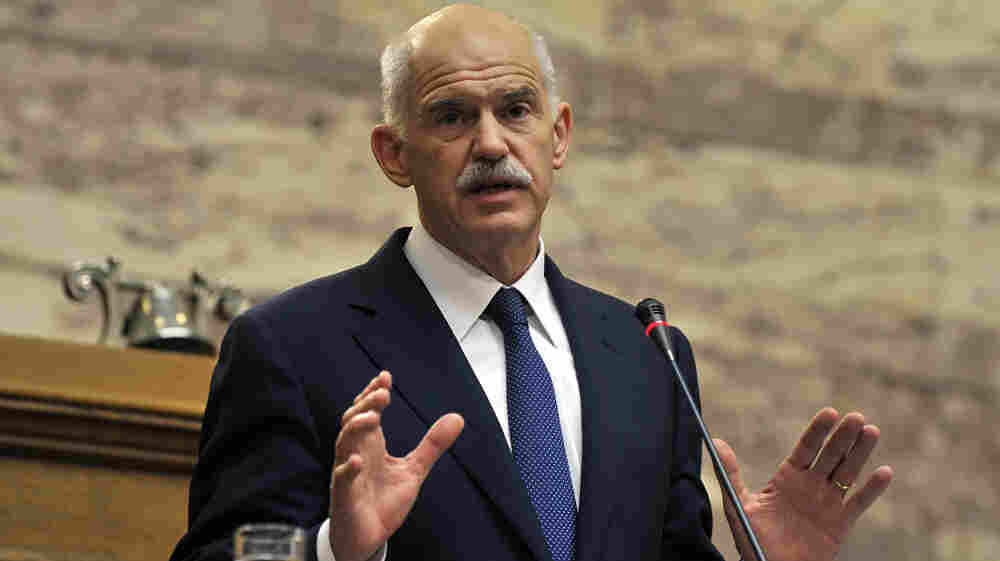 Europe's economic crisis has been driving leaders from power, one after another. Among those toppled was George Papandreou, who stepped down as the prime minister of Greece last November, just two years into his government's four-year term.

Many Greeks have harshly criticized him for agreeing to austerity measures in exchange for billions in international bailout loans. Just before he left office, Papandreou tried to build public support by asking for a referendum on the bailout and, by association, the euro. But the referendum never happened; terrified European Union leaders, as well as many Greeks, rejected that idea.

Recently, the 59-year-old American-born sociologist also stepped down as leader of PASOK, the Socialist party his father founded in 1974, after Greece returned to democracy following seven years of military rule.

The Papandreous, who are a bit like the Kennedys of Greece, have played a leading role in Greek politics for more than half a century. The debt crisis stalled this dynasty, at minimum. But Papandreou says he's at peace with his decisions.

"I was very conscious of the difficulties," he says. "I knew that these would not be popular. And I knew, sooner or later, I would be very much the target."

The debt crisis began in late 2009, shortly after Papandreou's government was sworn in after winning a landslide election. Papandreou says his government discovered a huge, undeclared debt left by the previous administration, led by the main opposition New Democracy Party. He says the country's deficit was more than double what New Democracy had reported.

After Papandreou's government revealed the debt, the markets went haywire. Greece could no longer borrow money and teetered on the verge of bankruptcy. That's when Papandreou asked for some $150 billion in bailout loans.

But the troika's cash came with very tough conditions — including severe wage and pension cuts, and tax hikes. The cuts have been tremendously painful for Greeks. The unemployment rate is now 21 percent — more than double what it was in 2009.

Angry anti-austerity protesters often march to Athens' Syntagma Square, which is across the street from Parliament. They say Papandreou gave the troika too much power. But Papandreou says the country had already lost much of its sovereignty before 2010.

"Yes, we have lost a lot of our capability to take autonomous decisions, but that wasn't because of the last two years. That is because of the dependence we had on borrowing money to sustain an economy that was not viable," he says.

Papandreou says he wanted to remake the state by tackling corruption.

"Greece has great strengths, but much of this potential has been wasted," he says. "That's because of a wider political system, but also because of a lack of an institutional framework. [There's also] a lack of transparency, a waste of resources. So we needed to change."

"I think he was right," Juncker recently told Greek journalist Alexis Papachelas. "And since then all kinds of initiatives have been taken to fight corruption. [That] has to be welcomed, of course."

Papandreou had specific initiatives in mind, such as reforming the tax system and putting government budgets online.

But the troika wanted much more, including downsizing Greece's huge and inefficient public sector.

"It was as if the troika asked the government to kill its own child, and of course, it couldn't," he says. "It didn't even know how to do it. So the government created a monster that was more powerful than the government itself."

But Papandreou says his government did make progress on reforms. He cites a recent report by the Organization for Economic Cooperation and Development that gives Greece top marks for its speed on making structural reforms.

And Papandreou says this effort is going to pay off, despite the pain the Greeks are sure to feel over the next few years. He says the European Union must avoid scapegoating and stick together to survive.

"Together we stand, divided we fall," Papandreou says. "We in Europe have great capacities. If you put all the European countries together, we are the biggest economy in the world. An economy like Greece's economy, which is 2 to 3 percent of the total GDP of the European Union, [that] can't be a problem we can't solve."

It's unclear who will be at the EU table for Greece after early elections this weekend. Polls show a country so divided that no party will get enough votes to govern.

Papandreou will be in the next Parliament. As a former prime minister, he's guaranteed a seat by law. He will represent Achaia, the district in southern Greece from which his famous family hails.