Accessibility links
Part 3: Discovering The True Cost Of At-Home Caregiving Few people want to turn over a loved one to institutional care. No matter how good the nursing home, it may seem cold and impersonal — and very expensive. But making the choice to provide care yourself is fraught with financial risks and personal sacrifices.

Walk through any nursing home, and your first thought might be: "I need to take care of Mom myself."

Few people want to turn over a loved one to institutional care. No matter how good the nursing home, it may seem cold and impersonal — and very expensive. But making the choice to provide care yourself is fraught with financial risks and personal sacrifices.

Those who become full-time caregivers often look back and wish they had taken the time to better understand the financial position they would be getting themselves into.

"I used to hear about people saying, 'Oh you know, we've got to put our parents in a home; we can't deal with it anymore,' " said Yolanda Hunter, 43, a Maryland resident who is struggling with her decision to drop out of the human resources field to become a full-time caregiver for her grandmother. "And I used to think: 'Oh, how cruel are you?'

"You know, but now? I understand," she said.

Hunter belongs to one of three families being profiled in NPR's eight-week series, Family Matters: The Money Squeeze, which airs each Tuesday on Morning Edition. Each family is struggling with how to afford care for an older generation. The do-it-yourself approach is both common and costly.

Caregiver advocacy groups say Congress needs to be doing more with tax credits and Social Security benefits to help financially support those who choose to care for the elderly.

The Cost Of Elder Care

Adults have been providing an increasing percentage of financial assistance to their parents in recent years. Below are the national average annual costs and daily rates paid for various types of adult care.

The demands for such assistance may grow louder, given the demographic changes coming in our aging society.

Nearly 10 million people over the age of 50 are caring for their aging parents, according to a study conducted by the MetLife Mature Market Institute, in conjunction with the National Alliance for Caregiving and the New York Medical College. The number of caregivers has more than tripled over the past 15 years.

That increase reflects medical advances and the resulting increase in human longevity. As the average age of death has moved from 68 in 1950 to nearly 79 now, the ranks of the elderly have grown. Today, about 6 million U.S. residents are over 85.

As a result, the personal cost of caring for the elderly at home is rising — in terms of lost wages and diminished pension and Social Security benefits, the MetLife study concluded.

Studies estimate that 2 out of 3 informal caregivers are women, many of whom are middle-aged mothers with children or adult children living in their households.

The cost of putting a parent into professional assisted-living care can be daunting. MetLife says that kind of care averages about $42,000 a year. A private room in a nursing home averages more than $87,000. But the cost of keeping a relative at home can be very high too.

The MetLife report said that for the typical woman, the lost wages due to dropping out of the labor force because of adult caregiving responsibilities averages nearly $143,000. That figure reflects the wages lost while not working — typically for about five years — as well as lower wages after returning to the workforce with rusty skills. When foregone pension and Social Security benefits are counted, the out-of-pocket losses roughly double.

"Family caregivers are themselves aging and yet are providing care at a time when they also need to plan and save for their own retirement," MetLife said. The people who drop out of the workforce "can jeopardize their future financial security," the study concluded.

Hunter has discovered just that. She quit her job to become an in-home helper for her 89-year-old grandmother, Ida Christian, who has Alzheimer's disease. Christian lives with her daughter, Geneva Hunter, 66, who runs secretarial operations at a Washington, D.C., law firm. Yolanda Hunter has an apartment a few minutes away from her mother and grandmother. 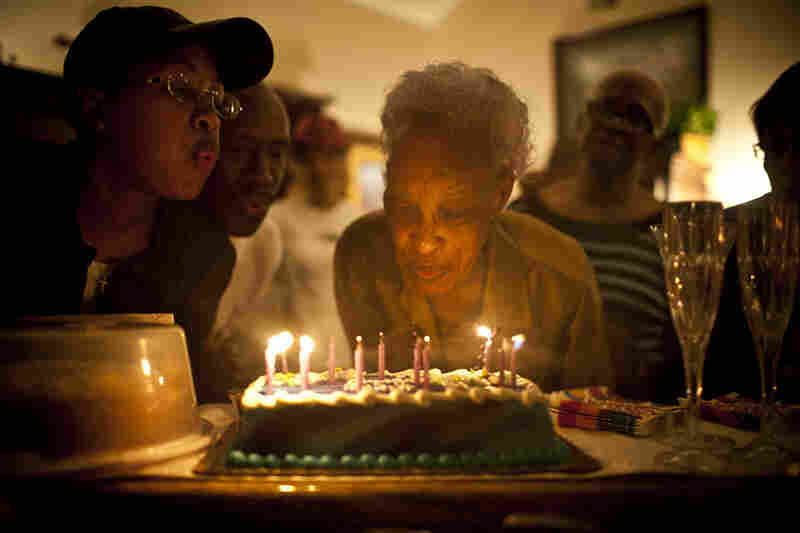 Ida Christian gets help from her granddaughter, Yolanda Hunter (left), in blowing out the candles on the cake celebrating her 89th birthday. Kainaz Amaria/NPR hide caption 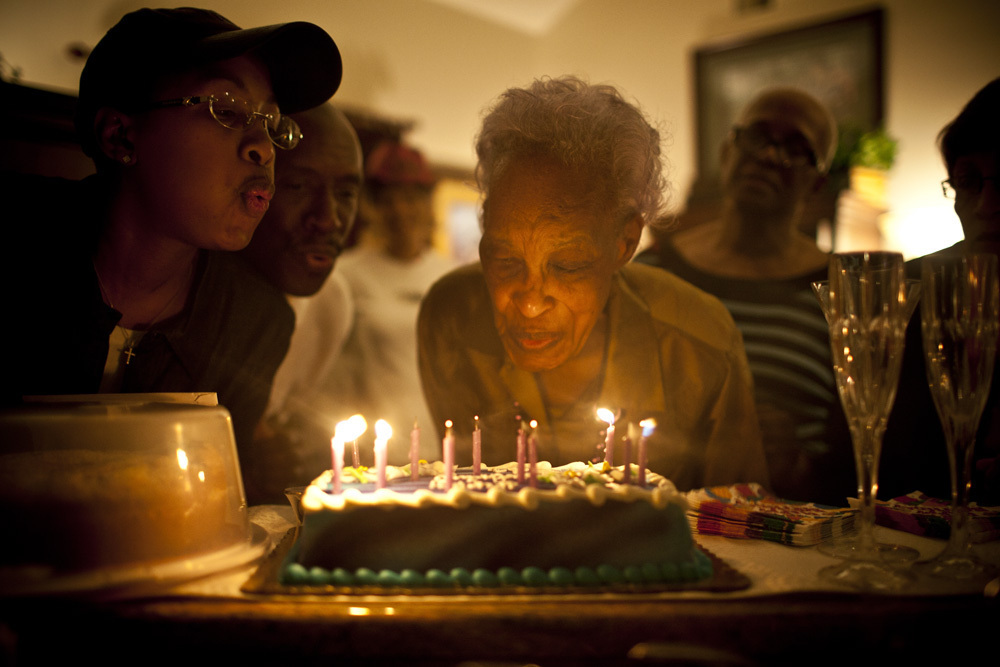 Ida Christian gets help from her granddaughter, Yolanda Hunter (left), in blowing out the candles on the cake celebrating her 89th birthday.

Like many other caregivers, Yolanda Hunter thought the "job" of watching over her grandmother would not last all that long. Her thoughts at the time she quit her job: "I can do this for a year, help settle things down, try and take the pressure off a little bit," she said.

Her goal was to find a good home nursing aide to help her grandmother so that she could jump back into the workforce. But two-and-a-half years later, it "didn't quite work out that way," she says.

Although Christian's savings are enough to provide a modest salary for her granddaughter, the amount is not great enough to allow Hunter to prepare for her own retirement.

So Hunter had to switch gears again and begin trying to re-enter the labor market at a time when nearly 13 million other people also were seeking work.

As this year began, she said she recognized that "I desperately want to get back to work, because I'm mentally tired and I feel — unless I win the lottery — I feel like I'm missing out on so much in terms of my future and making sure I have a stable future."

But then again, "there's that part of me that is very, very torn about leaving her, because no matter how compassionate the next person may be, they're not going to do the extra things that you're going to do," she said.

Some women's groups say Congress should expand tax credits available to people with dependent relatives and create "caregiving credits" to limit the Social Security penalty for time spent out of the labor force to provide family care.

The Caregiver Credit Campaign, an advocacy effort, says such help is warranted because without voluntary caregivers, "hundreds of billions of government dollars would be spent on alternatives like institutions."

Meryl Comer, president of the Geoffrey Beene Foundation Alzheimer's Initiative, knows about the financial penalties of caregiving. At age 50, she was a journalist, living in a Maryland suburb outside of Washington, D.C. Then her husband, age 58 at the time, was stricken with early-onset Alzheimer's.

She quit her job to become his at-home caregiver. Then her mother got Alzheimer's too. Now, 18 years after quitting her outside-the-home job, she continues to care for her husband and elderly mother.

She argues that corporations should do more to help their employees handle adult-care needs while staying on the job.

"How do we do provide flex time for people who are taking care of their parents?" she asked. "The human resources policies [for caring for the elderly] need to mirror the child-care policies," she said. "If corporations want women to be productive in the workforce, they have to make some accommodations," such as allowing them more flexible schedules, family-leave time and telecommuting opportunities.

Comer said corporations have come a long way over the past 30 years in terms of responding to the needs of working mothers with young children. "Now they have to do the same for the other end of the age spectrum," she said.