Accessibility links
Economy Puts Value Of Liberal Arts Under Scrutiny Small, private liberal arts colleges are looking at changing economic realities and beginning to worry about how they will survive. Small classes and close relationships with faculty mean high tuition. And it's tough to defend the value of English and philosophy degrees in a tight job market. 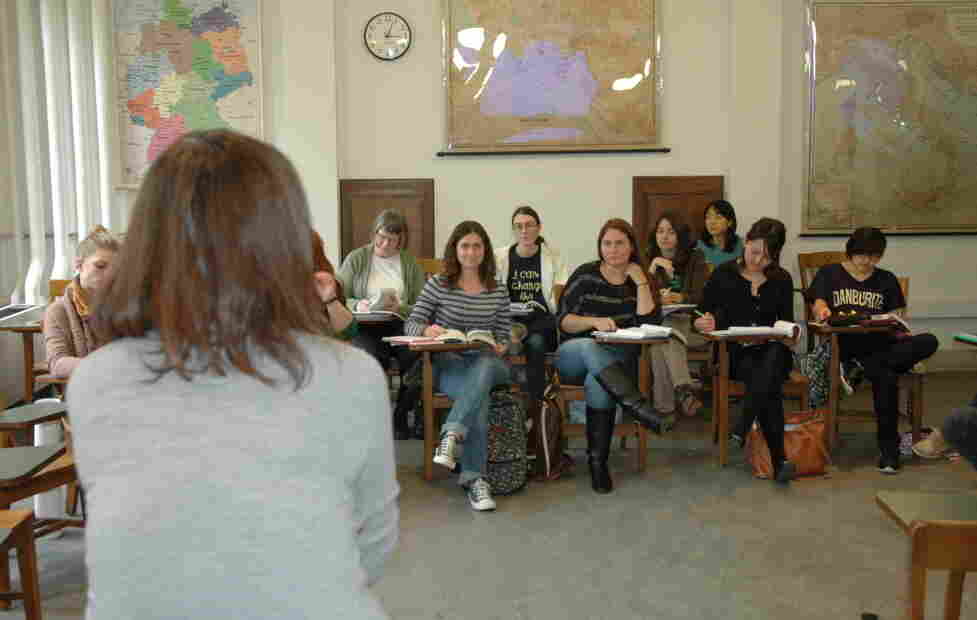 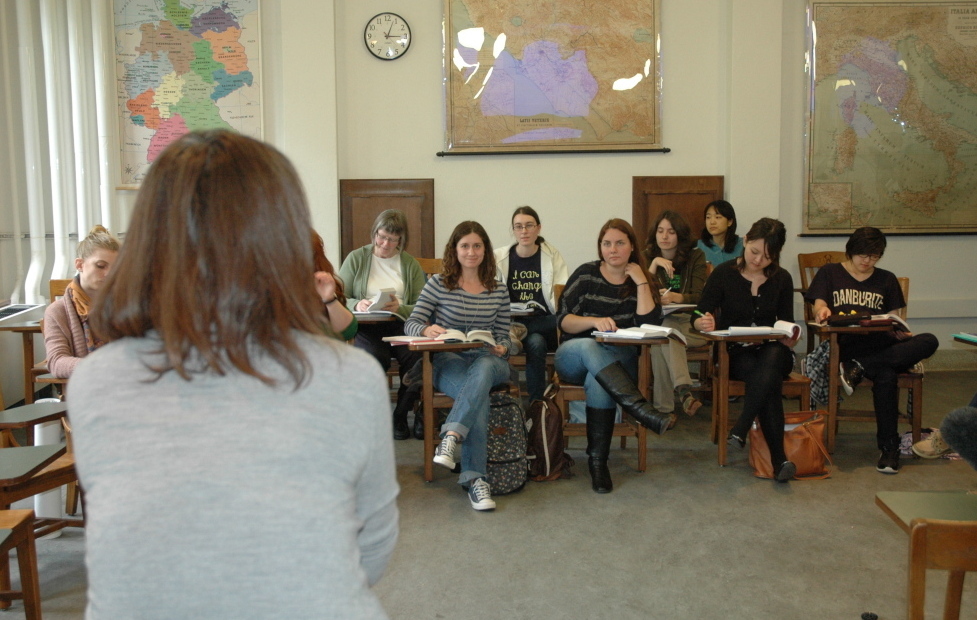 Wellesley College English professor Yoon Lee teaches a class on the rise of the novel.

As high school seniors wrestle with big decisions before Tuesday's deadline about which college they want to go to, some of the nation's top liberal arts colleges are dealing with big decisions of their own. Many of the most elite private schools are trying to figure out how they may have to adapt at a time when they're seen as a more expensive — and less direct — path to landing a job.

Liberal arts schools have long had a rap of being a kind of luxury, where learning is for learning's sake, and not because understanding Aristotle will come in handy on the job one day. But economic pressures and changes in the world of higher education have now put them more on the defensive than ever.

"There's been a lot of hand-wringing for a long time about the relevance of a liberal arts education, but I think those worries have heightened over the last couple years," says Bowdoin College President Barry Mills.

There's been a lot of hand-wringing for a long time about the relevance of a liberal arts education, but I think those worries have heightened over the last couple years.

The worries are both existential and financial. Even the most wealthy and well-established liberal arts schools are concerned about how they can afford to keep offering the same small, intimate classroom experience and low faculty-student ratios that they are known for.

At Wellesley College, for example, an English lit class where just a dozen students can hash out the character development in a novel is typical. Even a macroeconomics class has just six students and plenty of discussion.

But it is, by definition, enormously expensive. More than two-thirds of Wellesley's budget goes to faculty, and schools like Wellesley can't just increase efficiency by making classes bigger or putting lectures online.

"There is a fairly widespread anxiety about the financial viability of our model. The personalized, very labor-intensive instruction that we offer, the rising tuition that will be hard to sustain in the future," says Wellesley Provost Andy Shennan. "I don't think anybody is complacent about that issue."

"We don't want to stop being who we are," says Williams College President Adam Falk. As he sees it, technology may offer opportunities — for example, allowing colleges to collaborate with other campuses to offer a more specialized course — but he says it won't actually offer savings. He points to research done recently by College of William and Mary economists David Feldman and Robert Archibald suggesting that liberal arts colleges are kind of like the dentist.

"They show that it's very, very similar," Falk says. "You can't get dental services without going to a dentist. And that dentist can't be replaced by computer; that dentist can't do two people at once. Technology has made dentistry much, much better, but it hasn't changed the cost of dentistry."

Some top-tier liberal arts schools that are now feeling the pressure, however, are starting to challenge that conventional wisdom. As other colleges and universities have already done, they are starting to experiment with putting some lectures online. Vassar College, for example, will soon start posting lectures in just a handful of intro level classes.

"Some of the tests suggest that a faculty member can accomplish the same objectives in less time, so that means that they could teach more students in a given semester without sacrificing quality," Vassar President Catharine Hill says.

The growing cost of financial aid is also a big concern. These elite schools typically have more kids on campus with grants and loans than those paying full sticker price, so colleges end up collecting just about half of what they charge. Even schools with big endowments worry about how they can afford to keep offering such discounts, but with liberal arts schools insisting that diversity is as important to the educational experience they offer, they also can't afford not to.

"It's a terrible pressure, because our commitment is to access from every economic walk of life," Falk says.

On top of it all, liberal arts colleges are spending more time and money responding to parents' concerns about how their little philosophy majors will ever be able to land a job.

"There's a joke around here that a lot of our students double major," Shennan says. "They have one major for their parents, and one for themselves."

At Wellesley, as at most liberal arts colleges, campus tours focus heavily on how the school helps students find internships and eventually paying jobs. Wellesley is also adapting by adding a class in public speaking, for example — a little more pre-professional than liberal-artsy. Other colleges are adding new majors, such as business, but that may be more about packaging than content.

There's a joke around here that a lot of our students double major. They have one major for their parents, and one for themselves.

Shennan says a liberal arts education that teaches kids lifelong skills of how to think and how to be adaptable in whatever job they end up doing is actually more important now than ever.

"We are not giving up in any way on the basic beliefs that we have about the long-term value of a liberal arts education," Shennan says. "But we also don't have our heads in the sand, and I think we have to continue to make the case as persuasively as we can."

Sometimes that just means connecting the dots for parents. Most of the top liberal arts schools are now highlighting on their websites, in mailings, in person — any way they can — all their happy stories of alumni who are gainfully employed.

For these elite colleges, the challenge is to get parents to focus on the return on investment more than price.

Indeed, in the world of the most prestigious liberal arts schools, price is also a point of pride and a factor in college rankings. No one is driving up costs to move up a rank on the U.S. News and World Report, Mills says, but when spending per student is seen as an indicator of quality, none of these elite schools wants to be known for being cheap, either.