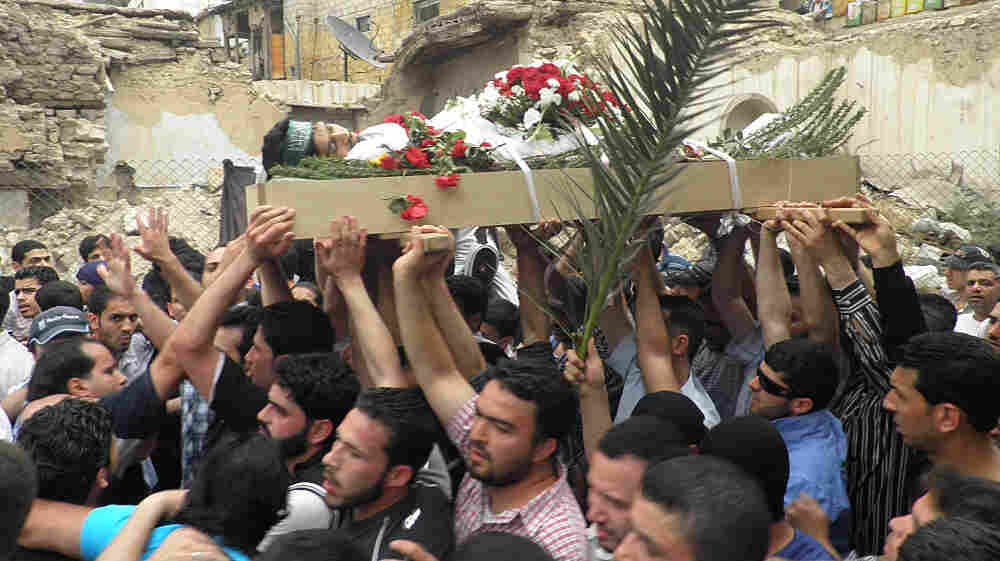 Mourners carry the body of activist Nour Hatem Zahra, 23, during his funeral procession, in Damascus, Syria, on Monday. Friends and fellow activists say Zahra, who posted anti-government graffiti all around the Syrian capital, bled to death after being shot by Syrian security forces on Sunday. AP hide caption

They called him "the spray man" for his graffiti that appeared all over the Syrian capital of Damascus. But in truth, 23-year-old Nour Hatem Zahra was an activist like any other activist.

He started protesting in Syria last spring. Back then, the opposition thought it would only take a few months to get rid of President Bashar Assad, as it had in Tunisia and Egypt.

Then Syrian forces started killing protesters, detaining them, torturing them. And the people started fighting back.

But still, there was Nour Hatem Zahra and his friends — organizing protests, hiding activists from the dreaded security forces, ferrying medical supplies to those who were injured but terrified to go to a government hospital. 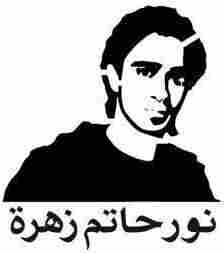 Zahra was an anti-government activist and graffiti artist in Syria. He and his friends spray-painted slogans against President Bashar Assad around the suburbs of Damascus, the Syrian capital. Courtesy of friends of Nour Hatem Zahra hide caption

Then late last year, Zahra got caught. Under torture, one of his friends had given up his name. Zahra later forgave the friend.

He was locked up for 56 days. As soon as he got out, he was at it again. He and his friends went around spraying the suburbs of Syria's capital, Damascus, with slogans against the Syrian president: "Down with the traitor." "To the trash heap of history." Pictures of the president with the word "pig" scrawled underneath.

A few weeks ago, Zahra and his friends declared "Freedom Graffiti Week." The Facebook page calls their work a mix of civil disobedience and peaceful expression.

On April 29, Zahra was going from neighborhood to neighborhood with his spray paint, jumping from car to car. He sped through a checkpoint for fear of being discovered. Security forces shot him in the leg.

His friends and fellow activists say he bled to death. He was later filmed on a dark stairwell, his body stiff, his eyes still open. They called him a martyr. The body was washed, shrouded in white and covered with flowers.

Video of the funeral posted online shows that mourners came by the hundreds to the funeral. They carried palm fronds and danced around the ones who held his body aloft. Most of them were young men in skinny jeans and baseball hats. They sang prayers for Zahra and his family.

"Mother of the martyr," they said. "We are your children now."

Just beyond the crowd, there's a handful of thugs carrying very large guns. They're not wearing uniforms, but they work for the government. But for the guns, they look like the men at the funeral.

Then, like so many of the amateur videos coming out of Syria, the footage of Zahra's funeral just stops.

The next day, there's another one: another funeral, another boy covered in flowers, another video.