Accessibility links
Movie Review - 'Last Call At The Oasis' A documentary following water activists including Erin Brockovich focuses on industrial and agricultural pollution and the drying of the Southwest. Critic Mark Jenkins says the film has a weakness for cutesy touches, but serves as a decent introduction to water issues in the United States.

For Americans' Water, It's 'Last Call At The Oasis'

For Americans' Water, It's 'Last Call At The Oasis' 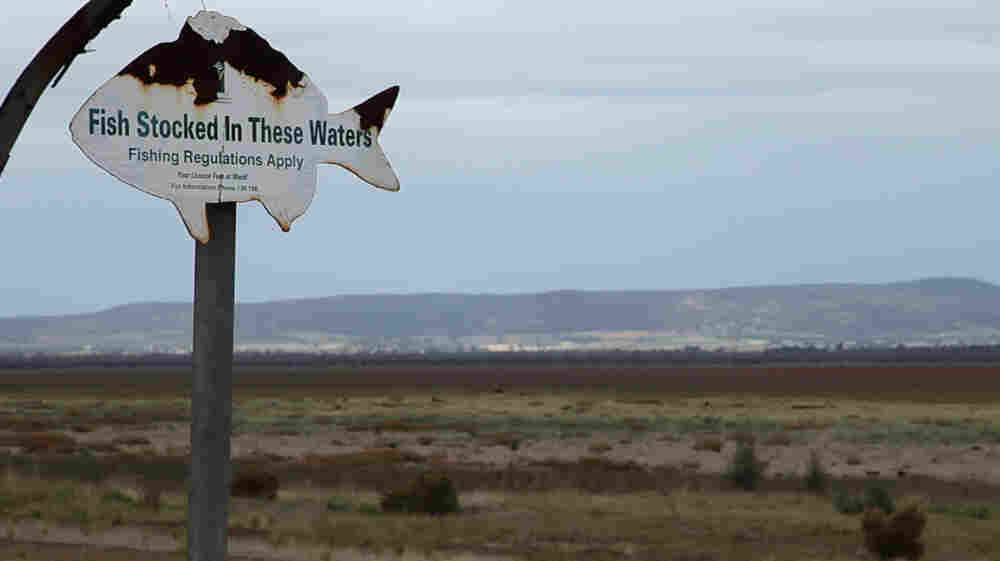 In building its case for the need to address flaws in current water management practices, the documentary Last Call at the Oasis shows the negative effects of such systems on communities, including this dry lake in Australia. Participant Media hide caption

Last Call At The Oasis

Eco-aware filmgoers won't learn much from Last Call at the Oasis, which follows the paths of such well-known water activists as Erin Brockovich. But writer-director Jessica Yu's documentary may be slick enough to reach people who aren't already familiar with such substances as "new water," atrazine and hexavalent chromium.

Inspired by Alex Prud'homme's book The Ripple Effect: The Fate of Fresh Water in the 21st Century, the movie sometimes widens its view to encompass the whole planet. But it emphasizes the United States, focusing on industrial and agricultural pollution and the drying of the Southwest.

In fact, even a trip to drought-ravaged Australia serves primarily to underscore the plights of Nevada (especially Las Vegas, where the emptying of Lake Mead threatens to shut off both the water and the lights) and California (especially the Central Valley, which uses a dwindling water supply to grow 25 percent of the food Americans eat). And Singapore's reliance on "recycled" or "new" water — that is, treated sewage — leads to a discussion of American reluctance to drink a similar product. (Although our astronauts do.)

Several of the chapters turn on a single individual. University of California, Berkeley, biologist Tyrone Hayes explains the effects of atrazine, an herbicide that may cause human birth defects and is banned in Europe, although it's made by a Swiss company. Michigan farmer and "water sentinel" Lynn Henning leads a tour of the cow-manure lagoons that are poisoning watersheds in the upper Midwest.

And Brockovich teaches rural communities about the carcinogenic properties of hexavalent chromium — the same toxin her counterpart battled in a fictionalized 2000 movie. One of Brockovich's stops is Midland, Texas, the spiritual hometown of George W. Bush and Dick Cheney. It's among the localities affected by "the Halliburton loophole," an exemption from EPA regulation reportedly secured by Cheney, the company's former CEO.

Documenting the battles over potable water inevitably leads to such politically charged territory. Yet the movie often skirts controversy. It mentions global climate change only in passing and doesn't directly criticize the EPA — although several of its interviewees do.

Last Call at the Oasis was produced by Participant Media, whose previous projects include the simplistic An Inconvenient Truth and Waiting for Superman. Like those movies, this one has a weakness for cutesy touches, including clips from gee-whiz mid-20th-century industrial films: We see a Disney-like account of a water drop's cycle of existence, along with a paean to the Hoover Dam (which will stop generating electricity in four years if water levels continue to fall at current rates).

The documentary even veers into Morgan Spurlock territory when it enlists a marketing team to see if it can sell recycled water to squeamish American bottled-water consumers. The mad men dub the product "Porcelain Springs" and enlist Jack Black as its spokesman. The time wasted on this silly sequence could have been better used for a discussion of how to reduce the vast amount of drinkable water that wealthy societies squander in toilets and urinals.

The movie presents grim assessments from such experts as the Pacific Institute's Peter Gleick and professor and author Robert Glennon, yet it ends with a flurry of hopeful notes. The Jordan River is offered as an example of a declining water resource that is being rehabilitated despite major political differences (in this case, among Israelis, Jordanians and Palestinians).

That's encouraging, but perhaps not representative. Last Call at the Oasis would probably be less upbeat if it had spent more time in Asia, Africa and the Middle East.