Accessibility links
Greenland's Ice Melting More Slowly Than Expected While the glaciers hold enough water to raise sea level feet by 20 feet, a new study says the runaway meltdown of Greenland's ice isn't happening as some had feared. This means a "worst-case scenario" of 6 feet of sea level rise by the end of this century is unlikely, a polar researcher says.

A new study has some reassuring news about how fast Greenland's glaciers are melting away.

Greenland's glaciers hold enough water to raise sea level by 20 feet, and they are melting as the planet warms, so there's a lot at stake.

A few years ago, the Jakobshavn glacier in Greenland really caught people's attention. In short order, this slow-moving stream of ice suddenly doubled its speed. It started dumping a whole lot more ice into the Atlantic. Other glaciers also sped up.

If the world's big glaciers were on their way to a 10-fold speedup, that could lead to a staggering 6 feet of sea level rise by the end of this century. So Joughin and colleagues have been trying to see if that acceleration is under way.

They pored over radar images of 200 Greenland glaciers gathered over the past decade. Graduate student Twila Moon says some of Greenland's glaciers picked up the pace and started surging forward more than 5 miles in a year. 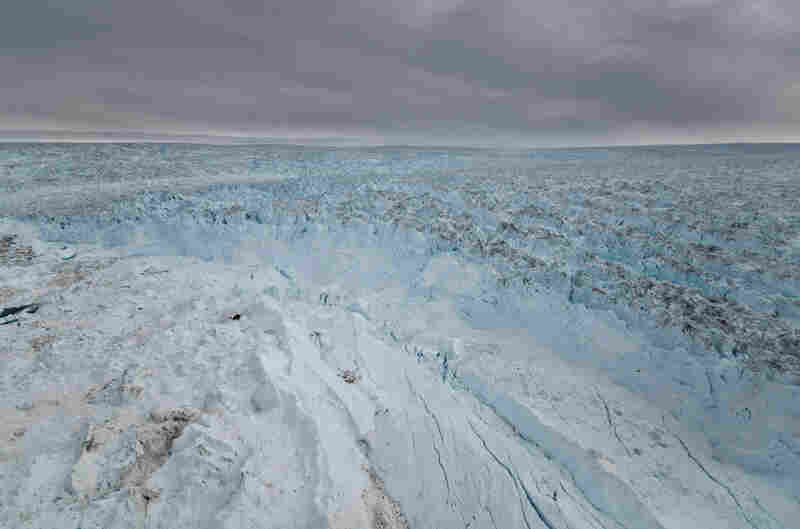 Massive sections of ice (center front) have broken away from the Jakobshavn glacier into the sea. There's enough water stored in Greenland's glaciers to raise the sea level by 20 feet. Ian Joughin/Science/AAAS hide caption 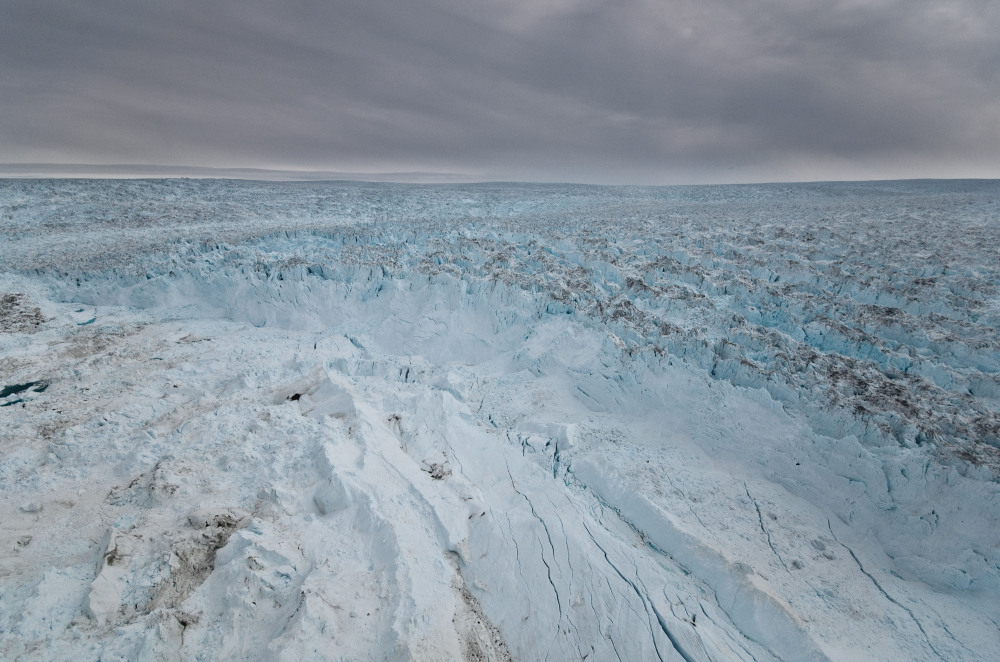 Massive sections of ice (center front) have broken away from the Jakobshavn glacier into the sea. There's enough water stored in Greenland's glaciers to raise the sea level by 20 feet.

"It turns out that glacial pace isn't very slow," she says.

It also turns out that glacial pace isn't consistent. The glaciers like Jakobshavn that started surging haven't kept on picking up speed. In fact, some have slowed down. And glacier speeds vary dramatically.

Picture streams of ice that start out as one giant river and then split into two on their way toward the ocean.

"We saw cases where one of those might be consistently speeding up, while the one right next to it might speed up one year, slow down the next, speed up again," Moon says.

When they added up what all those glaciers were doing during the past decade, they saw a 30 percent increase in speed overall.

"We're still seeing velocities increase so we can expect to see continued sea level rise from the Greenland ice sheet," she says. But their report in Science magazine says they aren't seeing the runaway meltdown of Greenland that some had feared. That makes sense to Joughin, given the lay of the land.

"All of the ice flows towards the coast and squeezes through these narrow outlet glaciers, much like toothpaste squeezing out the nozzle of a toothpaste tube," he explains.

Race To The Arctic

That imposes a natural limit on how much ice can flow off the bedrock. But those bottlenecks don't exist in Antarctica, where other glaciers are also surging toward the sea. So that's still an important wildcard.

But given what's happening in Greenland, the worst-case scenario, for 6 feet of sea level rise this century, is looking very unlikely to Joughin.

He isn't breathing a sigh of relief, though. Three feet of sea level rise would still threaten millions of people around the world who live near sea level.

And Josh Willis, who studies sea level from NASA's Jet Propulsion Laboratory in Pasadena, Calif., says oceans won't magically stop rising at the end of the century under any scenario, "so we're going to see a lot more sea level rise. The question is: How fast is it going to come, and are we going to be able to adapt in time?"

But it's hard to plan if you don't know whether sea level will rise 1 foot in this century — which is the low-end estimate — or 6 feet.

"The difference between 1 foot and 6 feet is really enormous in terms of cost and adaptation and mitigation measures," Willis says.

Narrowing that uncertainty requires gathering more observations from satellites. But that's a problem: Those eyes in the sky are going blind. The National Research Council notes with alarm that Earth-observing satellites are wearing out much faster than they're being replaced. With budget troubles, the U.S. could lose most of its Earth-observing capacity in just eight years.