Accessibility links
Put Away The Bell Curve: Most Of Us Aren't 'Average' For decades, teachers, managers and parents have assumed that the performance of students and employees fits what's known as the bell curve — in most activities, we expect a few people to be very good, a few people to be very bad and most people to be average. But new research argues that a lot of people are actually outliers. 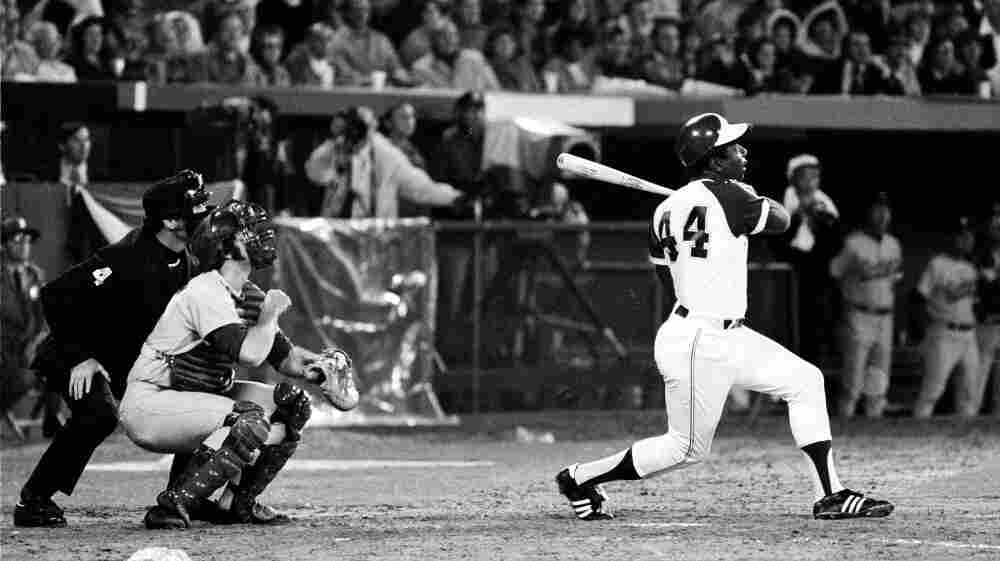 Hank Aaron breaks Babe Ruth's record for career home runs as he hits No. 715 at Atlanta-Fulton County Stadium on April 8, 1974, on his way to a career 755 home runs. Research suggests that in a wide variety of professions, including collegiate and professional sports, a small but significant number of individuals perform exceedingly well and the rest of individuals' performance trails off. AP hide caption

The bell curve powerfully shapes how we think of human performance: If lots of students or employees happen to show up as extreme outliers — they're either very good or very bad — we assume they must represent a skewed sample, because only a few people in a truly random sample are supposed to be outliers.

New research suggests, however, that rather than describe how humans perform, the bell curve may actually be constraining how people perform. Minus such constraints, a new paper argues, lots of people are actually outliers.

The study examined the performance of 633,263 people involved in four broad areas of human performance: academics writing papers, athletes at the professional and collegiate levels, politicians and entertainers.

"We looked at researchers, we looked at entertainers, we looked at politicians, and we looked at collegiate as well as professional athletes," Aguinis said in an interview. "In each of these kinds of industries, we found that a small minority of superstar performers contribute a disproportionate amount of the output."

In 186 out of 198 groups ranging from physics professors and Grammy nominees to cricketers and swimming champions, researchers Ernest O'Boyle Jr., of Longwood University's College of Business and Economics, and Herman Aguinis at Indiana University's Kelley School of Business found that a sizable number in the group were superstars.

These superstars, moreover, accounted for much of the success of the group as a whole. The vast majority of the others in the group, Aguinis said, were actually performing below the mathematical average.

More than 80 percent of all Emmy-nominated entertainers, for example, fell below the mean in terms of the number of nominations they received. A small but sizable minority, meanwhile, enjoyed outsize success and accounted for a disproportionately large number of Emmy nominations.

Aguinis said the bell curve may describe human performance in the presence of some external constraint — such as an assembly line that moved at a certain speed.

"If you had a superstar performer working at your factory, well, that person could not do [a] better job than the assembly line would allow," Aguinis said. "If you unconstrain the situation and allow people to perform as best as they can, you will see the emergence of a small minority of superstars who contribute a disproportionate amount of the output."

Aguinis said his findings were descriptive, not prescriptive. He said the findings should not be interpreted to mean that managers and teachers should only focus on the superstars and ignore everyone else.

At the same time, he said, successful companies and nations would do well to identify superstars, because such performers were disproportionately likely to register new discoveries and achievements.