Accessibility links
Gingrich Out Of The Race, But Still In Debt The former House speaker said Wednesday that he's suspending his presidential campaign, and he's ready to help the presumptive Republican nominee, Mitt Romney, battle President Obama. But Newt Gingrich might have a more pressing problem: His campaign has about $4 million in debt. 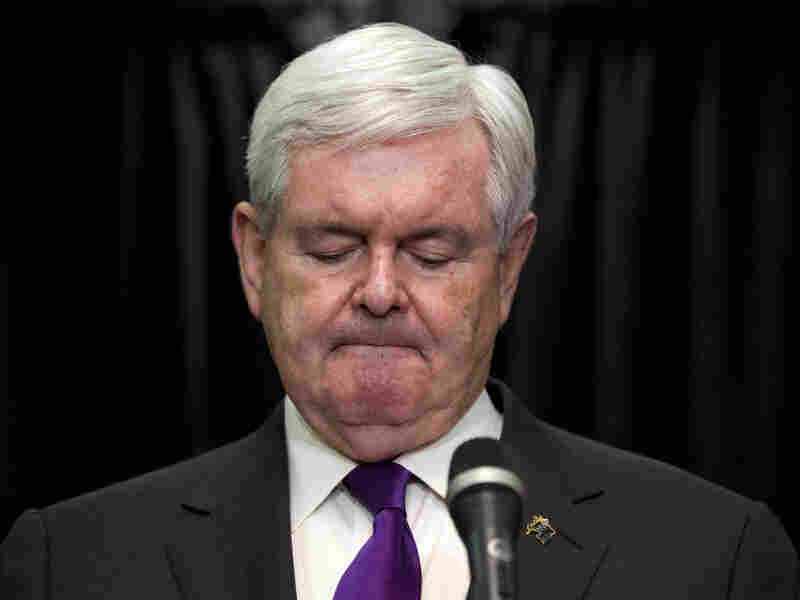 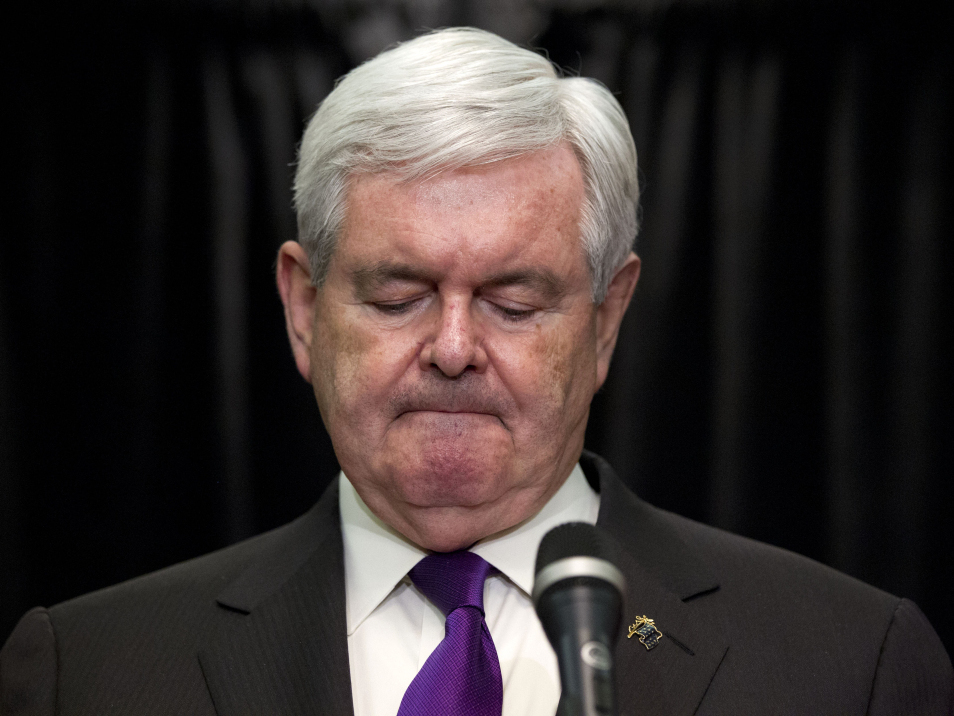 Former House Speaker Newt Gingrich pauses while announcing that he is suspending his presidential campaign Wednesday in Arlington, Va.

Newt Gingrich is officially out of the presidential race. The former House speaker said Wednesday that he's suspending his campaign, and he's ready to help the presumptive Republican nominee, Mitt Romney, battle President Obama. But Gingrich might have a more pressing problem: His campaign has about $4 million in debt.

In Gingrich's exit speech, he opened by thanking people — first his family, then his financial backers.

"I also want to single out, first of all, the over 179,000 donors who helped us at Newt.org and who helped make the campaign possible," he said.

Yet those donors weren't nearly enough to keep up with Gingrich's spending.

'Eternally Optimistic, Until They Lose'

Most of all, he was spending money to raise money. Federal Election Commission data, compiled by the nonpartisan Center for Responsive Politics, show that the campaign spent 32 cents of every dollar on fundraising.

"I think presidential candidates are eternally optimistic, until they lose," says Karl Sandstrom, a Democratic campaign finance lawyer who formerly served on the Federal Election Commission.

"They ... are able to convince the creditors they're not a bad bet. Often, they turn out to be a bad bet," he says.

The Gingrich campaign owes the most — $1 million — to a charter airplane company, Moby Dick Airways Ltd. Company president Roy Oakley said he "has assurances from the speaker that they're going to make good on it."

Gingrich himself isn't liable for these debts, and the campaign is paying off some bills. Back in February, he was at the Bing Crosby Theater in Spokane, Wash., for the last vote before Super Tuesday.

Help From The Nominee?

There's one common way for a presidential primary candidate to pay off those debts: getting the nominee to hit up his donors to finance it.

It's something that presidential candidate Obama did for Hillary Clinton just about four years ago.

Now Romney's campaign has offered to be helpful as Gingrich works on retiring the debt.

Like a lot of the GOP establishment, Republican campaign finance lawyer Jan Baran has had a run-in with Gingrich. Sixteen years ago, he represented Gingrich in the House ethics probe but then quit.

Baran says Republicans tend to like the show of unity when the nominee helps the other candidates.

"It really depends on how much in the hole Gingrich is, but there certainly will likely be some effort to help retire some of his debt," he says.

After all, Romney wants Gingrich's supporters to climb aboard his bandwagon. Plus, Gingrich wants to remain a player, even if he can't be the nominee.