Accessibility links
A Need For Speed: Inside Jamaica's Sprint Factory When it comes to sprinting, Jamaica reigns supreme. And what, exactly, makes Jamaicans so fast? Some say it's in the food; others point to genetics. But let's start with the obvious: In Jamaica, kids really like to run. 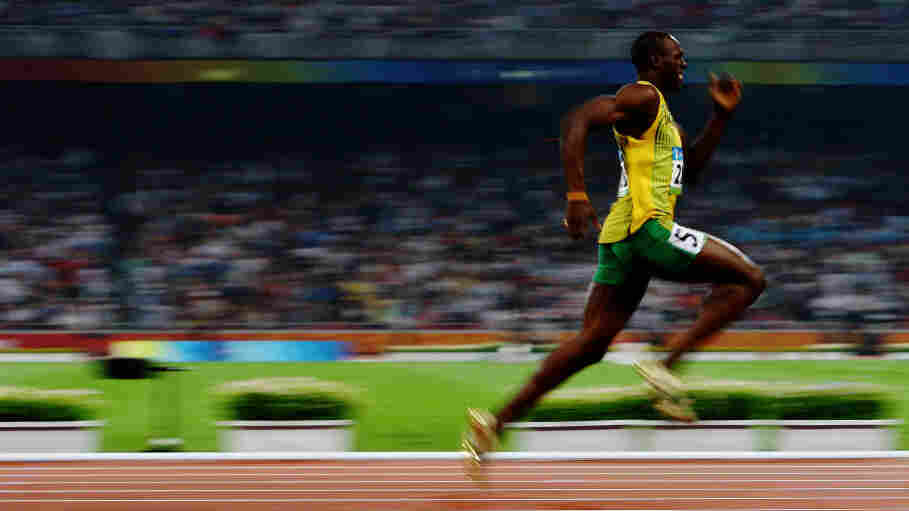 Jamaica's Usain Bolt shattered world records in the 100 and 200 meter races at the 2008 Beijing Olympics. Shown here in the 200 meters at Beijing, he's looking to repeat this summer at the London Olympics and add another chapter to Jamaica's great tradition of sprinting. Julian Finney/Getty Images hide caption

When it comes to sprinting, Jamaica reigns supreme.

At the Beijing Olympics in 2008, a Jamaican man — Usain Bolt — and a woman — Shelly-Ann Fraser-Pryce — took home the golds in the 100-meter race, and at this summer's London games, they're hoping to do it again.

If you visit the Caribbean island nation, you'll hear a lot of explanations for why they're so good, but let's start with the obvious: In Jamaica, kids really like to run.

Locksley Anderson is a coach at Mona Preparatory School, a private school in Kingston. His kids get to run on the grass track at Jamaica's University of Technology, or UTech, at the foot of the scenic Blue Mountains. His runners are as old as 12 and as young as 6. 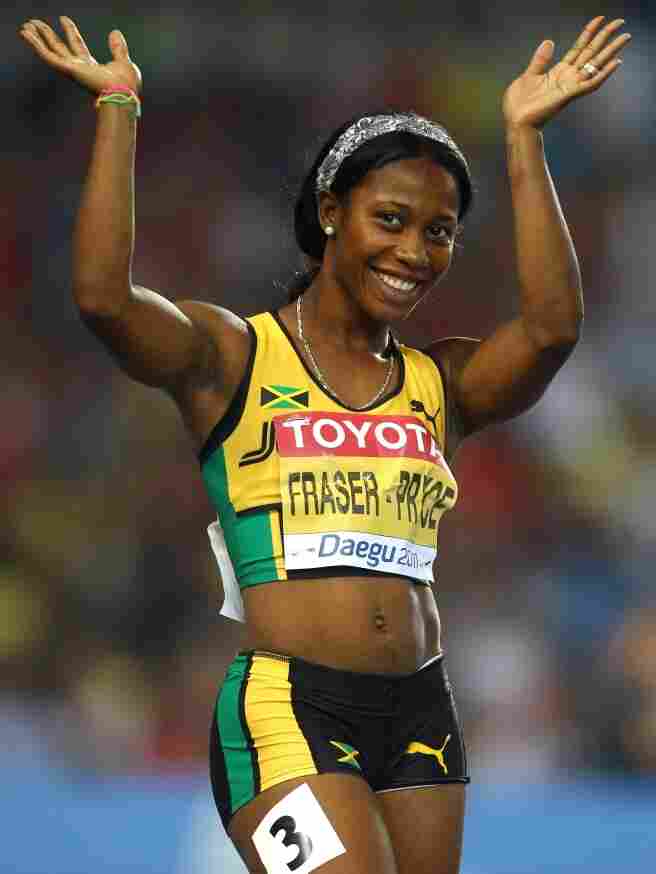 Shelly-Ann Fraser-Pryce waves after competing in the 100-meter semifinal at the World Athletics Championships in South Korea last year. Fraser-Pryce won gold at the 2008 Olympics, and is viewed as a hero by the Jamaican children she sometimes shares a track with. Alexander Hassenstein/Bongarts/Getty Images hide caption 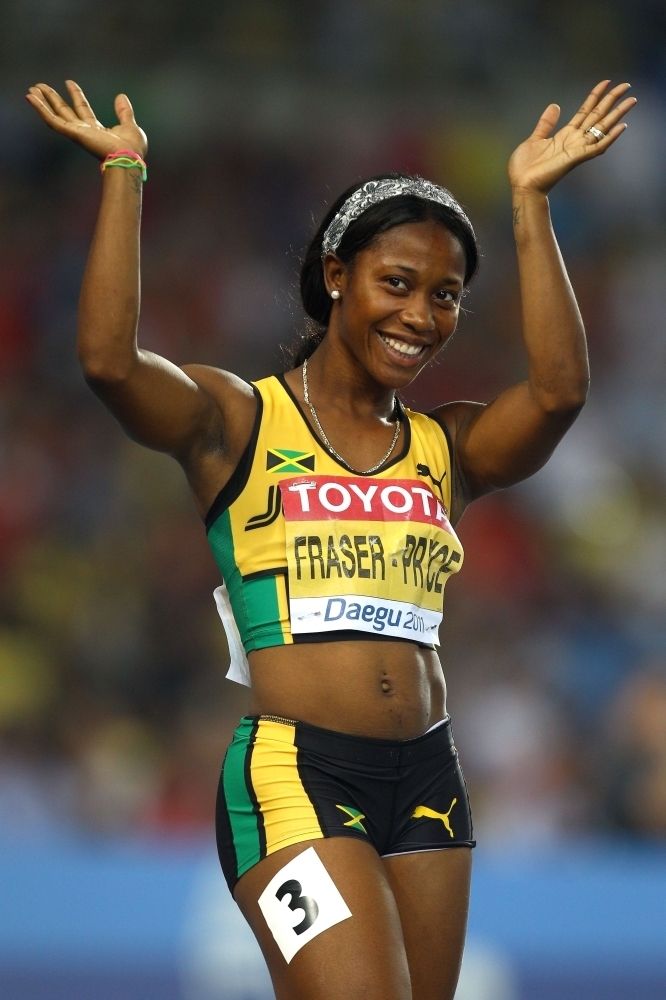 Shelly-Ann Fraser-Pryce waves after competing in the 100-meter semifinal at the World Athletics Championships in South Korea last year. Fraser-Pryce won gold at the 2008 Olympics, and is viewed as a hero by the Jamaican children she sometimes shares a track with.

It's not a real 4x100 relay — the track is only 300 meters around. For the 6- and 7-year-olds, he divides it into four legs of 75 meters each. Getting the teams stationed in place around the track looks a bit like herding cats. The kids seem more interested in romping around than competing. Anderson says that for kids this young, running is just about having fun.

When they're done, the Mona Prep kids file off the track and call out to the lone figure of a 5-foot-3-inch woman, a superstar, who is sitting on the grass stretching. She is Fraser-Pryce, winner of the 100 meters at the Beijing Olympics. Like Bolt, the men's gold medalist, and other great Jamaican sprinters of the past, Fraser-Pryce is a hero to Jamaican kids.

Fraser-Pryce, 25, grew up poor. She's the daughter of a single mother who worked as a "higgler," or street vendor. She says she started taking track really seriously when she was 21 and running for Coach Stephen Francis at UTech.

"When I came here at UTech, everybody was saying I was too short and I shouldn't think about running fast, it's going to take me a while to run fast," Fraser-Pryce says. "I had a really bad running posture, like I ran, literally, dropping on my face. Stephen saw all of this and, as a coach, he analyzed and he took a year to actually go through my core needs." 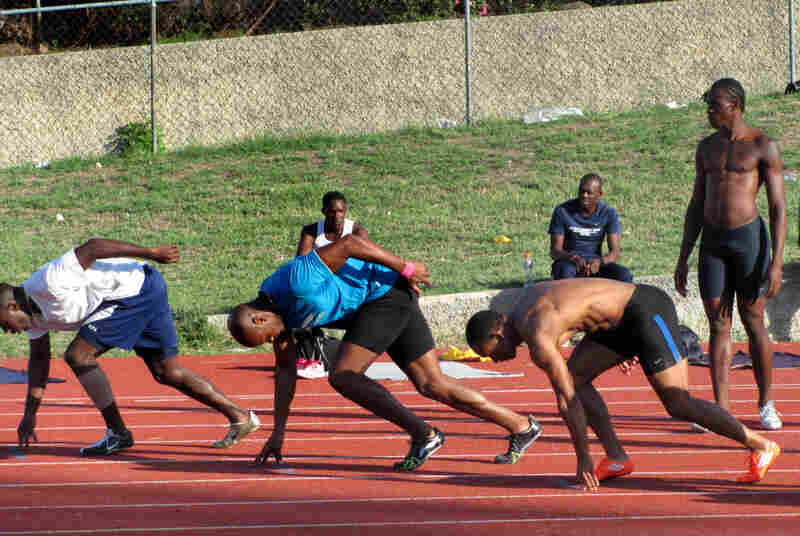 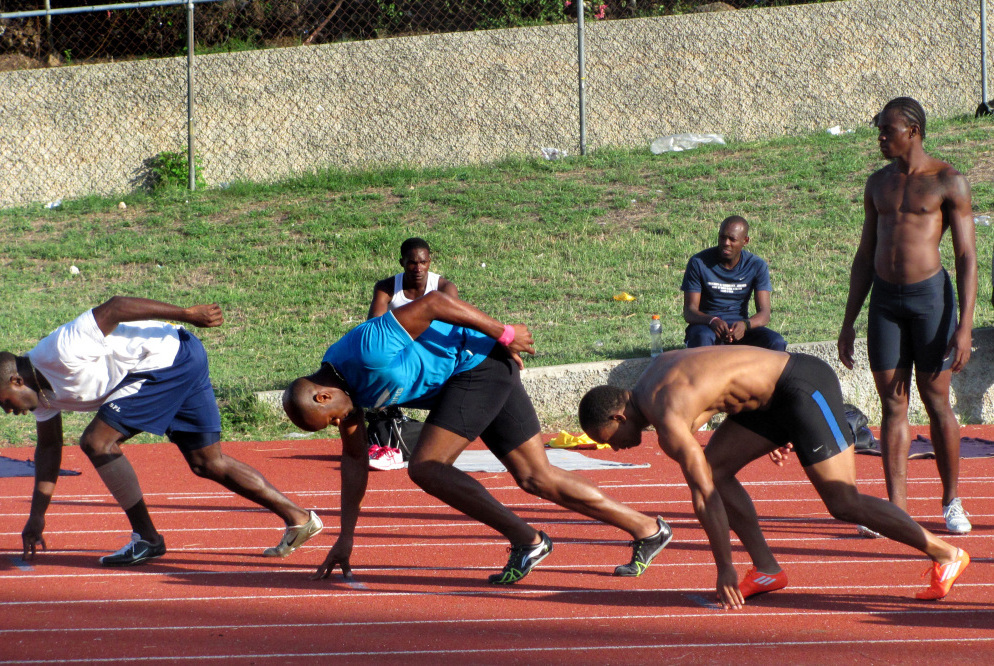 Fraser-Pryce works out with the MVP Track and Field Club — MVP stands for "Maximizing Velocity and Power" — and the UTech track team at one of the country's few world-class, synthetic tracks — the National Stadium in Kingston.

Her mentor, Stephen Francis, coaches both MVP and the UTech men. Francis is a physically thick man and not a big talker. He sits on a club chair in the track infield barking the occasional instruction via bullhorn ("What to do with you people! Move it!") when he isn't absorbed in his stopwatch.

Morning workouts start at 6. The place is pretty empty when the runners arrive and start to warm up. They run multiple sprints in fairly quick succession. Fraser-Pryce runs seven, and some of the other sprinters run nine. It's incredibly taxing.

The MVP group running at daybreak is an amazing collection of talent. It has three members of the 2008 Olympic gold 4x100 men's relay team, including Asafa Powell, former world record holder in the 100 meters. It also has former world champion hurdler Brigitte Ann Foster-Hylton.

Since 1948, Jamaica has won 13 Olympic gold medals in track competitions. Here are some of the highlights:

The Philosopher King Of Jamaican Sprinting

Today's Jamaican track coaches have reversed a long-standing pattern. It used to be that Jamaican sprinters, who were typically poor, ran to get scholarships at American colleges where facilities and coaching were superior, but the surroundings were foreign. Now, with better coaches, most of the country's Olympic runners train at home.

Powell says that for him, staying in Jamaica makes a difference. "The atmosphere, the weather, everything is perfect," he says. "Family, friends — they're here. I'm comfortable training in Jamaica."

The change that allowed world-class Jamaican sprinters to actually stay in Jamaica came about, in large part, thanks to 72-year-old Dennis Johnson, the philosopher king of Jamaican sprinting.

Johnson, however, makes no claim to originality for his ideas. He was a world-class sprinter at San Jose State University in California in the 1960s and came home to Jamaica with the wisdom of the school's fabled track coach, Bud Winter. Winter had previously taught Navy fighter pilots to relax, and that was also his message to sprinters.

"He felt you could compete a lot better if you relaxed and, in the process, he developed a methodology and some drills, and it actually revolutionized the whole thing," Johnson says.

According to Johnson, people have the wrong idea about speed. He says a relaxed sprinter maintains speed, while the sprinter who's tight, who's concentrating too much, can tire fast or lose it at the end.

He asks, Yoda-like: Have you ever seen Usain Bolt come from the back and rush past the rest of the field? Yes? Well that's not really what you're seeing.

"What you saw was the other people tiring first," Johnson says. "Because you cannot increase speed after 6 seconds or 60 meters. It's a physiological impossibility."

The illusion of the champion sprinter accelerating past the field is really his consistency and their deceleration.

The best Jamaican coaches are Dennis Johnson's proteges, or the proteges of his proteges. And while all this coaching, plus motivation, plus hard work might be sufficient to account for Jamaica's successes, in Kingston, the explanations are just getting started.

A Shoe For Barefoot Runners

Jamaican Speed, According To Science

At Juici Patties, a Jamaican fast food chain on the campus of the University of the West Indies, university researcher Rachael Irving is ordering a breakfast of ackee and salt fish with yams, bananas and a cup of mint tea.

"This is what the Jamaicans usually eat before they start running," Irving says.

It's what just about everyone here eats. In Kingston, you hear a lot about yams and green bananas. They're the nutritional argument for Jamaican success in sprint events.

"It's [a] carbohydrate, and runners need carbohydrate[s] because that is what produces the glucose that is metabolized to give you the energy that drives the muscle to perform," Irving says.

Dr. Errol Morrison, an endocrinologist and the president of UTech, says Jamaican kids grow up on a diet that is so helpful, they might as well be taking a daily dose of steroids. And he goes a step further: What good nutrition unlocks in Jamaican athletes, he says, is a gift that is genetically endowed.

"These are athletes of black ancestry," Morrison says. "They have long limbs; they have little subcutaneous fat, which gives you a lot of reduction in all the drag, you know, in the weight that you have to carry around."

Then there's the phenomenon of narrow hips. According to Morrison, Jamaicans are built to lift their knees high when they run.

"Now, in sprinting, the knee lift is the fundamental principle," he says, "how you lift that knee, extend the leg and your stride length. So not only have you got the long limbs, but we have an angulation of the pelvis so the muscles there that lift the knee have a direct line of sight, as opposed to in the white or the [Asian pelvis] where you're literally sliding up." 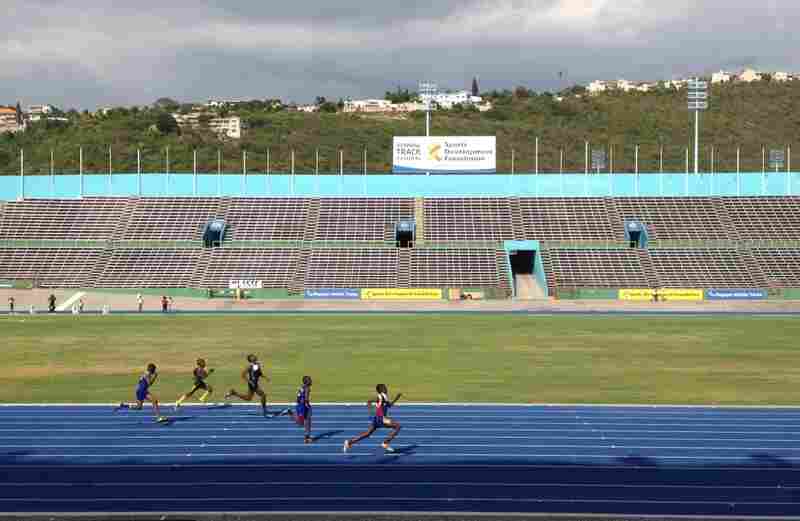 Jamaican teens and preteens compete in the island's track championships at the National Stadium in the capital, Kingston. Viet Le/NPR hide caption 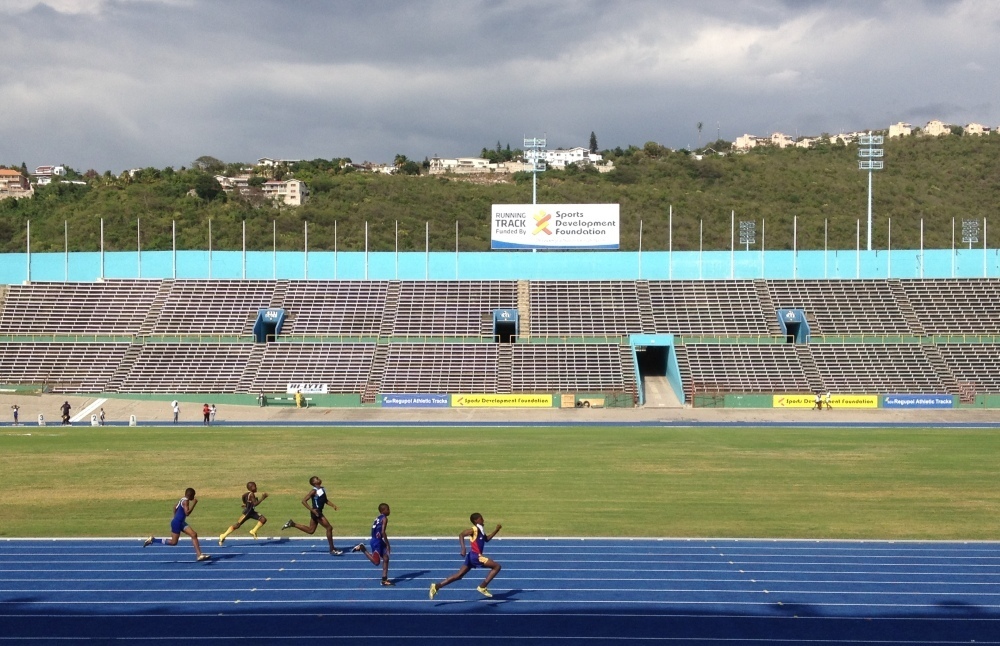 Jamaican teens and preteens compete in the island's track championships at the National Stadium in the capital, Kingston.

But if Jamaican sprinters are so genetically well-endowed, does that mean there's a speed gene, some inherited trait that distinguishes the elite runner from the broader population?

Both Morrison and Irving have collaborated with Yannis Pitsiladis at the University of Glasgow on just that question. Pitsiladis has studied a DNA bank of samples from hundreds of Jamaican and African-American sprinters, not to mention Kenyan middle-distance runners and Ethiopian marathoners. He says he started out hopeful of finding a speed gene.

"We were so convinced by arguments that had been put forward by other scientists, by the media, that these populations like the Jamaicans have the right genes, that we thought it'd be easy enough to just go to the island, collect DNA samples, analyze them, come up with those genes and there's the end finding," Pitsiladis says. "Four to five years later, I can tell you that we have been looking at the genes and, in one line, I have to say that we have found no genetic evidence for the phenomenon that we're observing in Jamaica."

It's not that genes play no role; it's that the genes of elite sprinters just aren't that different. As for the diet of yams and green bananas, Pitsiladis says: "I know that works very well, and I've even co-authored some abstracts with Professor Morrison on this, and I would say that there's actually even less evidence to defend that argument than there is on the genetics."

In other words, there are lots of countries where people eat yams or similar tubers, and those countries aren't all known for their sprinters.

There is, of course, a cynical explanation for the rise of Jamaican sprinting: Some say they're doping and just masking the drugs better than others. But the country's suspension record isn't especially bad.

As for Pitsiladis, there's one explanation he can offer for the country's success: Look at how Jamaicans regard sprinting, he says: It's like a religion.

They're Good Because They Want To Be

At a primary and middle school track meet in Kingston's National Stadium, crowds of teens and preteens decked out in school colors blast plastic horns and cheer on their runners and jumpers.

The best of these young athletes are being scouted by high school coaches — the National High School Championships, or Champs, are a huge national event in Jamaica.

While there's a persuasive kernel of truth to just about every explanation for Jamaican success in sprinting, nothing explains it better than this scene at the National Stadium. Perhaps Jamaicans are the world's best sprinters because that's what they really want to be.