Accessibility links
For College Seniors, One Last Lap Before Graduation Requiring students to pass a swimming test to graduate was once a widespread tradition. Today, only a handful of colleges still require the exams. Some schools are trying to persuade procrastinators to put the test behind them long before their last college semester. 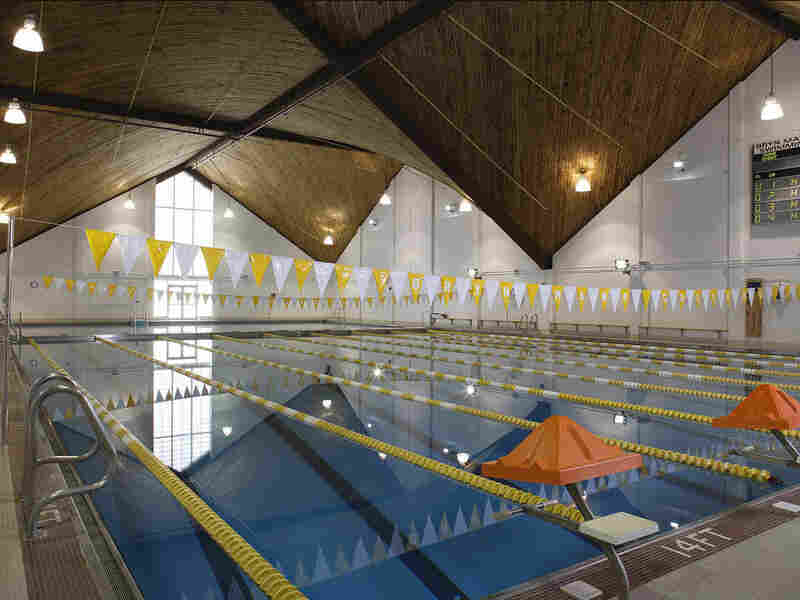 The pool at Bryn Mawr College's Bern Schwartz Fitness and Athletic Center. Bryn Mawr is one of a handful of colleges that requires students to pass a swimming test to graduate. Courtesy of Bryn Mawr College hide caption 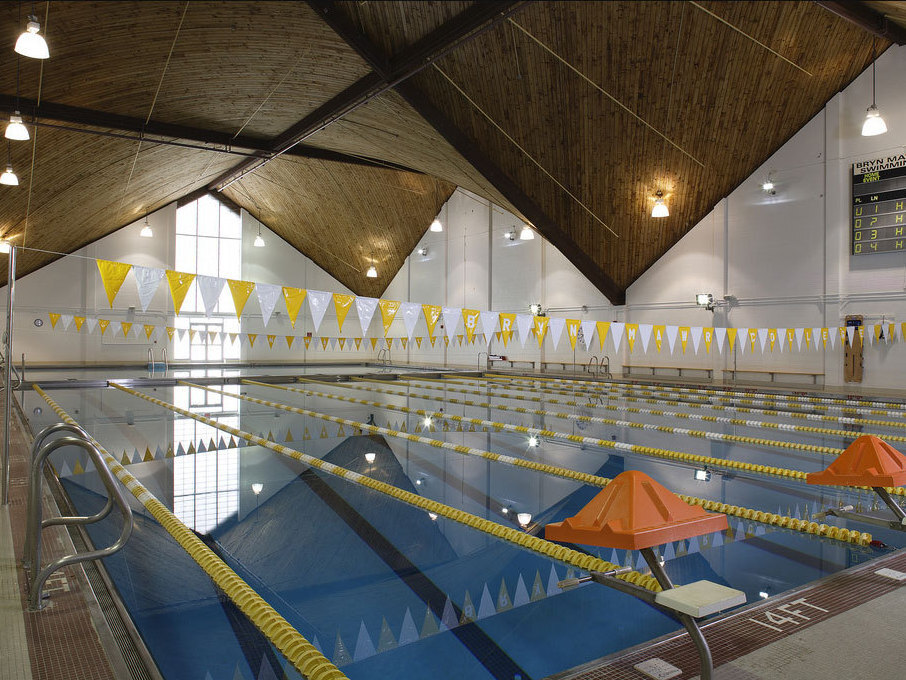 The pool at Bryn Mawr College's Bern Schwartz Fitness and Athletic Center. Bryn Mawr is one of a handful of colleges that requires students to pass a swimming test to graduate.

It's spring, the season when many college students are cramming for final exams. But it's also when some college seniors must prove they can literally stay afloat.

A swim test is still a graduation requirement on a handful of U.S. campuses, mostly in the Northeast. For seniors who have been putting off the exam, it's time to sink or swim.

On a recent evening, a handful of seniors at Bryn Mawr College in Bryn Mawr, Pa., gather nervously at the edge of the campus pool, waiting to take the last swim test of the school year.

Bryn Mawr's test consists of 10 minutes of continuous swimming, followed by one minute each of floating and treading water.

"The key to this is going slow," explains Nikki Whitlock, the college's swim coach and aquatics director. "It does not matter how many laps you do, OK? It only matters that you are swimming for the 10 minutes continuously."

A century ago, many colleges required students to pass a swim test. Today, just a few holdouts — including Bryn Mawr, Cornell, Columbia, MIT and Swarthmore — cling to the tradition.

Swarthmore alumnus Maurice Eldridge, class of 1961, remembers his swim test vividly. "We were given our mandatory physicals," he says, "and were told to jump in the pool. And I jumped in the pool and sank, like a log."

Eldridge eventually passed the test. Now Swarthmore's vice president for community and college relations, even he isn't sure exactly when — or why — the school, just outside Philadelphia, began requiring a swimming test.

"There's a story that has floated around having to do with someone drowning, and then some person of that family providing money with the stipulation that everybody learn to swim," Eldridge says. "But I can't find any credible reason for believing that."

Indeed, there was a Swarthmore student, Herschel Ware, who drowned in 1912. Ware's relatives later donated money to build the campus swimming pool. But Eldridge says there's no record of any connection between those events and the college's mandatory swim test.

How Should We Test Students' College Educations? March 22, 2012

Still, the rumors persist — and not just at Swarthmore.

Samuel Roth, a senior at Columbia University in New York, says "some people say some wealthy donor student drowned or died on the Titanic or something."

Columbia requires a swim test for students in certain academic programs, but not others. Roth has heard plenty of theories behind what seems to some students an arbitrary requirement.

"If [Manhattan] were flooded, we'd need to know how to swim to get to New Jersey," Roth says. "But then, of course, the engineers don't have to do it. They say we could build a boat, which, to me, is totally ridiculous because you're not going to do that during flooding."

As swim tests go, Columbia's is pretty easy — just three laps of the pool using any stroke. Still, Roth waited until spring of his senior year to take it.

Junior Will Hughes says that kind of procrastination is hardly unusual. "It's this big thing ... to take it your senior spring," he says. "You do it with all your senior friends. Especially in April ... there's hundreds of people that go there to do it together."

Whitlock would like to persuade her students not to wait until the last minute. The college is following Swarthmore's lead, where administrators try to get students into the pool during freshmen orientation.

And for students who are truly scared of the water, Bryn Mawr offers a class in basic water safety. Senior Leila Zilles took it this spring.

"Before I took the swim class, I couldn't even float," Zilles says. "Now that I've learned to float, I can say that even though I'm still scared to fall into the deep end of the pool, I would know what to do."

Whitlock seems pleased with that. "I have not, in my six years here, had a student fail to meet the requirement and not graduate," she says. "And I'm not looking to start in 2012."