Accessibility links
'Dejected': Some Unemployed Give Up The Hunt Unemployment slipped to 8.1 percent last month, in part because fewer job seekers were applying for positions. "I've been feeling very dejected and depressed," says one woman who has stopped looking for work. The share of adults working or seeking jobs is down to the lowest level since the 1981 recession. 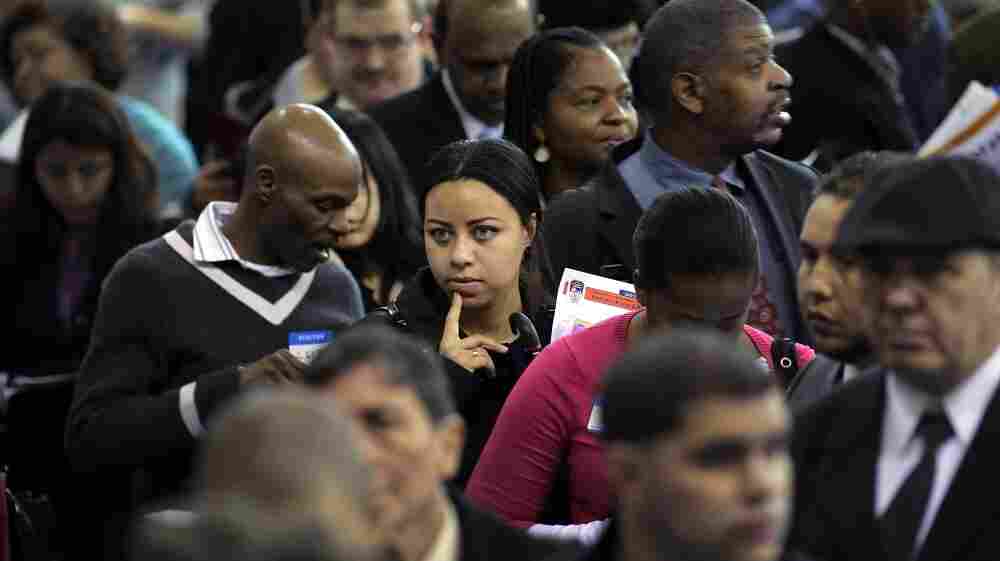 People wait at a job fair in New York City's Queens borough on Thursday. While millions of out-of-work Americans continue to seek employment, others have given up looking. Spencer Platt/Getty Images hide caption 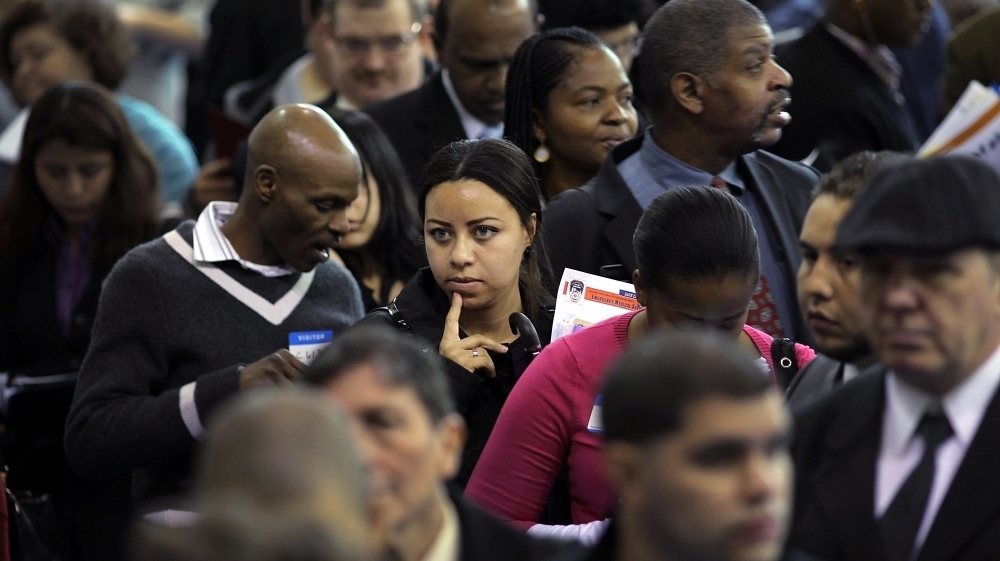 People wait at a job fair in New York City's Queens borough on Thursday. While millions of out-of-work Americans continue to seek employment, others have given up looking.

The unemployment rate slipped a notch to 8.1 percent in April, but not because employers went on a hiring spree.

Instead, the jobless rate appeared to improve because fewer people were applying for positions. Last month, the civilian labor force shrank by 342,000 people.

Economists say many of those workforce dropouts were "discouraged" workers who moved to the sidelines after months, even years, of trying to nail down jobs.

Traci Polacco has just joined the ranks of the discouraged. She had been working as an intake coordinator at a Denver hospital when she got laid off in November. For months, she tried hard to find a job.

The "broader unemployment rate," or U-6, includes the unemployed, those working part time because they cannot find full-time work, or those who have given up looking.

This week, she made up her mind to stop looking. "I've been feeling very dejected and depressed," she said.

So she has moved in with her mother in Michigan, and is halting her job hunt until she can regroup. Her plan is to get accepted into a nurse's training program and find some sort of job this fall to help pay for her educational retooling.

For now, "I just needed to take some time off" from the disheartening job search, she said. "The frustration comes when you apply to places like Subway, and you're told you're overqualified."

The reasons for today's discouraging job market are numerous. One factor is the loss of state and local government jobs amid budget cutbacks. Last month, private employers added 130,000 jobs, but governments cut 15,000 positions. That meant April saw total job growth of just 115,000, down from March's revised total of 154,000 jobs.

Most economists had estimated that employers added about 160,000 last month, so the Labor Department report was seen as a disappointment even though the jobless rate slipped from 8.2 percent to 8.1 percent.

With so many workers dropping out, the share of adults working or seeking jobs is down to 63.6 percent. That's the lowest level since the 1981 recession, when far fewer women were in the paid workplace.

This trend toward a smaller workforce has been in place for some time now. In 2011, roughly 2.7 million people left the job market, and only 945,000 came into it. There are lots of reasons for this — some benign and some very worrisome.

Among the not-so-bad reasons: More baby boomers are entering their early 60s and retiring. In theory, they could keep working or looking for work, but many are retiring when they reach 62 and become eligible for some Social Security benefits.

Many younger people are choosing to leave the labor force to return to the classroom and improve their job skills, and others are staying home with young children or aging parents.

But substantial numbers of potential workers have been unemployed for so long that they are dropping out and hunkering down. 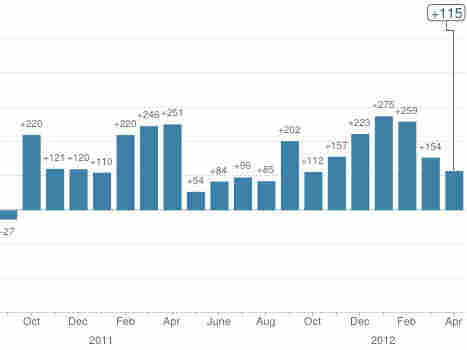 People tend to drop out after a long stretch of unemployment — and those searches have been especially lengthy during the Great Recession and its slow-moving recovery. The latest Labor Department report shows that in April, unemployed Americans were out of work on average for 39.1 weeks, or about nine months. More than 4 in 10 unemployed workers haven't seen a paycheck for six months or more.

The reasons for the underperforming job market are numerous. One factor is improving technology, which can allow employers to boost output without adding workers. U.S. companies are actually creating more goods and services than they were back in 2007 — before the recession — and yet they have about 5 million fewer people on their payrolls.

Some economists say things may get better before too long because the jobs report did contain some bright spots. For example, the job-creation numbers for March and February got an upward revision by a total of 53,000.

Alan Krueger, who heads the White House Council of Economic Advisers, said in a statement that while "much more remains to be done" to fix the labor market, the private sector is improving.

Private sector jobs have grown "for 26 straight months, for a total of 4.25 million payroll jobs over that period," Krueger said. Factories have added 489,000 jobs since January 2010, he noted.

As for Polacco, she says she will pick herself up in the fall and resume her job search while pursuing her goal to become a nurse. "I'll be hitting it hard again," she said. "I'm hoping I'll be able to find something then."