Accessibility links
Kee Facts: How Swiss Guards And Sacred Geese Saved Rome From Gauls to Goths to soldiers of the Holy Roman Empire, many outsiders have tried to destroy the Eternal City, with varying degrees of success. Rome has been defended repeatedly, by courageous fighters and once by a flock of geese. May 6 is the anniversary of the last and most devastating sacking of Rome. 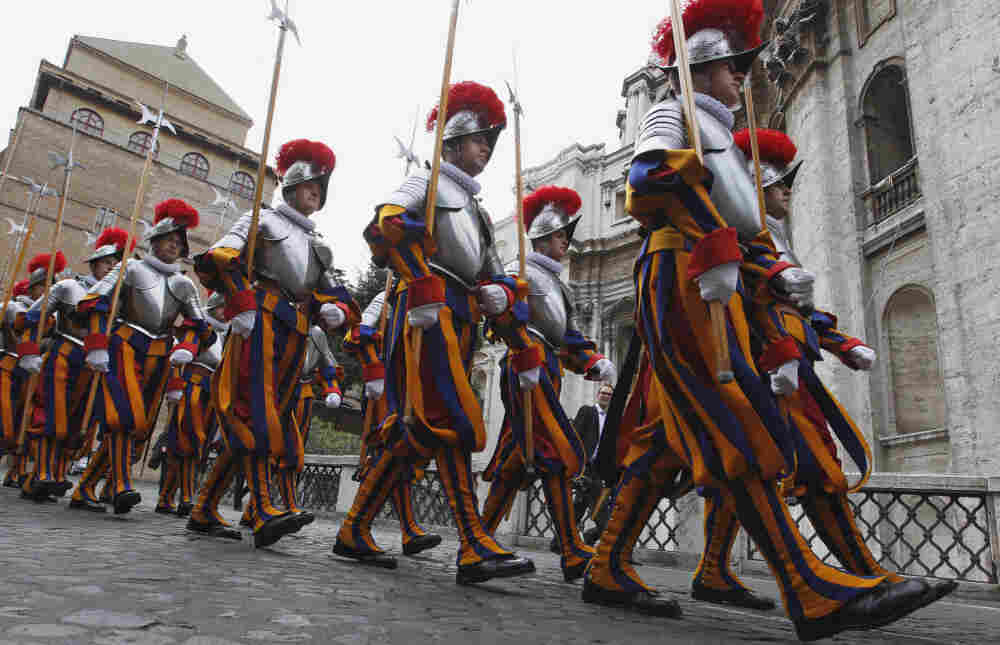 Swiss guards march prior to a swearing-in ceremony at the Vatican on Sunday. This year, 26 Swiss men are joining the oldest standing army in the world, swearing to give up their lives to protect the pope. The ceremony is held every May 6 to commemorate the day in 1527 when 147 Swiss Guards died protecting Pope Clement VII during the sack of Rome. Alessandra Tarantino/AP hide caption

Maybe you've heard of the sack of Rome? Not a paper or cloth bag, but more in the way a quarterback experiences it — attacked and plundered.

On May 6, 1527, mutinous troops of Charles V, head of the Holy Roman Empire — which is sometimes described as neither holy, Roman nor an empire — surpassed the horrors of earlier barbarian invasions. Churches and palaces were looted, nuns assaulted and citizens tortured and killed.

At the Vatican, the Swiss Guard was almost completely wiped out defending St. Peter's Basilica, fighting on the steps of the high altar. Pope Clement VII had to escape through the Passetto — the secret passageway made famous by the Dan Brown novel Angels & Demons — into the fortress of Castel Sant'Angelo, pretty much ending the Italian Renaissance.

In commemoration of the event, the swearing-in ceremony for new recruits to the Swiss Guard is held today, May 6, each year.

The 1527 sack of Rome is only the last time the city was savaged — so far, anyway. The Eternal City has actually been sacked a number of times, with varying levels of damage. The first raiders were the Gauls, about 2,400 years ago.

The Gauls had conquered all of the city except for the Capitoline Hill, which the Romans defended vigorously. According to legend, Gallic troops tried to sneak up the hill during the night, but disturbed a sacred flock of geese that lived in the temple of Juno. Their honking was loud enough to alert the Roman guards, who threw the invaders off the holy hill.

Later attempts to destroy Rome were made by Alaric and the Goths, who swooped down from the north in 410, then by the Vandals in 455 and the Suebians in 472. After Gothic kings had taken over the governing of Rome, they saw the city assaulted by their "cousins," the Ostrogoths, in 535 and 553. The Saracens arrived in 846, followed by the Normans two centuries later. For the past 485 years, invasions of Rome have been of the tourist variety.